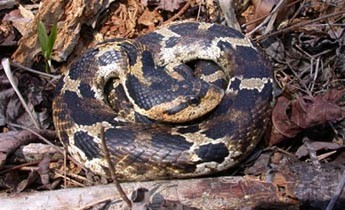 The North Carolina Department of Parks and Recreation is not trying to be funny. They are dead serious and want you to learn more about the reptiles around us. So, for some evil reason, they’ve let us all know there is a snake that plays dead.

These delightful little reptiles, when threatened, often play dead by rolling onto their backs and opening their mouths. Then they convulse for a short period and may defecate and regurgitate their food. Charming. 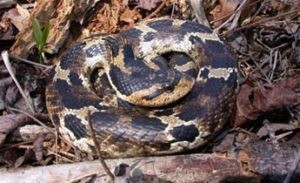 One variety of the eastern hognose snake. Photo from the University of Georgia.

Their real name isn’t zombie snakes, but it needs to be. They are better known as the eastern hognose snake (Heterodon platirhinos) and are not venomous. The color of these snakes is extremely variable. It can be red, green, orange, brown, gray to black, or any combination thereof depending on locality. They can be blotched, checkered or patternless. The belly tends to be a solid gray, yellow or cream-colored. In this species, the underside of the tail is lighter than the belly. This snake is found from eastern-central Minnesota, and Wisconsin to southern Ontario, Canada, and extreme southern New Hampshire, south to southern Florida and west to eastern Texas and western Kansas.

So yes, Mississippi. We have zombie snakes.

Related Topics:FeaturedSocial media
Up Next