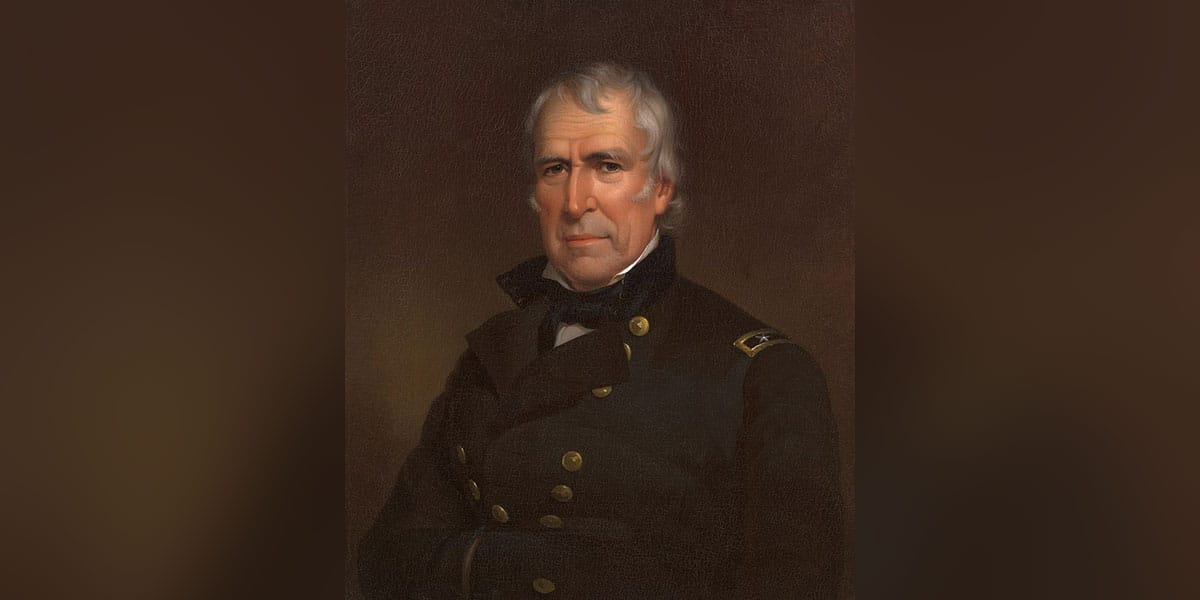 He was born in Virginia, grew up in Kentucky, and lived in many parts of the country, but when Zachary Taylor was elected president of the United States in 1848, he was a resident of Mississippi, living in Cypress Grove, his plantation south of Rodney in Jefferson County.

A sketch of the place in 1849 in Graham’s Magazine showed the house was a relatively simple farm dwelling, not at all palatial, for “Old Rough and Ready,” as Taylor was called, and his wife Margaret were not at all pretentious.

Taylor had owned the place a little more than a year when he began to seriously doubt the wisdom of his purchase. The flooding river was a problem, and the plantation was not as financially profitable as he had expected.

The last time Taylor saw Cypress Grove was in the pre-dawn hours of the last day in January 1849, the day he left for his inauguration as president (inaugurations then were held in March). He was aroused from a deep sleep by a blast of a steamboat whistle from the landing a few hundred yards from the house, and the old general, his wife, and the official escorting party sleepily walked down to the river, boarded the boat and went to the staterooms to finish their interrupted sleep.

It was midmorning when a ruckus on deck aroused the Taylors. The president elect eventually emerged from his room to discover he was on the wrong boat. He was to have ridden the elegant Tennessee but instead was a passenger on the less-luxurious Saladin.

It was really no accident. Capt. Tom Coleman of the Saladin, a friend — possibly a relative — of the Taylors had wanted the privilege of transporting Taylor to Washington, but Whig party officials had decided otherwise. That’s when the 24-year-old captain took matters into his own hands and docked at Cypress Grove.

The first member of Taylor’s escorting party to discover the ruse had accused Coleman of kidnapping Gen. Taylor. Coleman insisted he had done no such thing. He said Taylor had boarded the Saladin of his own free will, was uninvited, but Coleman would certainly not be so rude as to put the future president off the boat. If he wanted off, he would have to say so.

Gen. Taylor looked quite solemn when he confronted Coleman. He walked over to him, shaking his finger in his face “Tom, you scamp. What do you mean by getting me into this?” Taylor asked. And then he turned to the escorting committee: “Gentlemen, I reckon about all we can do now is take a drink.”

The Saladin brought Taylor on to Vicksburg where he made his first official stop for a reception on Court Square, where the Old Court House now stands. When he left Vicksburg after midnight, the Tennessee had still not caught up with him.

Not only was Taylor on the wrong boat, but he almost missed the boat entirely as far as the presidency was concerned, all because of a postage-due letter. When Whig Party supporters tendered the nomination, their letter arrived via steamboat, as was the custom of the day, and 10 cents postage was due. Taylor simply refused to accept the letter or pay the dime, so the captain paid it and Taylor eventually gave the OK.

He got the nomination without trying, even after having said “I do not care a fig about the office” and declaring he wouldn’t be interested even if he had no opposition. But, after edging out Winfield “Old Fuss and Feathers” Scott and Henry Clay at the convention (which he did not attend) he went on to defeat the Democrat, Lewis Cass, without campaigning. He was an ideal candidate — a national hero following the war with Mexico. He had no known political opinions, thus no political enemies. He had never voted. The Whigs needed a winner, and that man was Zachary Taylor. He didn’t look presidential, but his vice president, Millard Fillmore, did.

Though Washington, D.C., was far from Cypress Grove, when a young lady from England was making a tour of the country, collecting material for a book, Taylor insisted she visit his Jefferson County plantation. She arrived there Dec. 18, 1850, some six months after the president’s untimely death. She wrote that she was made comfortable before a blazing fire in the “primitive, though comfortable drawing room” until Richard Taylor, the president’s son, arrived from supervising the construction of a new steam sawmill.

The slaves were summoned to come to the house to greet the English visitor, and in less than 10 minutes they were there, the women wearing neat white dresses and woolen shawls and the men in flannel.

Taylor gave them some tobacco and then explained the operation of the plantation. Each day the slaves were furnished milk, bread, vegetables and meat, and on Sundays they were given coffee and butter and the ingredients to make pastries. The journalist later visited the quarters and met some of the children. She left the next day.

Though Zachary Taylor was to never return to Cypress Grove, he remained a legend on the plantation for many years. When explorer Willard Glazier canoed the Mississippi in 1881 and visited the place, he wrote that he listened to stories of “Old Zach” related with enthusiasm by former slaves.

Eventually Zachary Taylor’s descendants sold the plantation and little remains as he knew it. The diesel drone of a fleet of tractors has replaced the chant of those who once worked the seemingly endless fields. The house where they lived and Buena Vista Church where they worshiped — gone — yet their cemetery remains in an oasis of trees amid the freshly plowed cotton rows. Bits of broken glass designate the site of the big house, and from a river towhead several miles away comes the sound of a boat whistle, for the river that once flowed a few hundred yards in front of the house has moved.

Maps no longer carry the plantation name (which was changed to Buena Vista). Only Taylor Bayou and Zachary Taylor Light on the river hint at the importance of the place in history. When I visited there several years ago, workers on the plantation were unaware that it was once the home of a president.

“Zachary Taylor — wasn’t he president or something?” I was asked.

“Old Zach” is no longer a legend at Cypress Grove and remains unclaimed in Mississippi history.