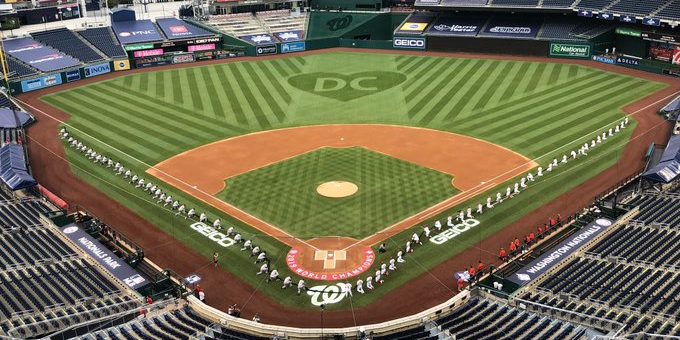 Coaches and players of the New York Yankees and Washington Nationals showed their support for the Black Lives Matters movement as they knelt before the game but stood during the National Anthem.

“We wanted to do something united, something together,” Yankees slugger Aaron Judge told the Associated Press after New York’s 4-1 victory.

“We’ve got a lot of guys in this clubhouse with different beliefs, different feelings, different walks of life and from different countries,” Judge continued, “and we want to respect all that and as a team, we came to the decision to kneel right before the anthem.”

Players from both teams also wore shirts that said Black Lives Matter on them during batting practice after the Yankees players decided Wednesday they wanted to kneel for 60 seconds before the anthem.

“We know there are issues in this country and we need changes. We need changes for the better. These guys all understand that,” Nationals manager Dave Martinez said. “This was for a major cause, we believe in it, and we did what we could.”

Different organizations around the country have shown support for the BLM movement after the death of George Floyd, a Black man who was killed by a white police officer in Minneapolis in May.

The Warren County – Vicksburg Library at 700 Veto St. has updated its services.

While still limited due to COVID-19 precautions, patrons can now access the following services: