A wrestling event held at Casino Vicksburg over the weekend has the wrestlers up in arms. The event, “The Inaugural Brawl,” was promoted by Heritage Wrestling, operated by Vicksburg local Thomas C. Parker. The wrestlers are claiming they have not been paid by the promoter and the event was not what they were promised.

In a series of social media posts about the events, the hashtag #heritagehoax is being used by the wrestlers to express their displeasure.

Pat Cook stated in a Facebook post, “We all showed to be the best we could be for the betterment of our respective futures and were left with questions, confusion, and resentment. Its certainly not fair to anyone involved in the Heritage Disaster.”

“Stood around for hours, helped set the ring up, wrestled TWICE, and got nothing,” complained Wess Warren.

A call was made to the events manager at Casino Vicksburg but at the time of this report, there was no response.

Also, an email was sent to Thomas C. Parker today asking him to clarify the claims and allegations. He responded via email, “No Comment.” 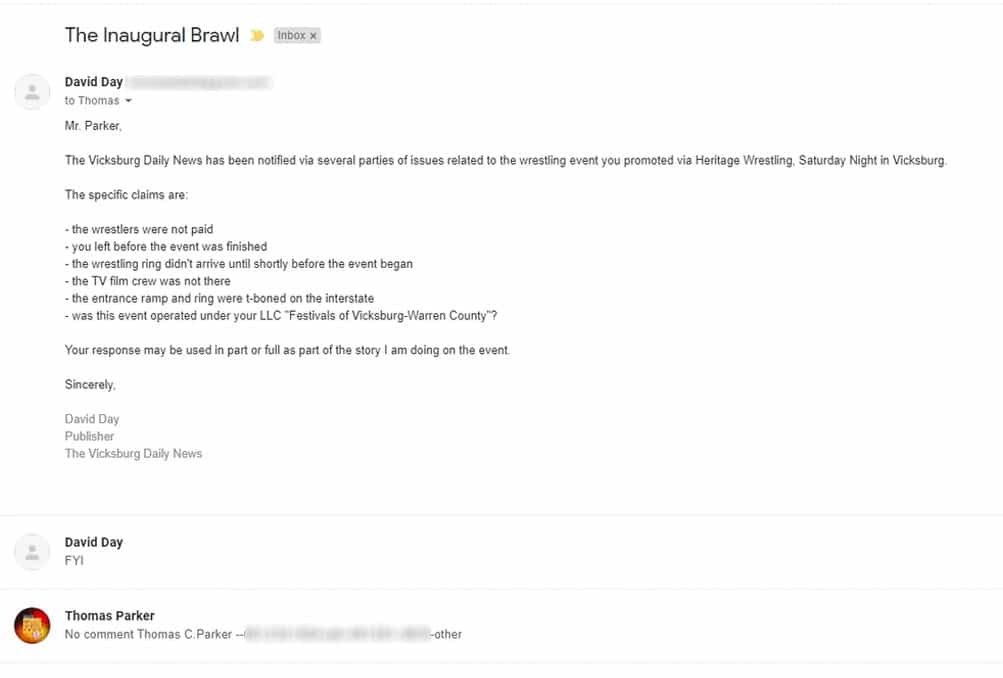 Wess Warren went on to tell the Vicksburg Daily News that he messaged Parker and the response was, “something like ‘…according to my attorneys’ advice, I’m not even supposed to be talking to you.” Then Warren added, “One more thing. He told me earlier this morning that everyone will be paid within 72 hours.”

The Vicksburg Daily News will stay with this story.