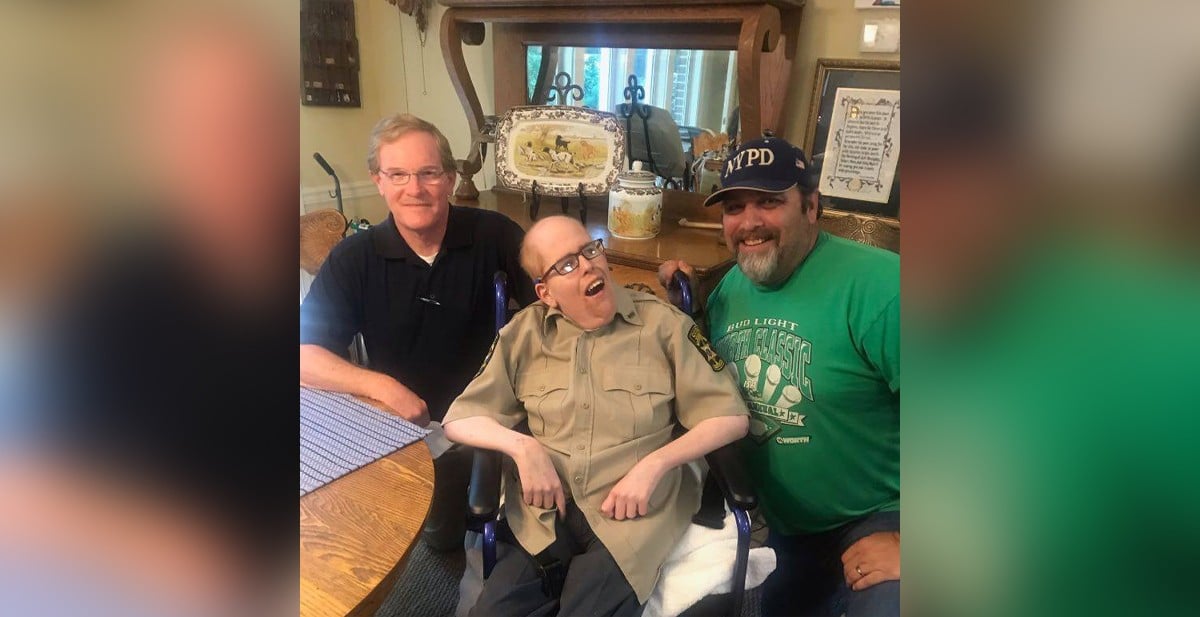 Will Conway never let his medical issues stop him from being a beacon of light everywhere he went. Because of Will, many will benefit for years to come. Conway died Friday, May 15, at the age of 32.

Some years back, Warren County Sheriff Martin Pace made Will an honorary deputy sheriff. Ford Emery, now retired from the Sheriff’s Office, often took Conway riding with him in his patrol vehicle. It was on these rides that the two bonded, something Emery says he will cherish forever.

“He was a great young man, always smiling. He always came to the gym with us, and in that environment, he was just one of the guys, he caused everyone around him strive to be a better person,” Emery said.

“If everybody in this world had his outlook on life, this world would be a better place. He will be missed in this town. I hope he knew how many people loved him,”

One of those people was Vicksburg restaurateur Will Hood.

“He was a dear friend,” he said. “The highlight of our year is our annual Christmas fundraiser for Jacob’s Ladder and Rainbow Farms. It’s because of Will that we agreed to host it some 16 years ago. Will always brought out the best in everyone. No matter how bad a day I was having, a visit from him could change that.”

It is because of Will Conway and a couple of other developmentally disabled people that Jacob’s Ladder Learning Center exists. Eustice and Kathy Conway joined with Cheryl Grogan, Steve Bryant and others to create a school so that these young people could gain a sense of normalcy in their day-to-day lives.

Edward Herring is president of Jacobs Ladder’s board. He remembers Conway for “that quirky smile,” Herring said. “He had heart of gold.

“The Mayor and Alderman made him the honorary Mayor posthumously on Monday. But he had been the Mayor for years, everywhere he went he knew everybody. People gravitated to him.”

“We have been looking to move Jacob’s Ladder for some time. The board is already discussing naming the new center in Will Conway’s honor and memory,” Herring added.

Will Conway’s legacy will live on as a wonderful blessing in our community and in the memories of all who were blessed to have known him.

George Wilson “Will” Conway passed away peacefully, May 15, 2020, surrounded by loved ones at home. He was 32 years old.

Will, a native of Vicksburg, attended Children’s House Montessori, the Vicksburg Early Education Center, Beechwood Elementary School and Jacobs Ladder Learning Center. He participated in Special Olympics, Buddy Basketball, Challenge League Baseball, Camp Silver Cloud, Vacation Bible School at First Baptist Church, and the Mardi Gras Parade. Will was a member of The Boys Night Out Club and the Monday Night Football Group at Beechwood Restaurant with Will Hood. He worked at McAlister’s Deli as a greeter and loved it. Will also enjoyed going to the YMCA and visiting with all his friends. He took great joy in therapeutic horseback riding with Leigh Ann Nosser, fishing with Greg Hayes and riding shotgun with Ford Emery. Will loved being with his family at Eagle Lake, listening to country music and keeping up with his Facebook friends.

Will was a member of the Church of Holy Trinity and First Presbyterian Church.

He was preceded in death by his paternal grandparents, Mr. and Mrs. Eustace Conway Jr., and his uncle, George Sherman Cronia Jr.

The family would like to thank everyone who helped Will throughout his lifetime, including Delta Fresenius Dialysis Group, staff of Medical Associates, staff of River Region, staff of Promise Hospital, Annette Scott, Tammy Hatchett, Donna Jones, Tashiba Hatchett as well as the board, staff and students of Jacobs Ladder Learning Center. We are humbled and grateful.

Thank you to Encompass Home Health and Hospice who provided such special care for our son.

In lieu of flowers, the family requests that memorial contributions be made in his memory to: Jacobs Ladder Learning Center, 1017 Harrison Street, Vicksburg, MS 39180.

Arrangements for the memorial services will be forthcoming.

The Vicksburg men who toured with Little Richard

Surprised I lived this long, but was beginning to think I’d never go! If you’re reading this, it’s because I’ve met my maker; read fast, as I have tomatoes to plant. The soil up here is cool and rich, and guess who came running when I was finally able to utter a word? Snowman! That boy is somethin’ else…still remembers the tricks we learned together. So many puppies here, at first I thought I went to Dog Heaven until I hugged my momma and she said my daddy is here (whew!), but still hiding from her. Found my twin, Ronnie, yesterday, he still looks like me, handsome devil (oops, probably a bad expression here). I’ve missed him! I’m on the hunt for the rest of my brothers, because I hear them taunting this little brother in the distance, sons o’ b*tches. To my loved ones on Earth, I want you to know I suffer no more. My two beautiful sisters, Jerlene and June, my little brother David, our love is thick, no matter the distance or the disagreement. Take care of each other, please. Mark, my only son, I am so very proud of you, I miss you being my hunting sidekick, my golfing partner, my fishing buddy, but thank you for being my caregiver when I was down. You’re a loyal son, I love you…and I’m sorry those Cowboys suck right now. Chelle….look up! I’m here and forever in your heart. Be encouraged, and know I’m whole, happy and busy again. All the things you wanted for me. You are my sunshine, I love you, take care of everyone. My grandkids…Josh, Colby, Ashlee, Mary Katherine, Allen Dale, and Cali-bug, and greats Maverick and Michael, I enjoyed making you laugh over the years and proud to be your pawpaw. Each of my grandkids, and greats, hold a special place in my heart. Y’all grow up strong and don’t be sissies, ya hear?  PS…just met my favorite gameshow host, Alex Trebek, “I’ll take Paradise for a thousand, please!”

Visitation will be Tuesday, Nov. 10, 2020 from 2 p.m. to 3 p.m. at Glenwood Funeral home with services in the chapel at 3 p.m. Burial will follow in Cedar Hill Cemetery.