Road names have always intrigued me. They are important for those who deliver the mail, for UPS drivers and census takers, if one is giving directions and for guys like me who don’t have GPS.

How did roads get their names? I was curious about the one on which I live—Campbell’s Swamp Road. Who were the Campbells? Who were those people who had both a road and land underwater named for them? I did a bit of research, found out who they were and when they bought the land, and even wrote a book, “Down Campbell’s Swamp Road,” a few years ago.

What about other roads in my community in south Warren County? Some names are obvious, such as Jeff Davis, named for the president. But there are others not so clear, such as Burnt House and Old Wooley.

Some have had name changes, they’ve often been rerouted, but others have remained the same.

Have you ever been down Fonsylvania Road, which connects Fisher’s Ferry with Hall s Ferry? In 1862, B.L.C. Wailes, the state geologist who also founded the Mississippi Historical Society and helped survey the boundary between Mississippi and Alabama, drove his buggy from his home on Fisher’s Ferry over to Asbury Methodist Church on Hall’s Ferry for services. He wrote that the road was a “circuitous, rough and hilly route.”

There’s Hankinson’s Ferry Road. The ferry was replaced by a bridge around 1900, and the bridge fell into the Big Black in the early 1980s. Today, it is simply Hankinson Road. Will Hankinson married into the Hyland family and ran the store at Yokena. His family were here in the early 1800s, and a Port Gibson newspaper in the 1820s advertised lots for sale “in the new town of Hankinson.” Few if any lots were sold, and the town never happened. Today’s there’s a fence across the road.

Often, roads bear family names such as Mallett, Muirhead, Friar, Ring (which used to be Hilderbrand), Monk and Glass. What must travelers think when they see the sign for Glass Road? Is it a strange pavement?

Then there’s Dudley Road, which was Ivanhoe Ferry until the Dudleys moved across the Big Black River from Utica and bought some land that I think was part of the old Sue Covington plantation. “Ivanhoe” was a very popular novel published in 1819 by Sir Walter Scott, and the road that bore the name was off Fisher’s Ferry and connected Warren County to Claiborne County near Rocky Springs. 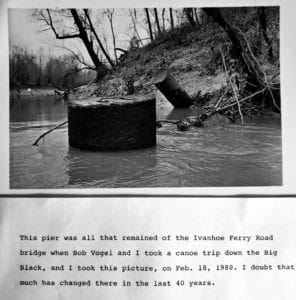 The Fishers, who operated the ferry over the Big Black River, were Hungarians, a sure ‘nuff novelty at that time in a community mostly of Scots and Irish and English. On the Warren County side of the river was a huge hunting horn, hanging from a post. A traveler would blow the horn and a member of the Fisher family would come down and ferry them across for a fee, a forerunner of toll roads and bridges.

After the ferry, a bridge was built. My great-grandmother’s brother, Jim Highlender, owned Sunny Mount plantation on the Claiborne County side. He was a wealthy man, and I was told by Aunt Malena, “He bought a supervisor and had a bridge built.”

In the late 1920s there was a log jam under the bridge, and the supervisors (I don’t know from which county) decided to dislodge the logs with dynamite. The plan worked, but they failed to take into consideration the fate of the bridge. Only a pier was left, and Daddy said he hoped it would always stand as a testimonial to the intelligence of the board of supervisors.

Hall’s Ferry was to have been Reagan’s Island Ferry, connecting Warren County with Hinds and Claiborne counties. A study was made by engineers to decide the best route to take, and a citizens committee agreed with them—it was unanimous that Reagan’s Island was the preferred route, but the supervisors took a different view. Sounds like another case of somebody buying a supervisor—or maybe a whole board.

Singing Hills is a pretty name, that of another road off Redbone Road. I don’t know where it came from, but it sounds like a real estate agent’s dream. It’s a pretty road with nice homes, but the name may have been conjured up just like Alice’s Yellow Brick Road in her Wonderland.

Dana Road is another named for a family. Why and how two young Dana brothers came to Warren County is a unique story. Their parents, William and Mary Bancroft Dana, owned a farm at Belpre on the Ohio River and were famous for the fine apples they grew. One day a stranger appeared at the door, wanting to make a purchase. He was on his way to New Orleans or thereabouts, and he had a whole flotilla of men with him. The man’s friendly manner and charisma intrigued the Dana boys, Charles and John, and they joined the man’s followers. Their adventure ended at Bruinsburg in Claiborne County, and the Dana boys stayed, settling in what is now Warren County. The man with the captivating personality they had followed? Oh, he was a former U.S. vice president, the one who killed Alexander Hamilton, the man whose picture is on the $10 bill. His name was Aaron Burr.

I thought Burnt House Road was the only one in the world, but I hear there’s another in Ohio. It’s pretty obvious how the local route got its name, but there is more to the story. I read the account in an old diary, and I can’t remember on which side of 1900 the house burned. It was on the old Watt’s place, Sylvan Hills, bordered by Fisher’s Ferry, Grange Hall and what became Burnt House. The Watts family moved here from New Hampshire before the War Between the States and bought the plantation. They had a family of several children, and the boys fought in the Confederate service. Legend and rumor (and the old diary) have it that one of the girls married. The couple built a home, insured it, and the husband set it afire for the money. I suspect that has happened before.

Old Woolly Ridge, a private road off Redbone Road, preserves a bit of folklore in the community. Old Wooley was a large shaggy beast with red eyes that glowed in the dark. He hung out at the bottom of Wolf Hill, about where Mary Jo Blackwell lives on Redbone. Old Woolly was there before the Late Unpleasantness began in 1861, for B.L.C. Wailes wrote about him or something strange in the area. Some say he was still around in the early 1950s. According to the late Mrs. Elnora Friar, he could outrun any horse or car or even someone as fleet footed as Mrs. Friar. She had seen Old Woolly and knew lots of stories about him, which kept her children in line. I’m pretty skeptical, but she just about convinced me that Old Woolly was real and may still be roaming his haunt on Wolf Hill.

There used to be Price Hill Road, but the 911 folks had the name changed to the west end of Campbell’s Swamp. The hill is still there as is the bayou at the bottom named for a Welshman, Llewllyn Price. Mr. Price was a Unionist but that didn’t keep the Yankees from stealing his hogs, slaughtering them and cooking them—and then they had the gall to invite him to help eat them.

There’s also a Wright Road where John B. and Cynthia Wells Wright lived on Allendale Plantation. There are still Wrights on the road and in the community. I was once trying to give directions and told the folks the Wright Road was the wrong road, that they should not have turned right onto Wright Road, that a right turn was a wrong turn. Soon all parties were totally confused. It was about as funny as Abbot and Costello’s slap-stick comedy routine of “Who’s on First?”

That really dates me—and you, too, if you remember that. 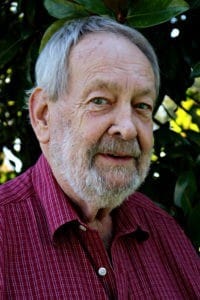