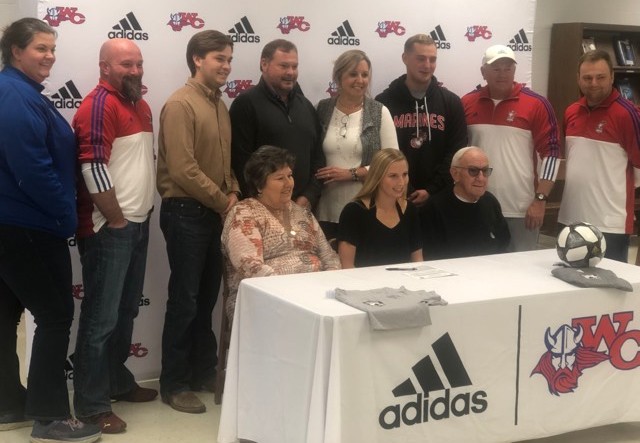 Maddie Watkins sat with her grandparents, Mr. and Mrs. Sonny Hale, at today's signing. Her brothers, Austin, third from left, and Blake, third from right, flank her father and mother, Craig and Belinda Watkins, They stood with her Warren Central soccer coaches.

Watkins chose Hinds over other junior colleges because of the environment and the love she has for the coaches.

It was also easy for Watkins to make her final decision because Hinds is close to Vicksburg, making it easy for her family to come to her games.

Watkins has been playing soccer since the age of 4. Her mom, Belinda Watkins, who played college soccer at the University of Southern Mississippi, coached her for the next six years. Her daughter learned most of her soccer skills from her mother.

Watkins began to play for Warren Central in the seventh grade. She begins her senior season this weekend against Raymond and Vicksburg high schools, starting Saturday at 9 a.m. at Warren Central.

Watkins has two older brothers. Austin Watkins is married to Morgan Joseph Watkins, and Blake Watkins, who is serving in the U.S. Marine Corps and is stationed in Camp Pendleton in California. Watkins is the youngest child of Craig and Belinda Watkins. She plans on pursuing a nursing degree at Mississippi University for Women after Hinds CC.