Mississippi will begin inoculating front-line health care workers Wednesday using the new Moderna vaccine. The Moderna vaccine is similar to the Pfizer vaccine; however, it does not require ultra-cold storage, making it easier to distribute to rural areas. Both vaccines require two shots three to four weeks apart.

Health care officials emphasize that Mississippians need to continue taking precautions to limit the spread of the virus, probably for several more months until the vaccines begin to lower rates of infection. Of particular importance right now is avoiding holiday parties and social gatherings with people outside of immediate family or household. That includes sporting events, in-person church services, weddings and funerals. In addition, wearing a mask in public, keeping 6 feet of social distance and practicing good hand hygiene continue to be essential.

For guidelines on celebrating the holidays safely, go to the MSDH website, where you will also find guidance for religious services during the holidays. The website also provides more information about the COVID-19 vaccines including answers to frequently asked questions.

Warren County reported a one-day record of new COVID-19 cases Wednesday with 57. The 14-day total of new cases is 402. The number of cases reported so far in December, 619, is more than July’s total of 521, with another eight days to go. Expect to see about 800 cases this month if the trend doesn’t change.

Tuesday, Gov. Tate Reeves added Warren County to his list of hot spot counties that now include all but four of Mississippi’s 82 counties — Claiborne, Issaquena, Sharkey and Tunica — three of which neighbor Warren. Because Vicksburg and Warren County are both already under mask mandates, the governor’s proclamation does little to change the restrictions already in place.

Tuesday also saw Mississippi’s and Warren County’s highest number of deaths reported in one day since the crises began: 79 in the state and five deaths in the county. The state is on track to see about 1,000 deaths in December alone making it the deadliest month for the virus in 2020.

“COVID is one of the leading causes of death in Mississippi,” said State Health Officer Dr. Thomas Dobbs during a news conference Tuesday. “Please be careful. You can’t necessarily avoid cancer. You can’t avoid heart attacks in the short term, but you can avoid COVID.”

Mississippi’s cumulative total of COVID-19 cases topped 200,000 Wednesday. The last time Mississippi reported fewer than 1,000 new cases in one day was Nov. 24. Fourteen of the first 23 days in December have seen more than 2,000 cases per day.

With more than 47,000 new cases reported so far in December, the state will see more than 63,000 cases by the end of the month if the current trend continues. Cases to date in December already obliterate the previous monthly high of around 33,000 set only last month and the July surge of 31,500 cases.

“Parties should not be happening at all,” Dobbs said Tuesday, adding, “Do not go. Do not let your kids go.”

The huge number of cases means a corresponding rise in the number of hospitalizations in the state. Hospitalizations have now surpassed the July high of around 1,250, and hospitals across Mississippi are reporting that no ICU beds are available for any seriously ill or injured person, not just COVID-19 patients.

Nationally, the cumulative cases in the U.S. have soared to more than 18.2 million, with some sources putting the figure as high as 18.7 million. Rates of infection, hospitalization and deaths continue to rise although the rate of new cases, especially, seems to be slowing.

The number of people who have died in the U.S. since the beginning of the crisis numbers about 323,002.

At least 3,239 people died of the virus Tuesday in the U.S., and at least 201,674 new cases were reported. As expected, the rate of deaths is now increasing faster after a surge in new cases. Deaths have increased 18% in the past two weeks, while cases have gone up about 4%. The number of people hospitalized across the nation is about 118,000.

California, Illinois, Pennsylvania and Texas all announced more than 1,000 deaths last week, while the Midwest and Mountain States continue to show improvement. The South is emerging as the nation’s most affected region at the moment. Tennessee is seeing more cases per capita than any other state, while Georgia, Arkansas and South Carolina all set weekly case records in the past seven days. Mississippi is among several states where new deaths are on the rise.

In Warren County, MSDH reported 57 new COVID-19 cases Wednesday — a record number cases in one day — and no new deaths. The cumulative number of cases in Warren County to date is 2,406, and the county’s death toll is 74. The seven-day average of new cases in the county 26.7 per day, more than five times higher than in early November when the average was about five cases per day.

Statewide, MSDH reported 2,634 new COVID-19 cases Wednesday, bringing the total cumulative confirmed cases in Mississippi to 200,325. The seven-day average of new cases is 2,097 per day, about 61% higher than the seven-day average a month ago, when the state’s numbers were already on the rise. The current averages far outstrip the numbers seen at the height of the last surge in July.

Deaths are a lagging indicator. During last summer’s surge, for example, July broke records for new cases. In August, deaths spiked. The current surge in Mississippi began in late October, and the state reported a record number of deaths in one day, 79, on Dec. 22. Before that, the highest number of one-day deaths in Mississippi was 67 reported Aug. 25. November and December case numbers have exceeded cases reported in July, and December’s death toll is on track to exceed August’s.

Of the 43 deaths MSDH reported Wednesday, 37 occurred between Oct. 30 and Dec. 22 in the following counties:

An additional six COVID-19 related deaths occurred between Dec. 4 and Dec. 17 and were identified from death certificate reports.

New cases and deaths were reported to MSDH as of 6 p.m. Tuesday, Dec. 22. MSDH usually reports statistics on the COVID-19 coronavirus each day based on the previous day’s testing and death reports.

The number of Mississippians hospitalized for the virus as of 6 p.m. Monday, Dec. 21, was 1,340. The number includes 1,267 with confirmed cases of COVID-19 and 73 people with suspected but unconfirmed cases. Of those with confirmed infections, 336 were critically ill and in intensive care units and 192 were on ventilators. 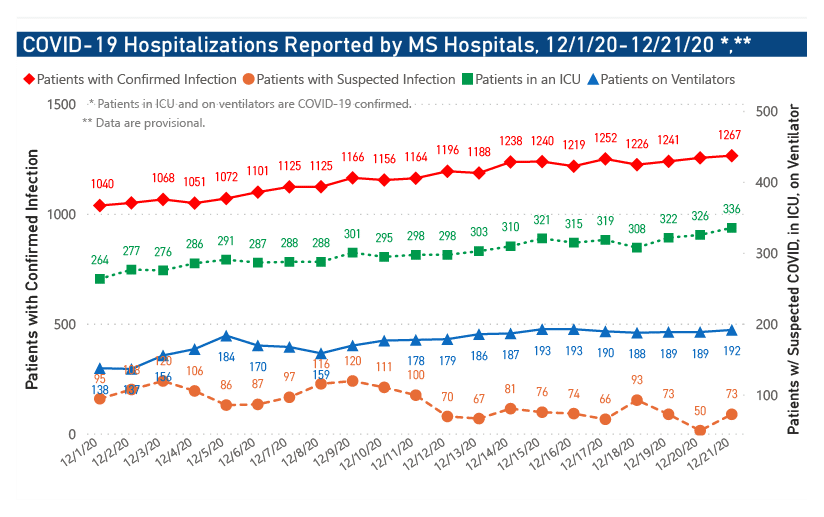 MSDH has estimated the number of people who can be presumed recovered from COVID-19 in Mississippi. That number is 154,669 through Sunday, Dec. 20. It represents about 77.2% of the cumulative 200,325 cases reported as of Wednesday, Dec. 23.

The total number of Mississippians tested for COVID-19 (PCR and antigen tests identifying current infections) as of Saturday, Dec. 19, is 1,669,558 or about 56.1% of the state’s 2.976 million residents. MSDH reports statewide test results once a week. Without daily updated numbers of tests, it is impossible to accurately calculate Mississippi’s positivity rate (positive results to tests, seven-day average); however, the estimated rate was 23.1% Tuesday, according to Johns Hopkins University. The national rate is 11.2%, and 5% or lower indicates adequate testing.