Tuesday, the Food and Drug Administration announced that it expects to give the go-ahead to the Moderna vaccine Friday, the second vaccine in the nation’s arsenal against COVID-19, increasing availability of vaccines from coast-to-coast.

Monday, Mississippi received enough doses of the Pfizer vaccine for 25,000 people. The first round of vaccines will go to health care workers on the front line of treating COVID-19 patients, with vaccinations expected to begin Tuesday and Wednesday.

On the 21st consecutive day of reporting more than 1,000 new cases per day, Mississippi reported 2,205 new cases Monday. Eight days of the first 15 days in December have seen more than 2,000 cases per day.

With more than 30,000 new cases reported so far in December, the state will see more than 60,000 cases by the end of the month if the current trend continues. The number obliterates previous monthly highs of around 34,000. State health officials expect cases to go even higher in January after the Christmas and New Year holidays.

The huge number of cases means a corresponding rise in the number of hospitalizations in the state. Hospitals across Mississippi are already reporting that no ICU beds are available for any seriously ill or injured person, not just COVID-19 patients. As of Tuesday, the Mississippi State Department of Health suspended elective surgeries statewide.

Nationally, the cumulative cases in the U.S. have soared to more than 16.5 million, and the rates of infection, hospitalization and deaths continue to rise. The number of people who have died in the U.S. since the beginning of the crisis numbers more than 300,000.

At least 1,648 people died of the virus Monday in the U.S. and at least 201,073 new cases were reported. As expected, the rate of deaths is increasing steeply after a surge in new cases. Deaths have increased 65% in the past two weeks, while cases have gone up about 31%. The number of people hospitalized across the nation now exceeds 110,500.

In Warren County, MSDH reported 25 new COVID-19 cases Tuesday and two new deaths, one of which was a resident in a long-term care facility. The cumulative number of cases in Warren County to date is 2,187, and the county’s death toll is 67. The seven-day average of new cases in the county has risen to 29.3 per day, nearly six times higher than in early November when the average was about five cases per day.

Statewide, MSDH reported 2,205 new COVID-19 cases Tuesday, bringing the total cumulative confirmed cases in Mississippi to 183,300. The seven-day average of new cases is 2,196 per day, about double the seven-day average a month ago, when the state’s numbers were already on the rise. The current averages far outstrip the numbers seen at the height of the last surge in July.

Of the 48 deaths MSDH reported Tuesday, 32 occurred between Dec. 8 and Dec. 14 in the following counties:

An additional 16 COVID-19 related deaths occurred between Nov. 25 and Dec. 10 and were identified from death certificate reports.

New cases and deaths were reported to MSDH as of 6 p.m. Monday, Dec. 14. MSDH usually reports statistics on the COVID-19 coronavirus each day based on the previous day’s testing and death reports.

The number of Mississippians hospitalized for the virus as of 6 p.m. Sunday, Dec. 13, was 1,255. The number includes 1,188 with confirmed cases of COVID-19 and 67 people with suspected but unconfirmed cases. Of those with confirmed infections, 303 were critically ill and in intensive care units and 186 were on ventilators. 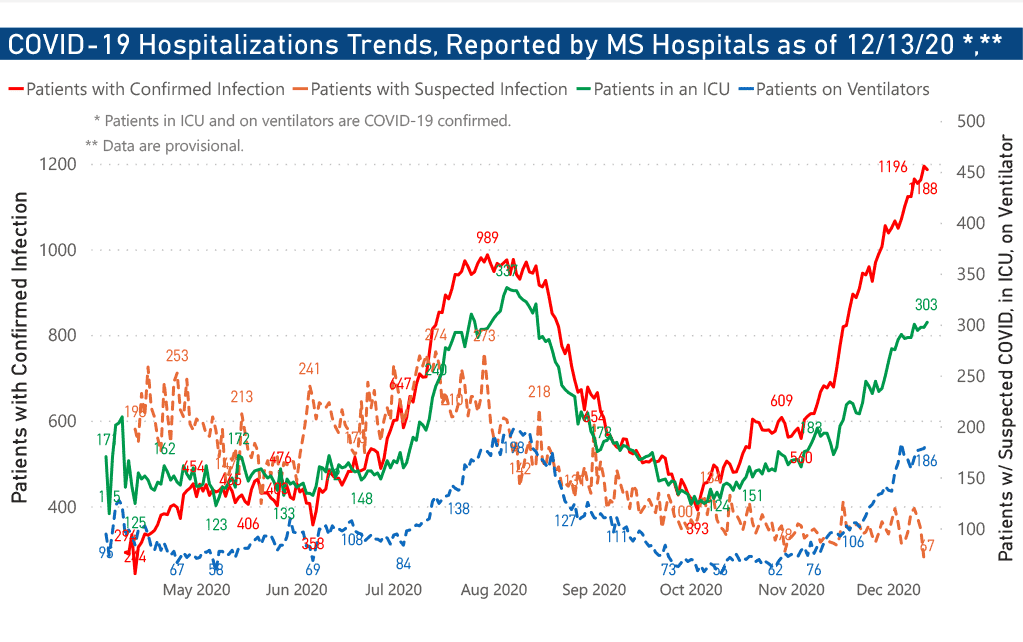 MSDH has estimated the number of people who can be presumed recovered from COVID-19 in Mississippi. That number is 148,466 through Sunday, Dec. 13. It represents about 81% of the cumulative 183,300 cases reported as of Tuesday, Dec. 15.

The number of cases in Warren County three weeks ago, Tuesday, Nov. 24, was 1,722, therefore the estimated number of people presumed recovered in the county is 1,655, or about 75.7% of the 2,187 cumulative cases reported as of Tuesday, Dec. 15. The county has an estimated 465 active cases.

The total number of Mississippians tested for COVID-19 (PCR and antigen tests identifying current infections) as of Saturday, Dec. 12, is 1,550,198 or about 52.1% of the state’s 2.976 million residents. MSDH reports statewide test results once a week. Without daily updated numbers of tests, it is impossible to accurately calculate Mississippi’s positivity rate (positive results to tests, seven-day average); however, the estimated rate was 21.8% Monday, according to Johns Hopkins University. The national rate is 11.4%, and 5% or lower indicates adequate testing.

Will you get vaccinated? Let us know

One person in custody in case of toddler abandoned at Goodwill