Friday brought news of another COVID-19 death in Warren County, the 12th this month. Statewide, the seven-day average of new cases continues to decline, while hospitalizations remain relatively flat.

In Warren County, the Mississippi State Department of Health reported 15 new COVID-19 cases Friday and one death from a July death certificate report. The cumulative number of cases in the county to date is 1,166, and the county’s death toll is 37.

MSDH reported Friday that 32 Mississippians died of COVID-19 statewide, bringing the total number of deaths in the state to 2,043. The state’s rate of deaths to confirmed cases is about 2.9%, a rate that had been holding steady for at least two weeks but has now risen slightly. 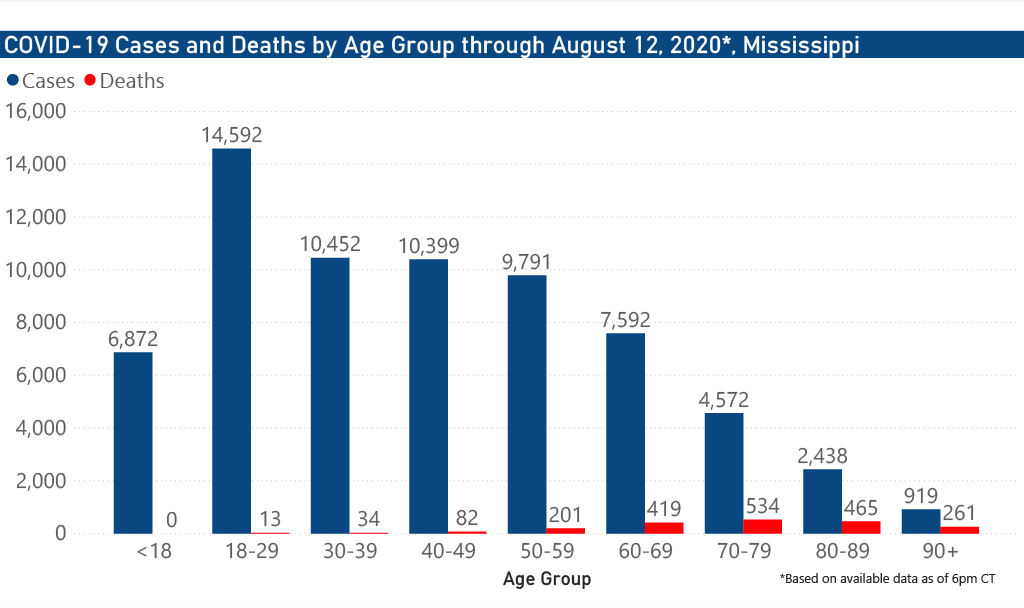 Deaths and new cases were reported as of 6 p.m. Thursday, Aug. 13. MSDH usually reports new statistics on the COVID-19 coronavirus each day based on the previous day’s testing and death reports.

The primary metric concerning state health officials are the numbers of people hospitalized, and that number has been steadily rising with new cases. On June 6, the number of Mississippians hospitalized with confirmed cases of COVID-19 was at a low of 358. Since then, hospitalizations have nearly tripled. Three weeks ago, health officials began warning repeatedly that some hospitals were running out of ICU beds. That warning has become more urgent as the number of critical cases continues to rise.

The number of Mississippians hospitalized for the virus as of 6 p.m. Wednesday, Aug. 12, is 1,136. The number includes 949 with confirmed cases of COVID-19 and 187 people with suspected but unconfirmed cases. Of those with confirmed infections, 318 were critically ill and in intensive care units and 195 were on ventilators. 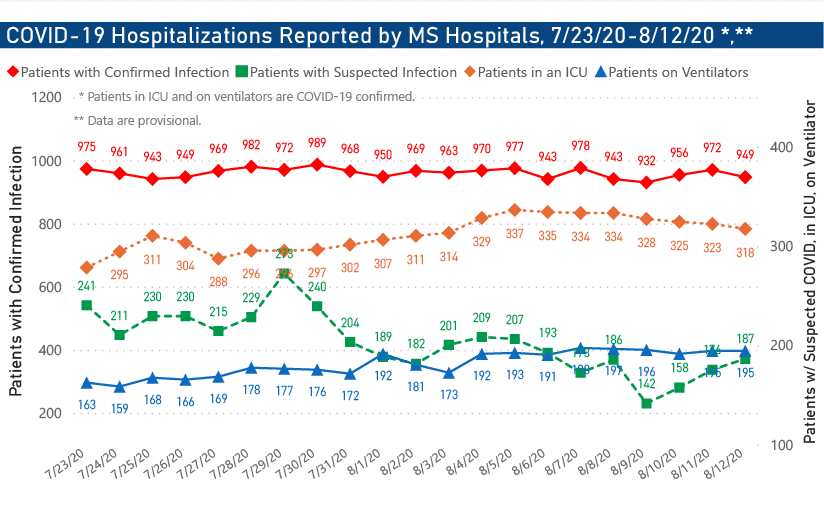 MSDH has estimated the number of people who can be presumed recovered from COVID-19 in Mississippi. That number is 49,836 through Sunday, Aug. 9. This figure is updated weekly. It represents about 70.3% of the cumulative 70,930 cases reported as of Friday, Aug. 14.

The number of cases in Warren County three weeks ago, Friday, July 24, was 825, therefore the estimated number of people presumed recovered in the county is 788, or about 67.6% of the 1,166 cumulative cases reported Friday, Aug. 14. The county has an estimated 341 active cases.

The total number of Mississippians tested for COVID-19 (PCR tests) as of Wednesday, Aug. 12, is 509,380 or about 17.1% of the state’s 2.976 million residents. The positivity rate (positive results to tests, seven-day average) is about 21.6%, according to Johns Hopkins University, indicating Mississippi is not testing nearly enough, and results are probably an undercount of actual infections. The national rate is currently 7.2%, and a rate of 5% or less indicates adequate testing. Mississippi’s positivity rate has been the highest or among the highest in the nation for more than a week.

In Warren County as of 6 p.m. Thursday, Aug. 6, MSDH reported that three long-term facilities were under investigation for active COVID-19 outbreaks:

A total of 18 deaths in the county were residents of LTC facilities.