Hospitalizations for COVID-19 remain in record territory Thursday as Mississippi sees another big jump in reported cases and deaths.

The Mississippi State Department of Health reports 13 new COVID-19 cases in Warren County Thursday, bringing the cumulative number of cases in the county to 553.

No new deaths were reported Thursday in the county, leaving the death toll at 20.

MSDH reports that 16 Mississippians died of COVID-19 statewide Thursday, bringing the total number of deaths in the state to 1,204. Nearly half of the state’s deaths were people in long-term care facilities. The state’s mortality rate of deaths to confirmed cases is about 3.6%, a rate that has been steady recently.

The numbers of deaths can lag new cases by as long as two weeks or more, which may be one reason deaths in the state have not risen dramatically until Tuesday when 44 deaths were reported. In addition, most new cases are seen in younger people recently, and they are more likely to survive the virus than those 65 and older. By far, the largest age group reporting cases in Mississippi are young people from 18 to 29 years old.

COVID-19 deaths are reported in the following counties Thursday:

Deaths and new cases were reported as of 6 p.m. Wednesday, July 8. MSDH usually reports new statistics on the COVID-19 coronavirus each day based on the previous day’s testing and death reports.

MSDH has estimated the number of people who can be presumed recovered from COVID-19 in Mississippi. That number is 22,167 through Sunday, July 5. This figure is updated weekly. It represents about 66% of the cumulative 33,591 cases reported as of Thursday, July 9.

The number of cases in Warren County June 18 was 290, therefore the estimated number of people presumed recovered in the county July 9 is 270, or about 48.8% of the 553 cumulative cases reported Thursday, July 9. The county has an estimated 263 active cases.

(MSDH did not report county-level COVID-19 data from June 18 to June 21. On June 22, the agency reported 51 new cases for five days. The Vicksburg Daily News is adding 10 cases for the next four days and 11 cases for June 22 to calculate estimates for presumed recovered and active cases for this period.)

The primary metric concerning state health officials are the numbers of people hospitalized, and that number has been steadily rising with new cases. This week, health officials warned repeatedly that some hospitals were running out of ICU beds.

Mississippians hospitalized for the virus as of 6 p.m. Wednesday, July 8, is 941, including 686 with confirmed cases of COVID-19 and 255 people with suspected but unconfirmed cases. Of those with confirmed infections, 187 were critically ill and in intensive care units, and 105 were on ventilators. 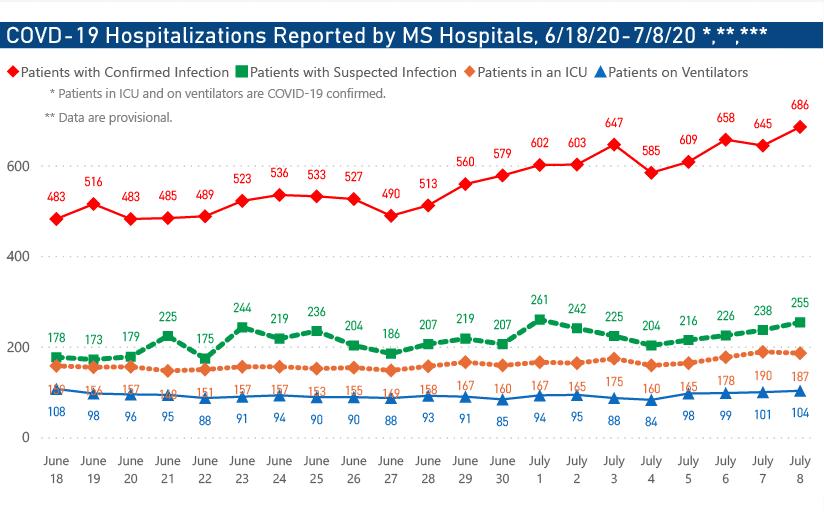