Warren County officials met Friday to map out a plan of action for waterlogged area roads. (photo by David Day)

With public safety as their No. 1 concern, Warren County officials are asking for the public’s help in keeping up with problems on county and Vicksburg roads due to the recent heavy rains.

“If you see a danger, or you see a wash, please let your supervisor know” said District 1 Supervisor Ed Herring. Once a problem is known, the county can make plans to get it fixed. 601-631-8800 is the number to call if you see a problem. You can call 911 if you believe the situation to be dangerous and in need of immediate attention.

In a special meeting Friday afternoon, the Warren County Board of Supervisors met with John Elfer, director of the Warren County Emergency Agency, County Engineer Keith O’Keefe, Sheriff Martin Pace and County Road Manager Larry Flowers to stay abreast of road problems and draft a plan of action to ensure the public’s safety on area roads.

“Mother Nature has dealt us a good one here,” Herring said. With nearly non-stop rain, trying to fix the roads between the storms is a real challenge.

“We haven’t had enough decent weather to begin repairs,” Flowers said during the meeting. Elfer added that repairs to the section of U.S. Highway 80 that collapsed earlier this week could take up to six to eight months.

In just the last week, Warren County has seen multiple mudslides, trees falling onto roadways and road damage caused by flood conditions. The ground is saturated, and heavy traffic in many areas has caused excessive roadbed deterioration in the soft, shifting soil. With more rain in the forecast, it’s likely more road issues will surface. 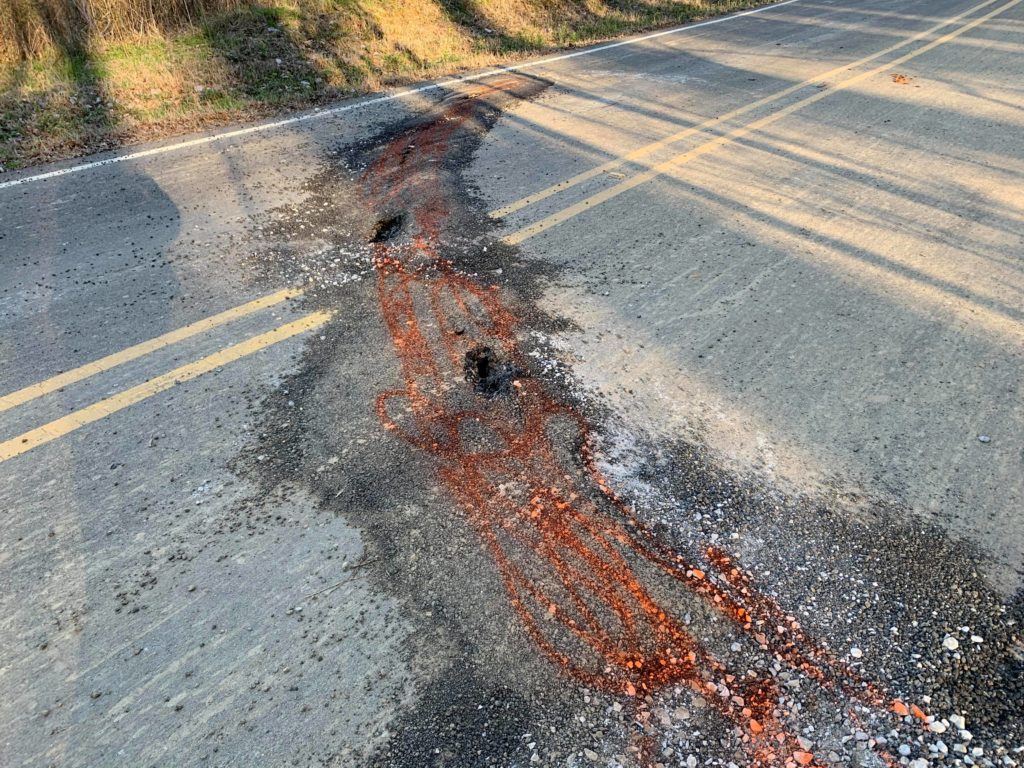 A section of Redwood road (photos by Thomas Parker)

With 2 or 3 more inches of rain expected next week the already soaked roadways are especially susceptible to heavy equipment and trucks, such as logging or gravel trucks.

“With the roads as saturated as they are and the mud on the roads, there is some grave concern with these heavy vehicles … causing more and more damage to the already failing pavement,” Herring said.

Sheriff Pace suggested that in extreme cases the supervisors may want to consider cutting off log and gravel trucks from using the roads until the emergency has passed citing that the alternate routes were no better. No decision on his suggestion was made.

More than a dozen roads have been identified as problematic, with several already blocked off.

Redwood and Oak Ridge roads are at the top of the list of damaged roads, with severe mudslides, shoulder washouts, and asphalt giving way and cracking. “We also have some undermining to the roadway itself,” Herring said.

County officials closed a section of Redwood Road from the 1500 block to the 1900 block Friday afternoon as unsafe.

O’Keefe said the county road crews do a great job and can make a lot of the necessary repairs, some repairs may need to be bid out. “Some of these roads are going to require structural solutions,” O’Keefe said, “not just some backfill and asphalt.”

The county engineer said he was currently focused on immediate threats and keeping up with damage assessments, and suggested the county put together a road-assessment task force.

Another area of great concern is Eagle Lake Shore Road, which was heavily impacted by the floods last year. Currently, water is cascading over the roadway.

“We will provide materials to assist at Eagle Lake,” Elfer said. “What we’ve learned from last year is we have to ask if the work is going to be worth the effort.”

Mississippi Highway 465 will most likely close at some point, he added.

If you see a dangerous roadway please immediately call 601-631-8800. If you believe the danger is serious enough call 911.

David Day contributed to this report.