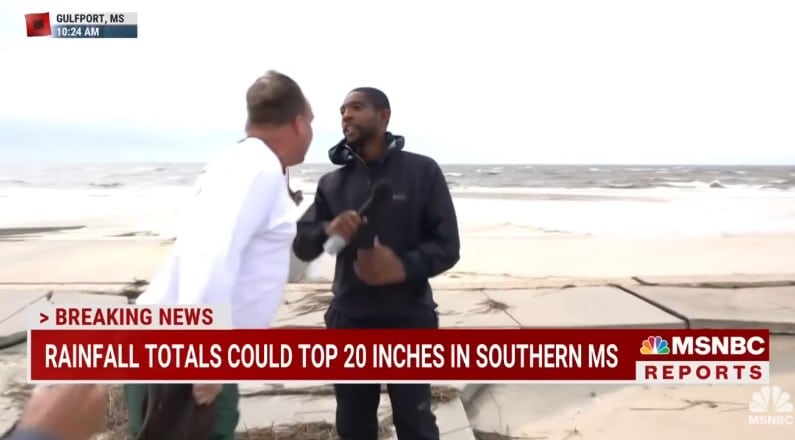 A journalist with MSNBC was accosted during a live report from Gulfport. (Photo via screengrab of MSNBC live report)

An arrest warrant has been issued after an MSNBC journalist, Shaquille Brewster, was accosted on Monday during a live report of Hurricane Ida at the Mississippi Gulf Coast.

Benjamin Eugene Dagley of Wooster, Ohio is being charged with two counts of simple assault, one count of disturbing the peace, and one count of violation of emergency curfew, WLBT reports.

Dagley is no longer in the area and is believed to be in a white 2016 Ford F150 with license plate number PJR1745. He is currently on probation in Ohio for similar charges. Restriction of travel was one condition of his probation.

On Monday, Dagley approached Brewster during a live report in Gulfport. Dagley was seen on camera exiting his vehicle and approaching the journalist screaming about “accuracy”. Brewster attempted to finish his report and had the camera pan away from Dagly. Dagly can be heard off camera during this time. After kicking back the report to the newsroom anchor, Dagly can be seen approaching Brewster on camera before the live feed ended.

View the incident below: