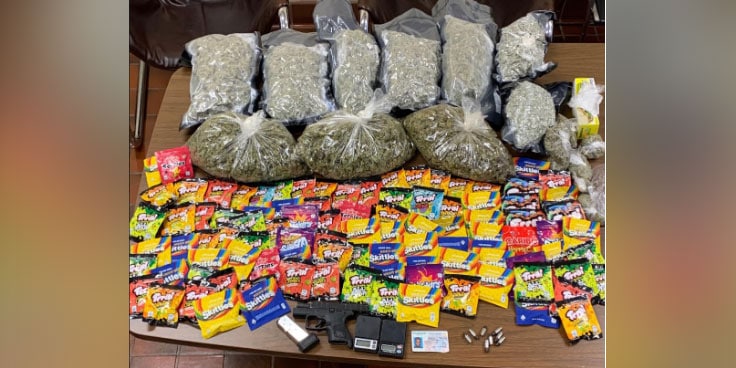 Shortly before 11:30 a.m. Sunday, Nov. 1, Vicksburg police attempted to stop a red Chevrolet Impala driving recklessly near the intersection of Lane Street and Military Avenue. The driver, Christopher Galloway, 24, of Vicksburg, refused to stop and led officers on a chase from there to Interstate 20 eastbound in front of Tractor Supply. When his attempt to jump from the interstate onto South Frontage Road failed, and his car was disabled, Galloway jumped from the vehicle carrying a backpack. The brief foot pursuit ended when he was apprehended behind the commercial building on North Frontage Road beside the Wisconsin Avenue overpass.

The backpack Galloway carried had three gallon-sized baggies of high-grade marijuana, and seven identical bags were found in the trunk of his car, along with some smaller bags of marijuana. Also seized were 100 bags of edible marijuana candy, two digital scales and a Beretta 9-mm handgun. The total weight of the marijuana is eleven pounds, with a street value of $33,000 for the bagged drugs and $15,000 for the candy.

Galloway was arrested on charges of trafficking and felony eluding, in addition to misdemeanor warrants already on file. He will appear in Vicksburg Municipal Court Monday, Nov. 2.