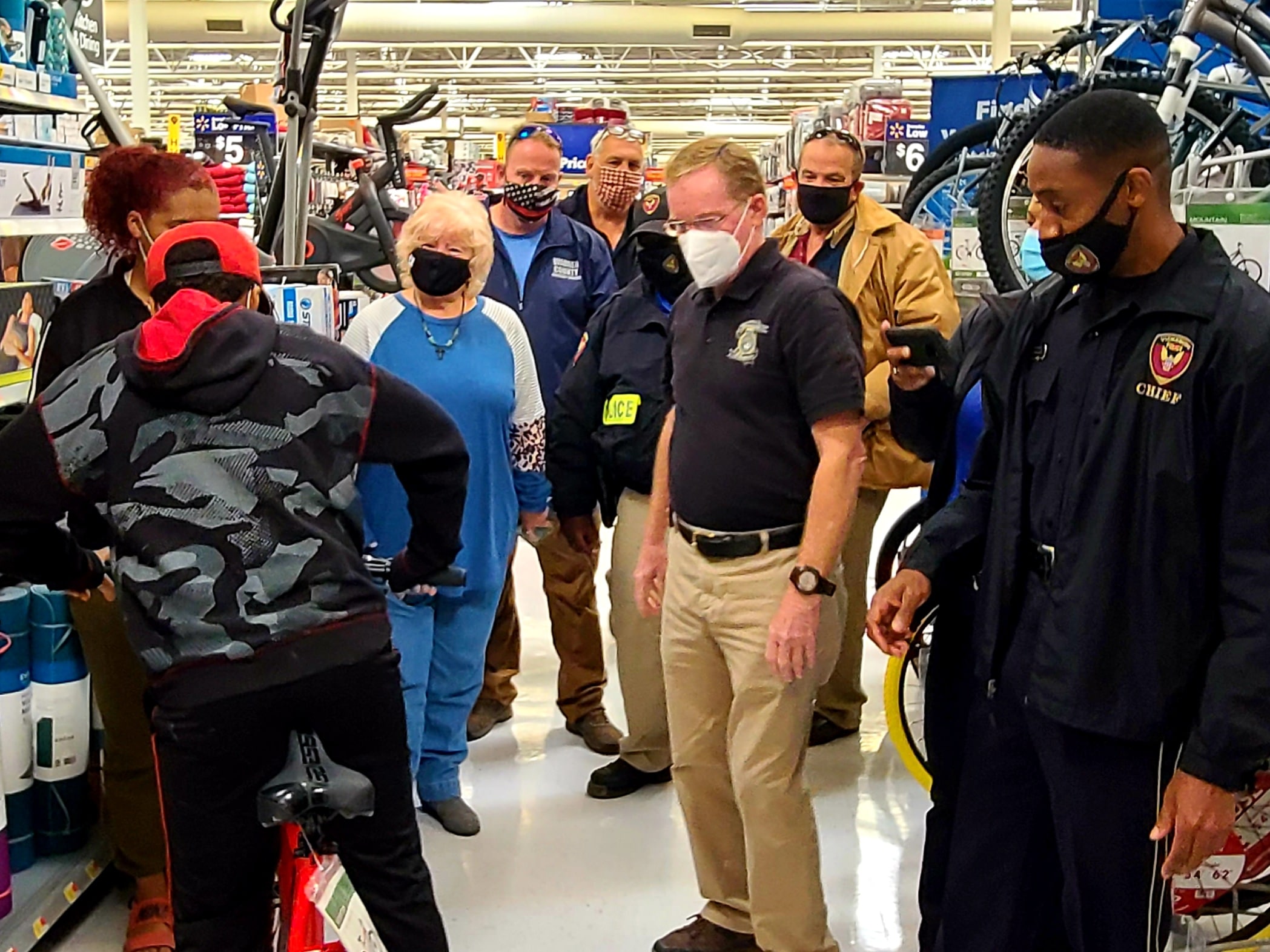 It seems the more things change, the more they stay the same. Charles Dickens wrote those words in 1859 and they seem to describe our modern times perfectly.

With grievous crimes reported almost every day, we can surely see the worst of times. Young men being gunned down before they reach adulthood all around us, a pandemic that is killing our family and neighbors while causing social and political drama all over the planet — we feel the worst of times.

Then something happens to remind us that it is also the best of times.

Kofi Louis, 13, had his bike stolen by a gun wielding robber Monday night. Kofi would probably had given him the bike if he had asked. He has already given away several bikes to his friends.

“He would find some bike parts in the trash and drag them home,” said his big sister Alicia Louis. Once he had enough parts assembled, he would come up with a bike, one he would proudly ride around the neighborhood. When he got up enough parts for another bike he would give one of them away to a friend who didn’t have a bike.

“He does it all the time,” Alicia added. “We got on to him for bringing all that bike trash home, but he kept on doing it.”

Alicia and Kofi live with their dad in an older part of town. 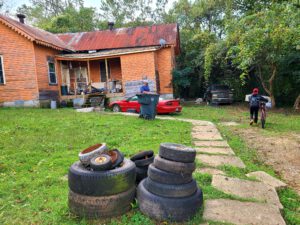 The Louis home where Chris Gilmer has installed new locks and Kofi Louis walks his new bike into the yard. (photo by David Day)

When the story of Kofi’s bike being stolen was reported there was an immediate outcry from the community. Some folks damned the police, some blamed a lawless society, many echoed the negativity that permeates the internet while others threatened mob justice for the criminal.

But a few people thought the focus should be on getting Kofi a new bike. Linda Shows started it all with her comment on the Vicksburg Daily News’ Facebook page: “Can some of us get together and get this child another bike?”

The response was strong and immediate.

“I will help,” said Stormy Deere.

“I don’t live in Vicksburg but would gladly contribute!” wrote Roberta Hefley.

“I couldn’t keep up with all the names of people who wanted to donate!” said an exhilarated Shows.

Kofi’s sister Alicia Louis organized a GoFundMe account to make sure her little brother got a new bike.

“I didn’t ask for much,” she said. “I just wanted to make sure he got a bike. He helps everyone. I wanted to help him.”

Warren County Fire Coordinator Jerry Briggs read the story and sent a private message to the publisher of the Vicksburg Daily News that he would pay for a new bike for Kofi.

“He can go pick it out,” he wrote. “I will buy the replacement.”

By the next morning Thomas Parker with the Vicksburg Daily News got involved and suddenly, everyone from Vicksburg Police Chief Milton Moore to Warren County Sheriff Martin Pace wanted to help Kofi Louis. The whole group descended on Kofi and Alicia’s house Thursday. Joining the group was locksmith Chris Gilmer of Vicksburg Locksmith Company.

A police escort to Walmart was followed by an intimidating group of city and county bigwigs including all 6 feet and who knows what of Reed Birdsong, Jerry “Fire Boss” Briggs, Tommy Parker, Linda Shows, Danielle Williams, traffic Patrolman Michael Battle and assembled media walking through Walmart like the Champions of the World (if it was a movie they’d be walking in slow motion) to the bike section.

It was a sight to see.

Like the Champions of the World, assembled officials escort Kofi Louis into Walmart to claim his bicycle. It should be seen in slow motion. (photo by David Day)

While this group of community leaders were slow-mo-ing through Walmart, Chris Gilmer was at the Louis residence installing new, high-dollar and high-security locks on their door. Gilmer showed up on a moment’s notice and refused payment from anyone for the locks. His locks and service probably cost more than the bicycle and accoutrements, but that is another story.

When we first arrived at Kofi’s house, he barely spoke and barely looked up to make eye contact. Now, at Walmart with his massive security team he was like a kid — well, like a kid in a bicycle shop. He was all eyes when he walked right over to the bike he wanted. It was a nice bike but not very fancy, not very expensive.

“Are you sure?” Chief Moore asked. “Have you seen the ones over here?”

Over here were the really nice bikes, the ones everyone wants including the chief. “I like these,” he said. “I’ll need one of these.”

Kofi said they are too expensive.

“You can have any bike you want!” Moore, Shows, Parker, Williams and Briggs all said it almost simultaneously.

Kofi looked around and slowly walked over to the really nice bikes like he was in a dream — maybe he was. He went straight to a fire-engine red Genesis brand bicycle that was a sure enough looker. Chief Moore and Sheriff Pace pulled the bike out of the rack and stood it on the floor. It is a beaut — every kid’s perfect bike.

It was now Kofi’s bike. 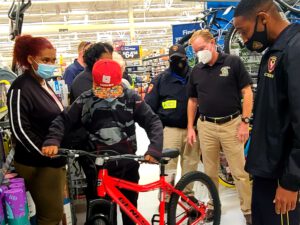 Big sister Alicia, Kofi, Michael Battle, Pace and Moore watched as Kofi got ready to mount the bike for the first time. He pushed it around. He got on it. Sheriff Pace adjusted the seat. Everyone seemed settled that it was the right bike for Kofi.

Pace encouraged Kofi to get a helmet and in a confident 13-year-old fashion, Kofi told the Sheriff that he “didn’t need no helmet.” Alicia suggested they go look, anyway.

Other folks shopping at Walmart were looking on while trying not to be too obvious. The group made quite a stir in the bicycle section of Walmart, and store Manager Angela Shelby came over to see what was going on. When she heard the story she immediately told the group that Walmart was paying for everything. She didn’t hesitate even a little.

That is a good community partner.

And this is Vicksburg, too. We have a crime problem. There are bad people doing bad things. We have a culture where a hint of disrespect can escalate to a shooting. We have legitimate concerns and issues to address in our community. — It is the worst of times.

We also have endless supply of good people who don’t even blink when it comes to helping others.

Jerry Briggs and Reed Birdsong raced to Vicksburg from Jackson to make sure Kofi got his bike and that Kofi knew those two giants of good men had his back. Chief Milton Moore and Danielle Williams rolled out the red carpet for Kofi and Alicia. Sheriff Martin Pace, as he always does, was there to comfort and assist.

Kofi didn’t really know who the sheriff is or what he does, but he knew that man would help him install batteries in his light, and he now has a number to call if he needs anything.

Michael Battle was the first person on scene today and has vowed to get the person that stole Kofi’s bike. Battle also escorted Kofi, police lights on, to Walmart.

Angela Shelby immediately took charge and let everyone know Walmart was here to help. Percy Wright and Cora Collins with Walmart made sure Kofi got a good quality lock for his bike and that nice helmet. You could feel the love from them.

Thomas Parker and Linda Shows got this ball rolling.

Vicksburg, we’re not perfect, and we need to fix some things, but right now, in this moment, isn’t it also the best of times?