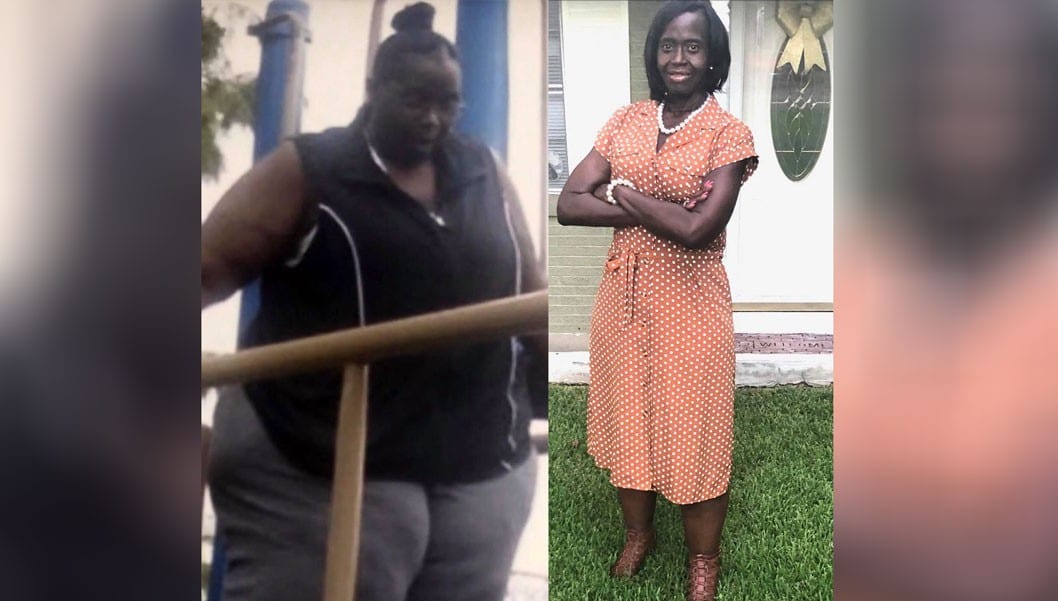 Denise Cooper before and after her weight loss transformation (photos courtesy of Denise Cooper).

Vicksburg resident Denise Cooper accomplished a goal of losing 241 pounds and has saved her own life.

In 2014, Cooper was struggling with the effects of obesity and was scheduled to have weight loss surgery. She soon changed her mind after her dietitian helped her lose over 30 pounds before the procedure.

”My dietitian explained to me what I needed to do to lose the weight which was by walking and eating right, Cooper said.

Cooper’s bad habits started at the age of 14 when she found her mother deceased.

“I was afraid to go to sleep after my mom’s death, so I began to eat a lot of sweets so that I would be able to stay up longer,” she said.

Fried foods and sugary snacks is what put Cooper at 440 pounds before her lifestyle change.

“I was afraid to face my own fears so I used food as a stress reliever, and so I would just eat all the time,” Cooper said.

After meeting Alexus Stirgus in 2014, Cooper began walking more frequently, and Stirgus trained her a few times a week. Stirgus continues to work with Cooper today even after she has completed one of the biggest achievements in her life.

Its been six years now since Cooper began exercising, and she continues to focus on maintaining her weight at 190 pounds.

“I’ve fallen in love with working out, and I’m now watching my weight because I just want to be healthy,” Cooper said.

Before the amazing weight loss, Cooper was on a high dose of blood pressure medication but is now free of that due to her outstanding progress.

“I feel 110% better since I’ve lost the weight, and I thank everyone who was there for me during the process,” Cooper said.

She hopes individuals who suffer from obesity are inspired by her story and begin a path of a healthier lifestyle.

“I want people to know that they should identify the problem of why they are eating and just trust God for the outcome,” she said.

Cooper thanked her family especially her children for sticking with her, along with the YMCA wellness director Bonnie Henry who introduced her to many weight loss and healthy eating classes at the Vicksburg YMCA.

“My children always make sure that I have exercise  equipment, and I remember my son teaching me how to jump rope,” she said.

Cooper is satisfied with her achievements but is also aware that living healthy is a lifetime goal that she is willing to stick to in order to live the way she knows is destined for her.

Those who keep us safe: Eric Paymon