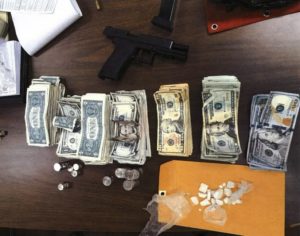 As a result of an on-going narcotics investigation, officers with the Narcotics Enforcement Team arrested Appiph Perkins, 37, of Vicksburg. At the time of his arrest, Perkins was in possession of approximately one ounce of crack cocaine, a stolen 9 mm handgun and $3,365 in cash.

Perkins was out on bond for previous charges of aggravated assault and robbery.

He appeared in Vicksburg Municipal Court on Friday, May 1, before Judge Angela Carpenter on charges of sale of cocaine, possession of cocaine with intent to distribute, possession of a stolen firearm and possession of a firearm by a convicted felon. She set his bond at $195,000 and bound him over to the Warren County grand jury

At 11:31 p.m., police officers made a traffic stop on Clay Street for curfew violation. A search of the vehicle revealed a felony amount of marijuana. The officers arrested Hewitt Mitchell, 20, of Vicksburg, on one count of felony possession of marijuana.

Mitchell also appeared before Judge Carpenter in Vicksburg Municipal Court in Friday. She set his bond at $40,000 and bound him over to the Warren County grand jury.

In other reported incidents for Thursday:

At 12:07 p.m., officers responded to a residence in the 2500 block of Confederate Avenue about a theft. The victim reported someone stole his 3-month-old Pit Bull valued at $350.

At 8:48 p.m., officers responded to the 1300 block of Chambers Street about an auto burglary. The complainant stated someone entered a Honda Accord and stole a purse containing a social security card, a driver’s license and a debit card. The vehicle had been left unlocked.