Vicksburg Police Department employee Nichelle Smith officially retired Thursday after 29 and a half years of service with the department.

A small ceremony was held for Smith at the courthouse Thursday morning where Mayor George Flaggs Jr. and Police Chief Milton Moore were among those who commended Smith.

“Nichelle has always been an easy, kind and hard worker,” Moore said. 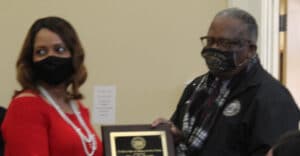 Mayor George Flaggs Jr. was on hand to commend Smith for her years of service. (photo by Keith Phillips)

Smith, a purchasing and supply specialist, began working for the VPD in 1991, and since then, she has worked with various police chiefs ,over a near 30 year career. During her time with the VPD, Smith worked heavily with the City of Vicksburg Street Ball program in the summertime that helped keep youth off the streets.

The City of Vicksburg is in debt to Smith for her service to the community.