If you aren’t familiar with the name TJ Taylor it is probably because he truly tries to fly under the radar. In spite of his low profile, he may be one of the most influential young people currently in Mississippi political circles.

Taylor serves as policy advisor and chief counsel to Mississippi House Speaker Phillip Gunn. In this role, he is on the ground floor of decisions that will affect the state for decades to come.

The 32-year-old Vicksburg native seems to relish the opportunity, saying “it gives me the chance to travel the state and hear the real concerns of the people.”

Taylor grew up in Vicksburg attending school in the Vicksburg Warren School District before his parents moved to Utica, completing his education at Raymond High School. His father, Arnold, retired from the Corps of Engineers; his mother, Cynthia, retired from the postal service. Taylor is the youngest of four children and credits his parents with his love of politics and debate adding, “we were encouraged to discuss current events.”

Taylor moved on to the University of Southern Mississippi where he earned his political science degree in 2010. From there he entered the law program at Mississippi College. In the summer of 2013, he was afforded the opportunity to intern in Speaker Gunn’s office.

Following graduation in 2014,Taylor worked at a public policy think tank in Jackson for a year before returning to the Speaker’s office in 2015 and ascending to his current role.

Taylor was recently recognized as one of the top 50 influential leaders in the state. He served as Gunn’s appointee on the state flag commission. It was Taylor’s idea to fly the five finalists’ flags before narrowing the field to the final choice that will be voted on November 3. 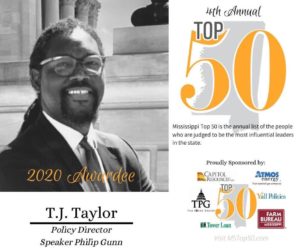 When asked what it is like working for the first Republican Speaker of the Mississippi House, Taylor said, “It’s a really cool experience. Phillip Gunn is a man of integrity who is not afraid to make an unpopular decision.” He added that “the flag issue is one of the highlights of this experience but being involved with him on a daily basis gives me a unique insight on how committed he is to the state of Mississippi.”

Taylor is married to a former law school classmate, Colorado native Brittany Taylor, who practices as an associate attorney with Stephens Millirons P.C. They reside in Madison and have two sons.

DOTD encourages travelers to use caution on roadways after Hurricane Delta