Longtime wrestling promoter Gil Culkin has published a book, “The Mississippi Wrestling Territory: The Untold Story.” The book chronicles Culkin’s early years as the son of a popular wrestler who later became a promoter and political figure in Warren County.

Gil Culkin became a partner in his father’s promotional business in 1974. Gil and George Culkin were the Mississippi connection for legendary Oklahoma promoters Leroy McGuirk and Cowboy Bill Watts. In the late ’70s the Culkins made the decision to break away and the war was on. For two years the Culkins brought wrestling to most of Mississippi. 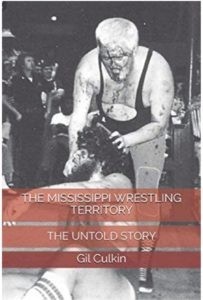 “The Mississippi Wrestling Territory: The Untold Story” by Gil Culkin.

The book details how some wrestlers who went on to be huge names in the industry got their first opportunities in Mississippi, including James “Sugarbear” Harris (who later changed his ring name to Kamala), the Fabulous Freebirds (Michael Hayes and Terry Gordy), and Percy Pringle, who gained his fame as the WWE’s Paul Bearer.

Culkin tells several laugh-out-loud stories about incidents involving himself and several incidents that the wrestlers caused.

The book talks about the “attractions in wrestling” such as Andre the Giant, The McGuire Twins, midgets, women and more.

As the Culkin’s rejoined Mid-South Wrestling and settled their differences with Bill Watts, they enjoyed several successful years. Culkin goes into detail about how his father felt about the legendary Junk Yard Dog who would often talk about going to Mississippi and seeing George C. Culkin in his television interviews.

The book is a candid look at the inside workings of a tremendous part of southern wrestling history, which was a major part of many childhoods. Order a copy and judge for yourself.

Listen to the interview with Gil Culkin