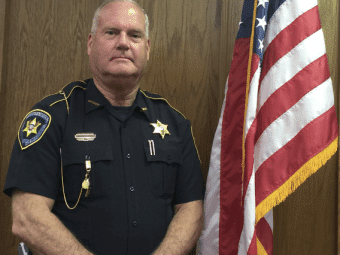 Randy Johnson began his second term as sheriff of Jasper County this past Monday, Jan. 6.

The Vicksburg native graduated from St. Aloysius in 1978. His father, Cecil, was a Mississippi Highway Patrol trooper and later a Warren County deputy sheriff. His mother, Mildred, was a successful businesswoman who managed many of the late F. L. Cappert’s endeavors. His brother Ricky is an area attorney and former Warren County prosecutor.

Sheriff Johnson served 28 years with the Mississippi Department of Public Safety, first as a Highway Patrol trooper and later as an investigator with Mississippi Bureau of Investigation. After retiring from MBI, he joined the Jones County Sheriff’s Department as a major, serving as jail administrator.

Johnson defeated incumbent Sheriff Chris Sargent in 2015, and he bested Sargent again in August, garnering 62 percent of the votes cast in the Democratic primary. He was unopposed in the general election. Johnson cited his use of social media and his accessibility to the media and the public as keys to his success. Many in Jasper County cite his open-door policy as the reason Johnson has become so successful in fighting crime in the area.

The sheriff published his cell number from the outset of his term, so anyone can reach out to him.

Johnson and his wife of 25 years, Melissa, live in the Stringer community, south of Bay Springs. They have two children.