Oscar Christopher McNeil, of Vicksburg, is one of 10 men on Mississippi's Most Wanted list. (photo courtesy MDPS)

A Vicksburg man is on the newly launched list of Mississippi’s Most Wanted.

Oscar Christopher McNeil is wanted by the Jefferson County Sheriff’s Department and the Mississippi Bureau of Investigation for the violent charges of aggravated assault and armed robbery. In October 2018, the Jefferson County Sheriff’s Office issued arrest warrants for McNeil for robbing a man at knifepoint and then stabbing him in the neck. McNeil fled after the stabbing and remains at large. McNeil reportedly has an artificial left arm and tattoos on his right arm. McNeil should be considered armed and dangerous.

Thursday, Sean Tindell, commissioner for the Mississippi Department of Public Safety announced the launch of Mississippi’s Most Wanted list. This list is compiled by the Mississippi Bureau of Investigation in conjunction with law enforcement agencies throughout the state and includes 10 of Mississippi’s most wanted fugitives. The full list with details is available at www.dps.ms.gov/ms-most-wanted.

“It is my hope that with this list, Mississippians can help capture the fugitives labeled as Mississippi’s Most Wanted,” said Gov Tate Reeves in a statement. “We can work together and make this great state safer.” 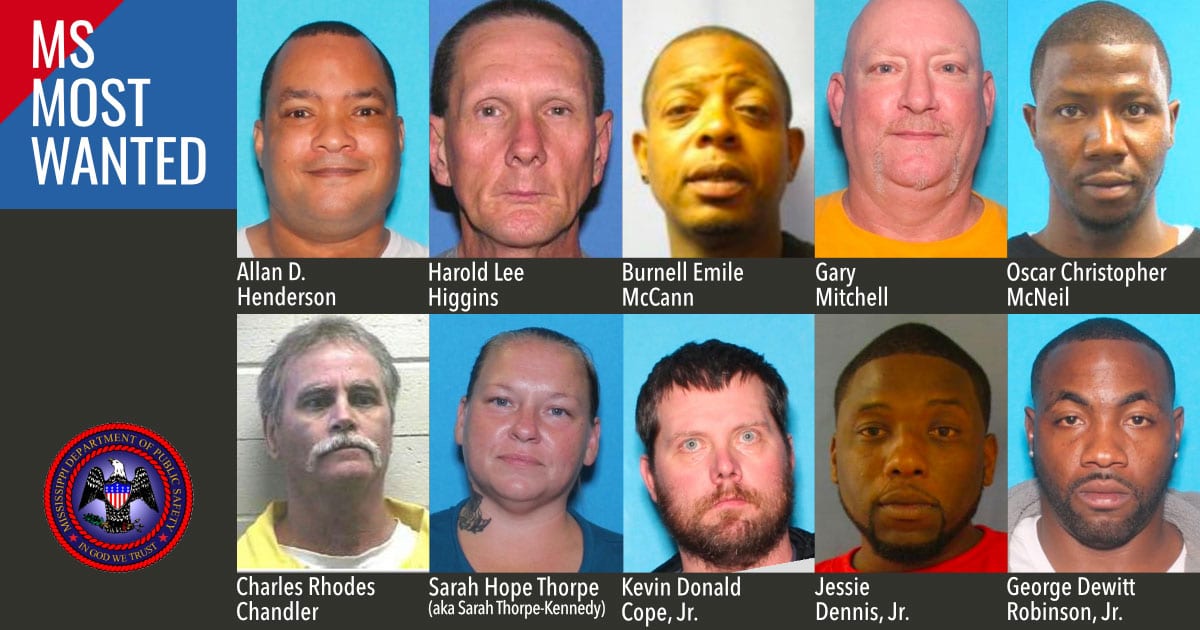 “The individuals on this list pose a very serious threat to our communities,” Tindell said. “We are asking for the public’s assistance in locating these individuals. It is our hope that Mississippi’s Most Wanted list will increase exposure and lead to the capture and arrest of these fugitives.”

If you have information on the whereabouts of any of the individuals on Mississippi’s Most Wanted list, please contact Crime Stoppers at 1-888-8CRIMES (1-888-827-4637). Callers can remain anonymous and may be eligible for a reward for information leading to an arrest and indictment of the suspect.

It is important to note that all individuals charged with a crime are presumed innocent unless and until proven guilty beyond a reasonable doubt in a court of competent jurisdiction.