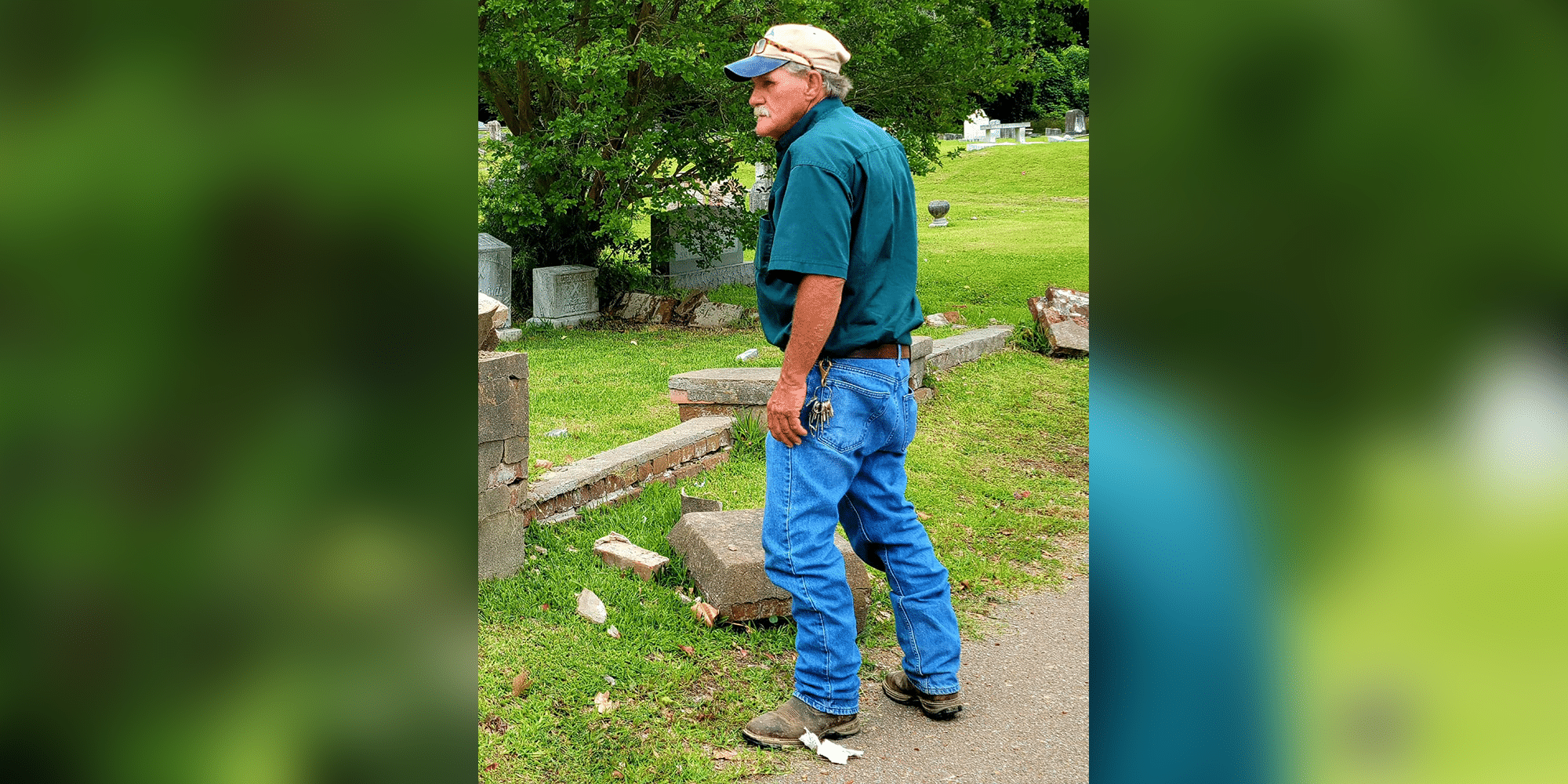 Several tombstones, markers and retaining walls were vandalized in the city cemetery in mid-May by unknown vandals.

“We came in on Monday morning, about 3 weeks ago, and saw the damage. Over that weekend they knocked down several markers,” said Venable Moore, who has been over the cemetery since 1990. “In 1972 or 3 we had a landslide by Skyfarm and a lot of stones and crypts washed out onto the street. About a year and a half ago we had some isolated vandalism but this is the worst single case we’ve had since I’ve been here.” 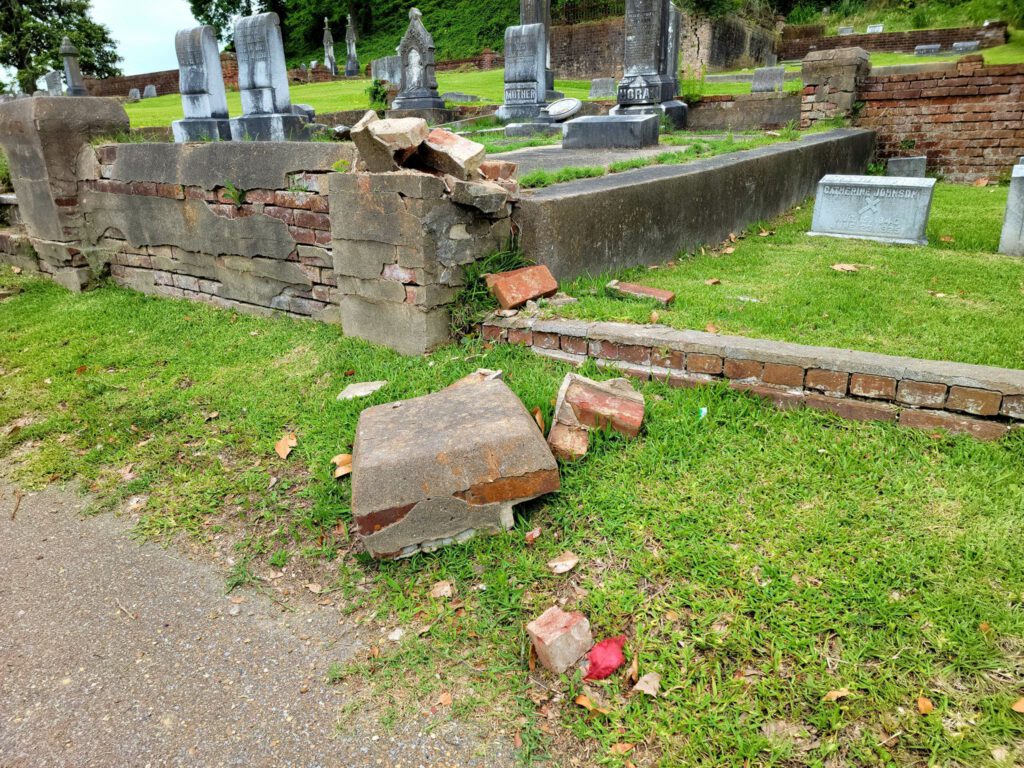 Vandals knocked down this wall at the city cemetery. (Photo by David Day)

Familiar names and plots in the cemetery were damaged with no discernable intent apparent. “It was probably teenagers. They knocked over stones and broke a water line, leaving it running for no reason. Just to be mean,” explained Moore. “They’ve mentioned letting me buy trail cameras and talked about putting video cameras in here, but so far we haven’t gotten anything.”

The Vicksburg Daily News called Alderman Michael Mayfield and he picked up right away, “We are looking at installing some cameras in the cemetery. One problem we’re having is getting connected to the internet. Once we have that we will have an open door to getting those cameras installed. They will be along Skyfarm and Lovers Lane as well as inside the cemetery. That will give us a great snapshot of who is in there, especially after hours,” said Mayfield. He went on to offer, “Vandalism is not new at the cemetery. At one time we had people taking flowers and littering. It’s nothing new.” 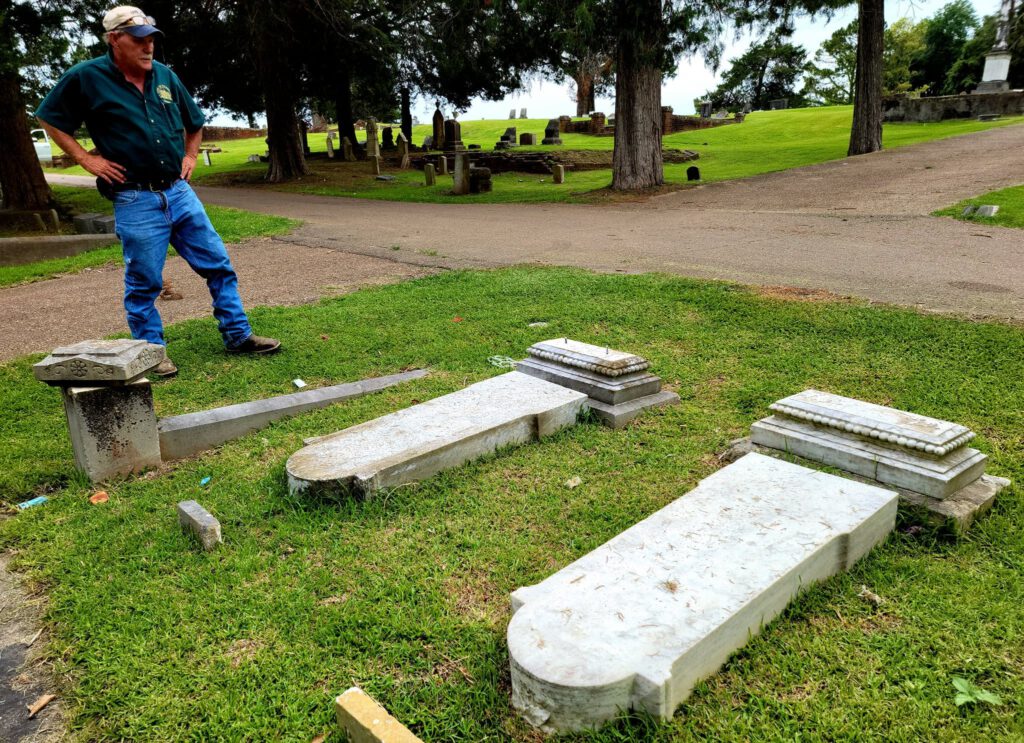 Moore noted that one of these fallen markers notes the final resting place of a Civil War spy. (Photo by David Day)

Some commentary on social media mentioned damage to the Soldiers Rest part of the cemetery, but that area remained largely unscathed. There was damage to the north and south of that area, but none of the Civil War Soldier markers appear to have been damaged.

A landscaping crew was working the cemetery, so the Vicksburg Daily News inquired with Moore about the possibility of tombstone damage from them and their equipment, “It’s going to happen. They may bump something or make a bad turn and clip a stone, but they are very good about fixing any damage they may create. Most of their work is with the weed eaters, not tractors. Not only that but we inspect the areas they work so if there was damage we would most likely see it right away.”

David Brown was working a weed eater and said “You can look at our equipment and see if it’s us or not. Our tractors don’t have any damage. If you hit one of these heavy stones it’s going to leave a mark. We try very hard to respect where we work, just like it was our family.” 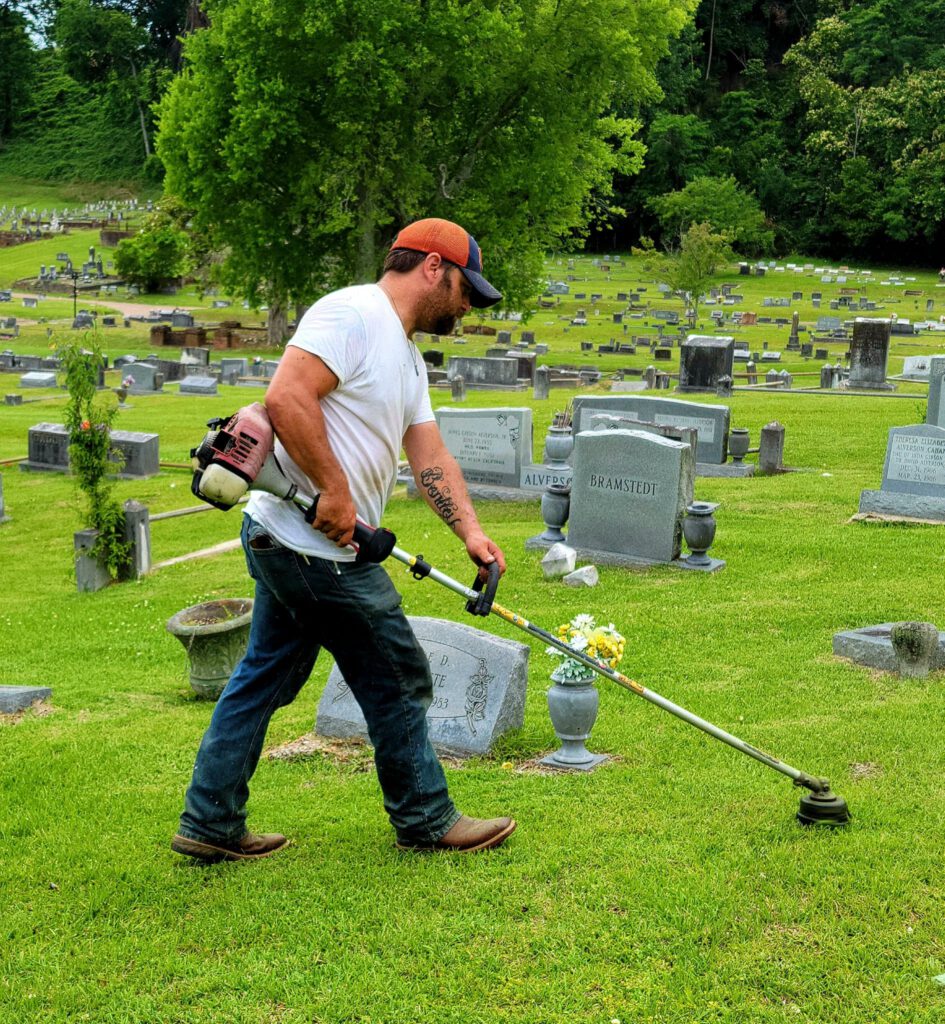 David Brown and his team work for a contractor landscaping the cemetery. (Photo by David Day)

The city is in a precarious situation with repairing the stones because of the way the law is written. It used to be when a person was buried there the family would sign a perpetual maintenance contract so the city can maintain the cemetery. However, the family owns the property where the body was buried and the markers or structures there are, therefore, family property and the family is liable for repairing those structures. The city, by law, cannot spend your tax dollars to repair the private property.

That law was changed a few years ago so the cemetery can now do whatever needs to be done to maintain the headstones and grounds in the newer plots. Unfortunately, most of the damaged stones were placed in the era when the cemetery plots were private property. 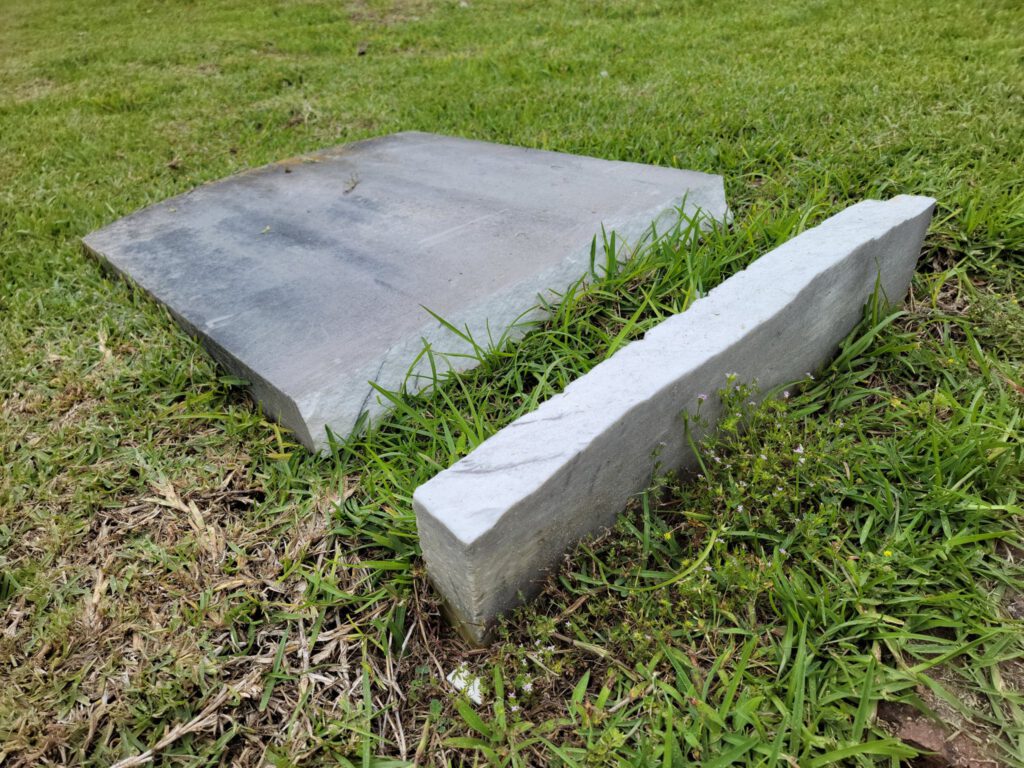 “They had to kick it over. Those things are heavy” – Venable Moore.
(Photo by David Day)

“Tracking down the family of a person buried here in 1897 so we can get legal permission to fix their stone is difficult and an issue for the legal folks,” surmised Moore. “I’m down a crew member right now and we’re doing all we can.” 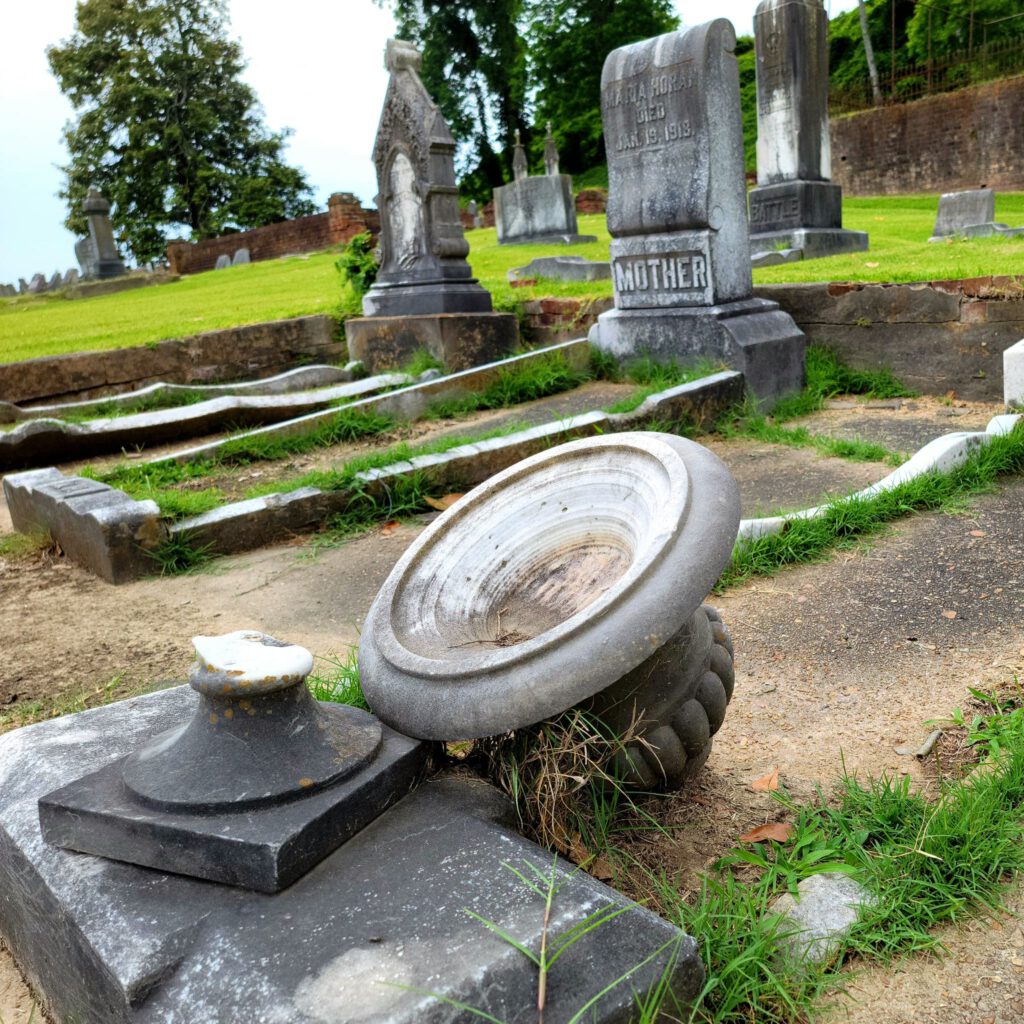 The flower pot was toppled by those of nefarious intent. (Photo by David Day)