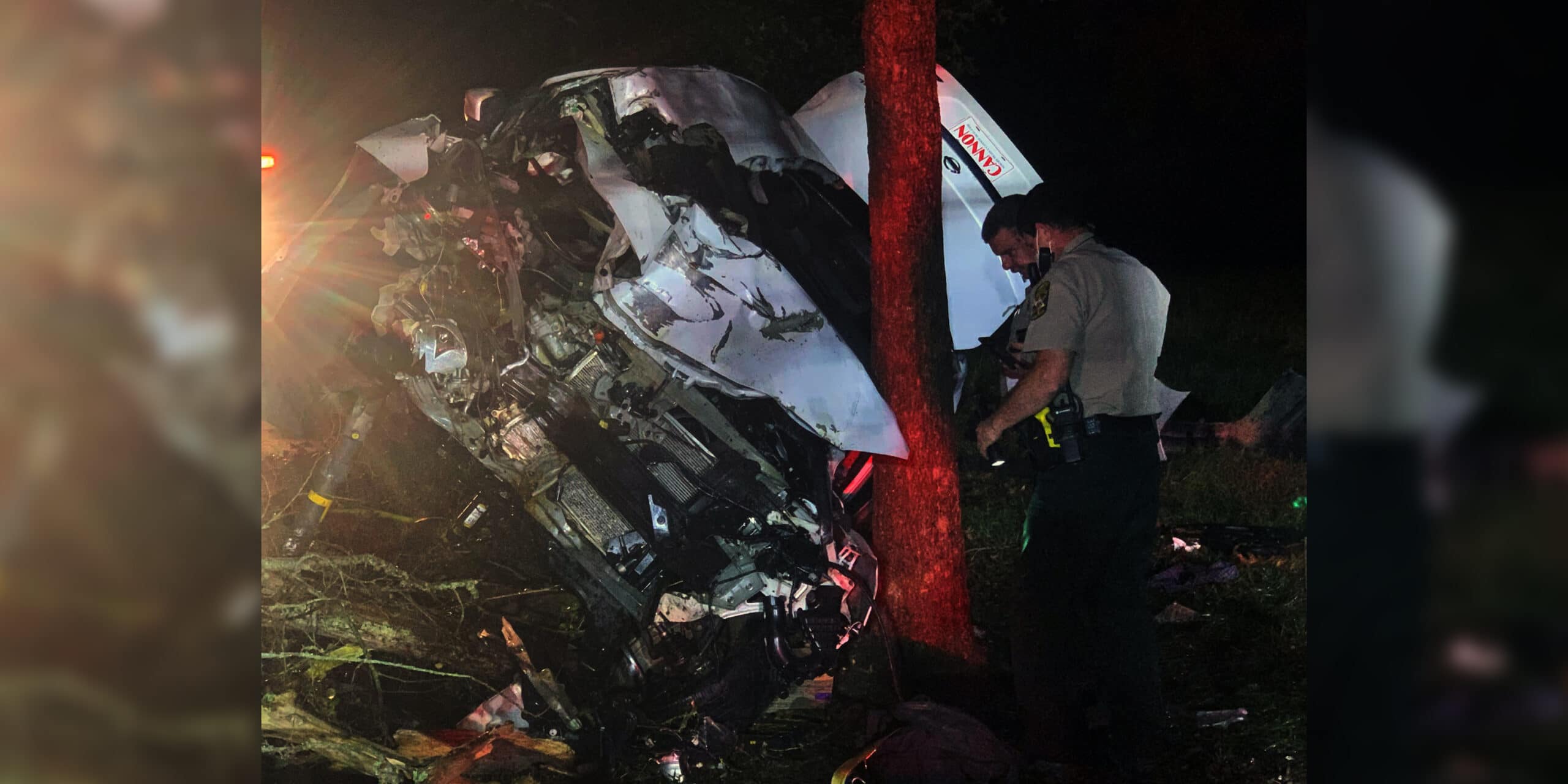 A Nissan left the roadway in Warren County and struck a tree, erupting into flames and entrapping the two occupants inside.

The accident occurred around 6 p.m. Wednesday in the 5200 block of Warriors Trail near Bovina.

Vicksburg and Warren County Firefighters along with multiple Warren County Sheriff’s personnel worked in tandem to extinguish the flames and rescue the passengers from the wreckage.  According to Sheriff Martin Pace, rescuers worked over an hour to free the victims from the mangled vehicle. 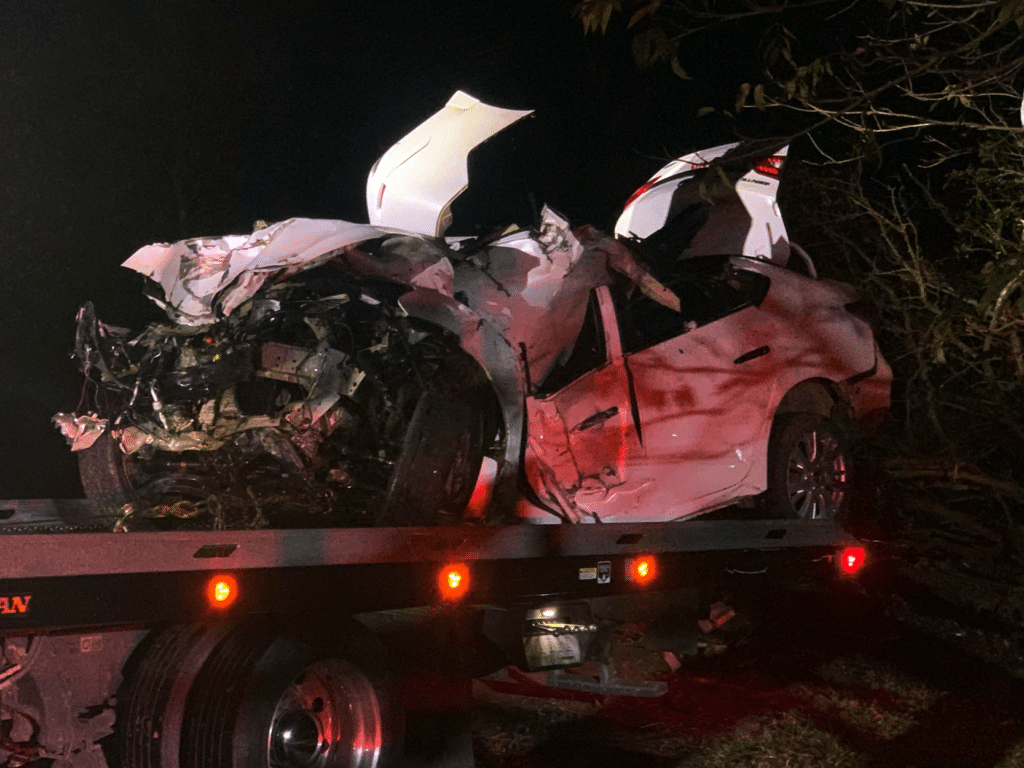 Both passengers suffered serious injuries and were transported to UMMC for treatment.  Due to the severity of the injuries, a helicopter was dispatched to airlift one of the victims and the flight crew was brought from the landing zone at Clear Creek golf course to the scene to render immediate aid.  The second passenger was transported via a Vicksburg Fire Medic Unit.

A dog was also in the vehicle and was taken by Warren County Sheriff Martin Pace to Animal Medical Clinic for treatment by Dr. Krapac.

Warren County Deputy Robert Jackson is investigating the accident on behalf of the Sheriffs Office. 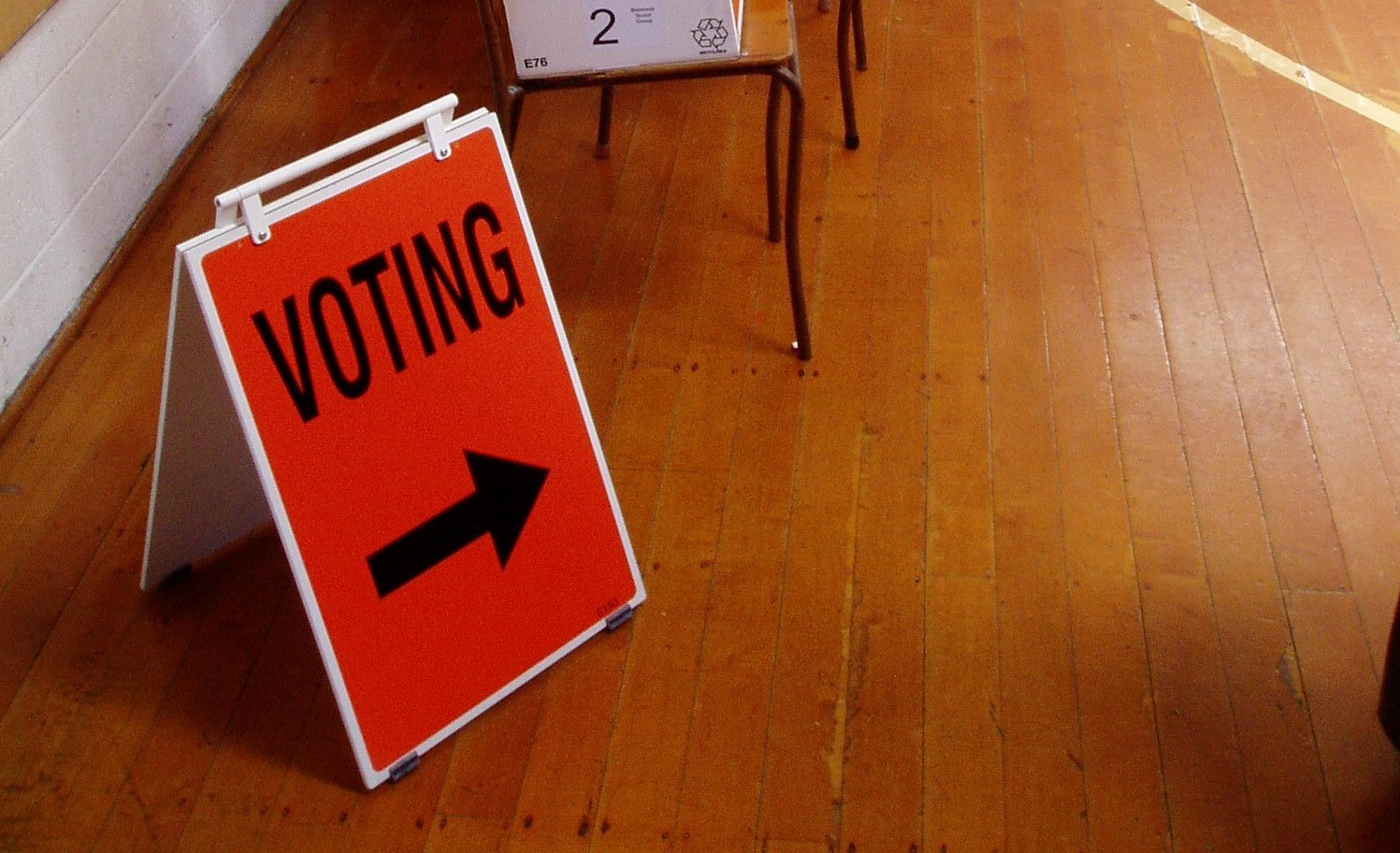 More than 78% of the state’s voters said ‘yes’ to Initiative 47, which proposed ending the state’s system of electing statewide officials.

Under Mississippi law, candidates don’t only have to win the majority of votes, they also have to win in the majority of the state’s House districts. In a race where no candidates win both, the decision then goes to the Mississippi House of Representatives. The law was put on the books to ensure majority Black voting districts would not hold sway in the selection of the state’s high offices.

Under Initiative 47, this pseudo Electoral College will be abolished, and the popular vote will decide the winner in statewide races. If no candidate wins the majority of votes in the state, a run-off election will be held.

The initiative came about as a result of legislation that proposed amending the state constitution, House Concurrent Resolution 47. A constitutional amendment proposed by the legislature requires a majority of Mississippi voters approve the change, which they did Tuesday.

The last time an election for a statewide office was disputed under the old law was the governor’s race in 1999. Neither candidate, Democrat Ronnie Musgrove nor Republican Mike Parker, earned a clear 50% plus one popular majority (although Musgrove had a slight lead), and they split the House districts evenly at 61 each. The Mississippi House of Representatives, then in Democratic control, put Musgrove into office.

On Election Day, the U.S. reported more than 92,000 new COVID-19 cases and at least 1,130 deaths as the viral surge continues from coast to coast. Especially hard hit are the northern tier of Midwest states including Wisconsin — with a seven-day new case average nearing 5,000 cases daily — North and South Dakota, Montana and Iowa. The death rate in these states is also climbing.

Across the nation, the new case rate has risen 46% and the death rate 14% over the past two weeks.

In Warren County, the Mississippi State Department of Health reported seven new COVID-19 cases Wednesday, and no new deaths. The cumulative number of cases in Warren County to date is 1,591, and the county’s death toll is 56.

Statewide, MSDH reported 766 new COVID-19 cases Wednesday, bringing the total cumulative confirmed cases in Mississippi to 122,275. The seven-day average of new cases is 665.4, about 167 cases higher than a month ago.

MSDH reported Wednesday that 13 more Mississippians died of COVID-19 statewide. The cumulative number of deaths in the state is 3,397. The state’s rate of deaths to confirmed cases is about 2.8%.

The 13 deaths MSDH reported Wednesday occurred between Oct. 13 and Nov. 3 in the following counties:

New cases and deaths were reported to MSDH as of 6 p.m. Tuesday, Nov. 3. MSDH usually reports statistics on the COVID-19 coronavirus each day based on the previous day’s testing and death reports.

The number of Mississippians hospitalized for the virus as of 6 p.m. Monday, Nov. 2, was 672, more than half of the late July peak of about 1,200. The number includes 576 with confirmed cases of COVID-19 and 96 people with suspected but unconfirmed cases. Of those with confirmed infections, 168 were critically ill and in intensive care units and 73 were on ventilators. 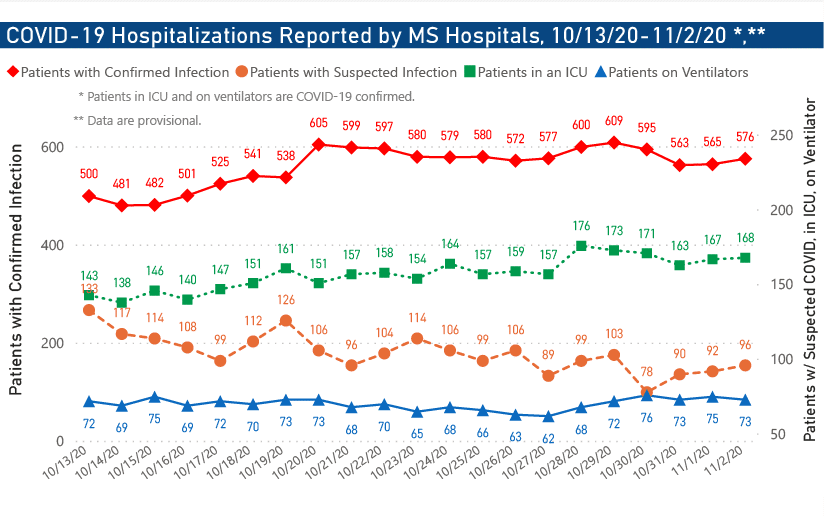 MSDH has estimated the number of people who can be presumed recovered from COVID-19 in Mississippi. That number is 105,839 through Sunday, Nov. 1. This figure is updated weekly. It represents about 88.1% of the cumulative 122,275 cases reported as of Wednesday, Nov. 4.

The number of cases in Warren County three weeks ago, Wednesday, Oct. 14, was 1,481, therefore the estimated number of people presumed recovered in the county is 1,425, or about 89.6% of the 1,584 cumulative cases reported as of Wednesday, Nov. 4. The county has an estimated 110 active cases.

The total number of Mississippians tested for COVID-19 (PCR and antigen tests identifying current infections) as of Saturday, Oct. 31 (the latest statewide testing results reported by MSDH), is 1,049,479 or about 35.3% of the state’s 2.976 million residents. Without daily updated number of tests, it is impossible to accurately calculate Mississippi’s positivity rate (positive results to tests, seven-day average), however, the rate was 4.5% Tuesday, according to Johns Hopkins University. The national rate is 6.7%, and 5% or lower indicates adequate testing.