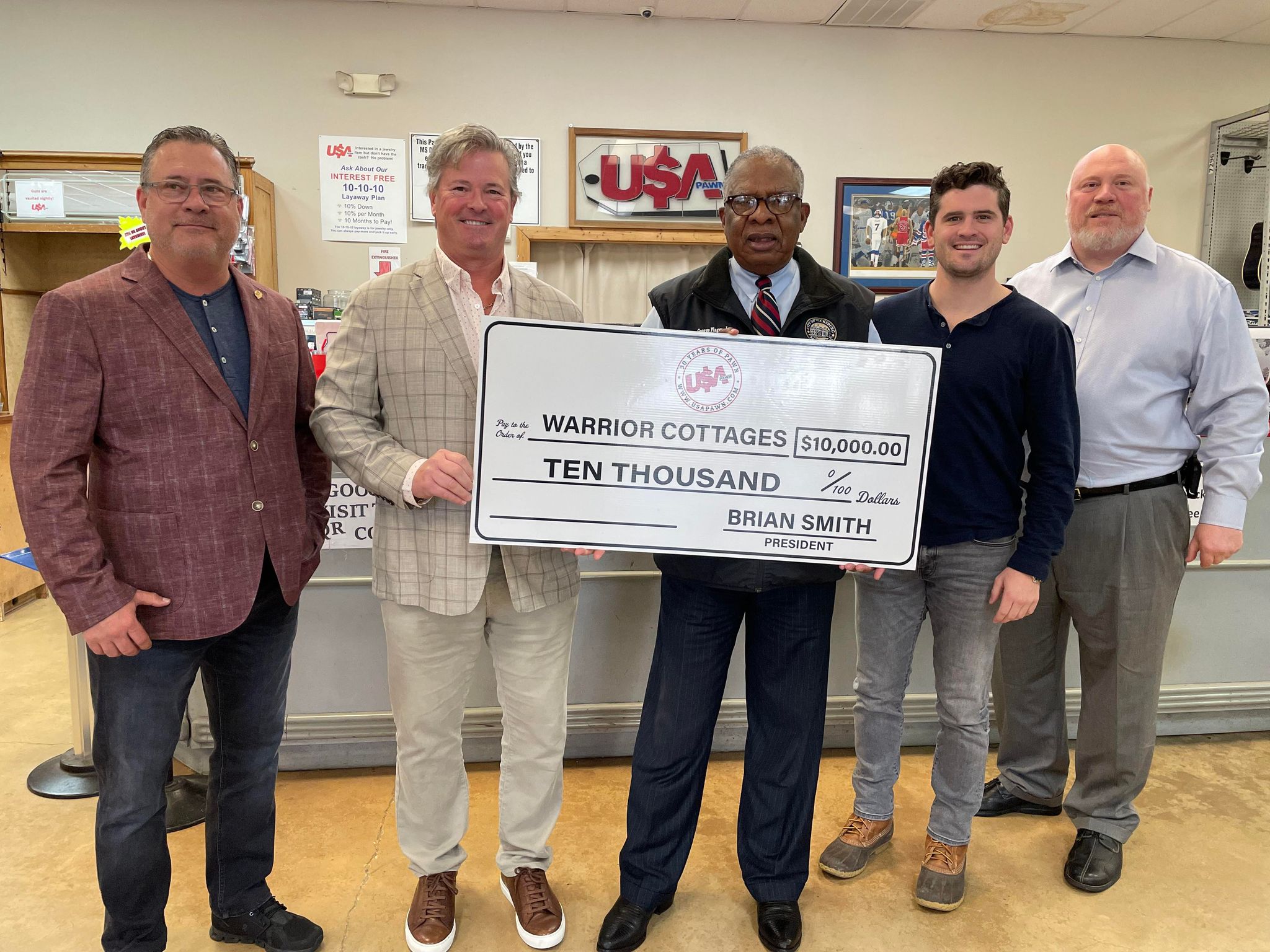 Warrior Cottages is an upcoming housing project which will provide tiny homes to veterans needing shelter and aim to help eliminate veteran homelessness in Vicksburg. On Wednesday, USA Pawn presented a check for $10,000 to help aid in the task.

“We’re here today to thank the Mississippi Center for Police & Sheriffs Warrior Cottage and USA Pawn’s Nick and Bryan for this generous donation of $10,000 for us to help with the assistance housing for the veterans,” said Vicksburg Mayor George Flaggs, Jr. who was present at the event to accept the check on behalf of Warrior Cottages. “It couldn’t have come at a better time,” added Flaggs, citing the closeness of Veterans Day.

Brian Smith founded USA Pawn in 1991 and currently operates as its president. Since its founding, the business has grown to six locations throughout Jackson, Pearl, Canton and Vicksburg. Nick Fulton, Smith’s brother-in-law, joined the family business and worked his way up from counter to partner and owner.

“We poured our hearts and souls into this business and grew from one small store in Jackson, Mississippi to now six locations in the area,” said Fulton. “It was a struggle but with the help of our industry trade association, the National Pawnbrokers Association (NPA) and countless pioneering pawnbrokers such as the late Charles R. Jones, the late Bob Stogner and Bob Moulton, I soaked up everything I could. “

Owners Smith and Fulton recently celebrated USA Pawn’s 30 year anniversary at each of their six locations. The celebration was attended by Mississippi Attorney General Lynn Fitch, several state senators, the local sheriff and countless friends and customers. The company decided to celebrate their 30-year milestone by providing support to Warrior Cottages by presenting a $10,000 check to aid the project. 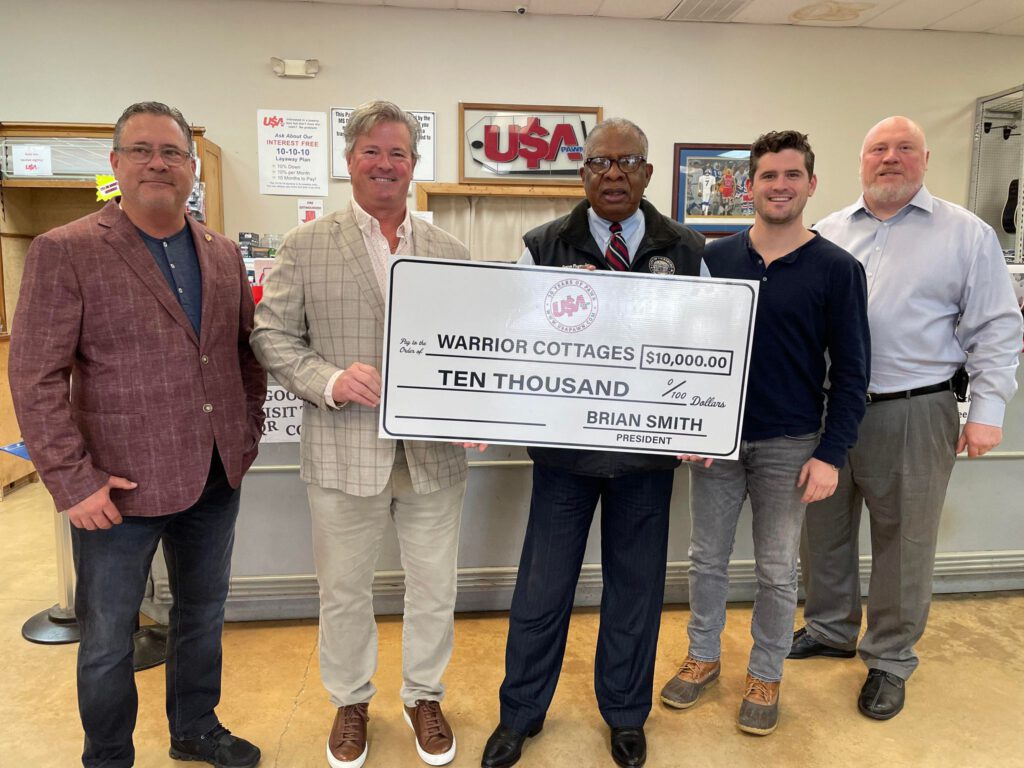 “We’ve been partnering with the police chief’s and sheriff’s association for many years. We’ve dealt with them through Top Cops and one of their older charities in Jackson, Mississippi called Hope Home for Girls.” said Fulton. He went on to explain that during their 30th anniversary they decided to bring in Steven Pickett, executive director for the project, and learned about the new charity aimed at assisting veterans.

“I thought it was a great idea,” said Fulton. “We’ve been involved in some veteran charities across the country; the Folds of Honor and Warrior Bonfire which are big, national chains — and it’s good to be partnering with charities, but when you’ve got one that’s in your own backyard, four miles from your store, that you can actually put your eyes on it and you can actually be there and be part of it, is a big deal for USA Pawn.”

“I’m excited they let us come in on [the project]. Of course, we’re always supporting veterans. They have earned a place to be, to have a place they can go,” said Smith. “We’re getting ready to have some houses put up so some of the veterans coming in that have no place to go, will have a place to live.”

The project has been a two year renovation of the McDonald Mobile Home Park on Highway 61 South, according to Steven Pickett, executive director for the project. The nonprofit organization MS Center for Police & Sheriffs purchased the property in order to provide affordable housing.

The Warrior Cottage project will be located at 3363 Highway 61 South and initially consist of 12 tiny homes with hopes of expansion by purchase of adjoining property. Each home will cost $42,000 to complete. Similar projects may be in the future for other areas of the state, however Pickett says they want the Vicksburg project to be completed before expanding any further.

The first of these 12 houses will be named The USA Pawn Warrior Cottage. The tiny homes will offer homeless veterans emergency and long-term shelter and utilities, paid for by the nonprofit organization.

Veterans wishing to become a resident will be referred by VA, social service organizations and the Department of Corrections.

“We just love veterans and it’s just criminal they way they get treated sometimes and we’re excited we can be a part of giving them a place that they’ve earned through their service,” said Smith.

“My hope is that there will be other partners that will come forward and join us in supporting this charity and help us eliminate homelessness for veterans,” said Fulton.