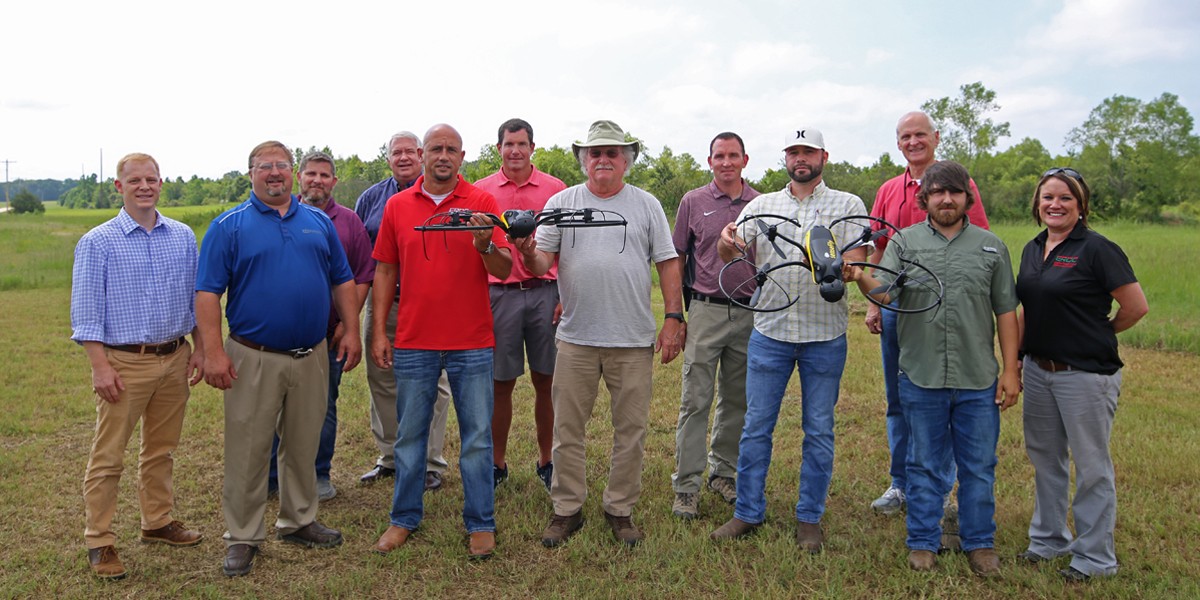 It’s not often that someone is credited with advancing an entire program within the U.S. Army Corps of Engineers, but Jenny Laird has done just that.

Laird will describe the partnership in a June 24 webinar, “Preparing the Drone Workforce,” hosted by the National Association for Community College Entrepreneurship in conjunction with Hinds Community College.

While UAS technology has been around for decades, it has just recently become rapidly accessible. Over the last few years, as the technology advanced and became more affordable, the USACE began using it in new and innovative ways. With no unified standard for the USACE UAS program, adoption of the technology throughout the organization became disorganized and decentralized.

Jason Kirkpatrick, the aviation program manager at USACE headquarters, had been in his position for one year when, in his annual statement of assurance, he advised the Army Chief of Staff that the USACE UAS program was at high risk, primarily for training.

“The foundation of any well-run technology program is the establishment of good standards, training and oversight,” he said. “And training was the challenge.”

USACE and Army leadership wanted to ensure UAS training was executed in a stepwise, professional manner. They focused on how the USACE was going to use this technology while considering public concerns and cybersecurity challenges.

“USACE is a federal enterprise, so it should have standards and a culture of safety and risk management that exceed that of a private individual who might operate these systems,” Kirkpatrick said. “We have a responsibility to the public to get trained. Safety, privacy and security training is our due diligence to earn public trust in our operations of these systems.”

“We couldn’t stop what we were doing to take a year or two to build a training program. That Hinds already had a similar program of instruction and setting up training through the ERDC Graduate Institute was very helpful. Starting a training program from scratch is a lengthy process — it takes a lot of paperwork.”

Kirkpatrick added that by utilizing the already existing partnership between the ERDC Graduate Institute and Hinds Community College, USACE employees are able to sign up for training directly through the institute, eliminating billing issues and reducing administrative burdens. And although the training is outsourced, Laird met personally with instructors to ensure USACE standards were communicated and observed in the training.

“There are two parts to the training: Part 107 and testing, which is four days of classroom training to operate the UAS and one day to take the Federal Aviation Administration’s knowledge-based test. You have to have a Part 107 to have a license. FAA regulations require pilots of UAS used for commercial purposes to have a remote certificate (license). Then there is also the primary flight training to actually fly the systems ⸺ that training is optional but suggested to new UAS pilots,” Laird said.

“The ERDC and Hinds Community College have had an Educational Partnership Agreement since 2017, specific to UAS research and development,” she added. “Hinds and the ERDC UAS program have been working together to create a certification program for UAS since April 2017. So far, 16 persons have completed the primary flight training and 100 have completed the Part 107 training since November 2018.”

“Hinds Community College had the only UAS program in Mississippi at the time,” said Dr. Chad Stocks, vice president of workforce, career-technical and adult education at Hinds Community College, and who also manages the Hinds team that coordinates and delivers the UAS training for ERDC. “A few graduates from the UAS program were hired at ERDC, which helped spread the word about this innovative program.”

“ERDC management approached the Hinds executive team about delivering a customized, non-credit Remote Pilot Certificate (Part 107) training to build a pipeline of UAS pilots and operators for USACE because the college had experience collaborating with the Camp Shelby Joint Forces Training Center on delivering training for Army Guard and Reserve unmanned aircraft operators from across the country,” Stocks said.

“It was a great program,” he said. “The entire Hinds staff were professional, knowledgeable and invested in your success as a student. I had two instructors that had a high level of expertise about small UAS operations and aviation — they were top notch.”

“The risk assessment for the USACE UAS program went from red to green rapidly because of this training,” Kirkpatrick said. “This left resources available to support field operations, reduced paperwork and accelerated the entire USACE aviation program.”

The advancements in training and the expansion of the program will contribute to further improvements in USACE’s civil works and military missions.