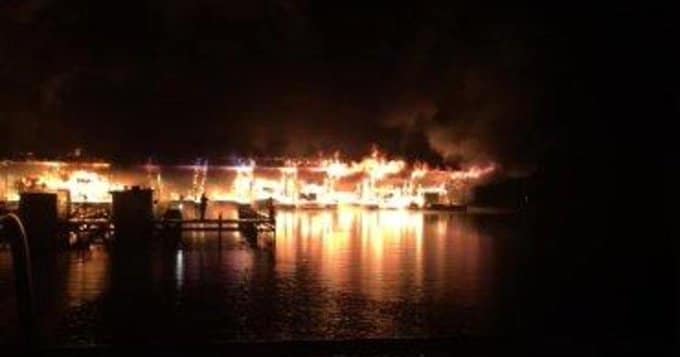 A blaze that consumed at least 35 houseboats docked on the Tennessee River in Alabama had boaters leaping into the river to escape the flames early this morning.

Reports of the Jackson County fire came in just after midnight Monday. Numerous media outlets are reporting that there are fatalities among the seven individuals sent to the hospital and seven others reported missing.

“There were numerous people rescued from the water who had escaped by going into the water,” Jackson County Chief Sheriff’s Deputy Rocky Harnen told The Associated Press around dawn. “We’re trying to get divers down here to search for possible victims in the water.”

The fire consumed the wooden dock along with the boats, all of which contained propane tanks and gas tanks. Crews are using booms to contain fuel on the water.