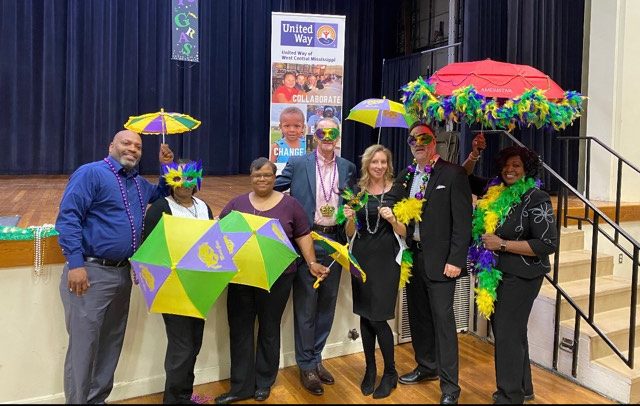 United Way’s Annual Meeting and Awards Luncheon celebrated a tough year of hard decisions and disaster relief but had many inspiring successes along the way.

“The 2019 Board of Directors worked overtime this year,”  said United Way Executive Director Michele Connelly. “That will directly affect the future of United Way.”

Connelly gave a synopsis of 2019 mentioning the organization’s annual events. One popular event in Vicksburg for the past two years is Dine and Stroll the Old Mississippi Bridge: Supper on the ‘Sip. Tickets for the event sold out in 2018 and 2019. Last year it sold out in less than 13 hours.

It is the organization’s mission to build a stronger, healthier community by combining the human, financial, and strategic resources necessary to deliver measurable improvements and solutions to the critical issues facing the community.

“I strongly believe this goal was not only met but was surpassed with a great deal of hard work, tenacity and passion,” Connelly said.

United Way set a campaign fundraising goal of $654,900 and, to date, it has met 97 percent of that goal through the efforts of the staff and campaign volunteers. This is the closest the organization has been to its goal in at least five years. The 2019 campaign closes Feb. 28.

“There is still time to give to the campaign,” Connelly said.

To continue to do great work, Connelly said it takes creative ways to raise funds for the organization’s 19 partner agencies.

“The generosity of this community is amazing,” she said, “and their willingness to put ‘fun’ back in fundraising has been inspiring.”

Board President Sheila McKinnis announced that Connie West from the Vicksburg Warren School District is this year’s recipient of the Leadership Award.

United Way set the goal to become an Excel by 5 community, and it was under West’s leadership that Vicksburg Warren reached that goal in March 2019. Excel by 5 is a state-led initiative targeting success in children ages birth to 5-years-old.

“We looked for someone whose leadership ability could make this dream come true,” McKinnis said.

The recipient of the Volunteer of the Year award is Larry Walker.

Volunteers are a tremendous part of what United Way is able to do. With an all-female office staff of four full-time employees and one part-time employee, it is most commonly the volunteers who offer a helping hand throughout the year.

“It has been said many times that the volunteers are the very lifeblood of the United Way,” said former United Way Chairman Tim Reeves.

Walker has been a volunteer with the organization for two years and, according to United Way staff, “has a heart bigger than Vicksburg.”

“I am so thankful for this award and everybody that had something to do with it,” Walker said.

The winner of a $250 scholarship was Anna Ware Brown, a senior at St. Aloysius High School and the daughter of Reverend and Mrs. Tim Brown.

The winner of a $500 scholarship was Ann Wallace DeRossette, a senior at Warren Central High School and the daughter of Mr. and Mrs. Tim DeRossette.

Following the scholarship winners, the Spirit of Vicksburg Award was announced.

“This time last year, we were only barely becoming aware of the threat—the rising water. We had no idea what the next six months would hold,” Reeves said, referring to the Yazoo Backwater Flood of 2019.

The Spirit of Vicksburg Award is usually given to one particular person, but this year’s recipient was the South Delta Community.

United Way, whose primary mission does not solely involve disaster relief, waited for other agencies to raise their hands and take on the responsibility of flood relief as the emergency worsened. When no hand was raised United Way answered the call to become the fiscal agent and manage flood relief cases, filling the gaps where the state and federal emergency management agencies did not.

“Through events and generous donations, $115,143.87 was raised and distributed to residents who suffered damage,” Reeves said, “and that distribution of funds has remained amazingly transparent and well-managed by United Way staff, Board of Directors and the Long Term Recovery Committee that was thankfully formed in 2011.”

Haley Renschler was named Campaign Coordinator of the Year.

Although new to Vicksburg, Renschler was a liaison between the community and her co-workers at International Paper. She came up with outside-the-box ideas to generate campaign dollars.

“This person understands the importance of getting people involved so that they can make the conscious decision to invest in United Way and our community,” said Josie Mayfield-Hudson, United Way co-campaign chairwoman.

Patsy Counts and Teressa Danzyck won the Community Investment Panel Volunteers of the Year award for their hard work, dedication and engagement of panel discussions.

Finally, out of the organization’s 19 partner agencies, Walter Fraizer, director of Grace Christian Counseling Center received the 2019 Agency Director of the Year award.

“This year’s award winner has been an agency director as long as I can remember,” said David Cox, Community Investment chairman. “You can count on (Fraizer) to not just be in attendance, but to be engaged and active.”

“As you have seen, there is much to celebrate and reflect upon this past year,” Connelly said in closing. “The generosity experienced in 2019 was awe-inspiring. … I look forward to working with each of you in 2020, as we continue to live United.”

To find out more about the United Way of West Central Mississippi or to donate, visit the organization’s website at www.unitedwayvicksburg.org.