The cumulative number of COVID-19 cases in the United States officially went over 13 million as of Saturday morning, with more than 205,000 new cases reported Friday and 1,412 deaths. Hospitalizations continue to climb, with nearly 90,000 patients straining the health care system to the breaking point in many areas.

The Mississippi State Department of Health reported another day of more than 1,000 new COVID-19 cases Saturday, the 14th time this month. The cumulative number of cases in the state is just under 150,000.

In Warren County, MSDH reported 15 new COVID-19 case Saturday and no new deaths. The cumulative number of cases in Warren County to date is 1,768, and the county’s death toll is 57. Although the county continues to have almost no deaths reported this month, its 14-day average of new cases has risen from about five cases per day at the beginning of the month to 8.5 cases. The seven-day average is 8.7.

Statewide, MSDH reported 1,553 new COVID-19 cases Saturday bringing the total cumulative confirmed cases in Mississippi to 149,940. The seven-day average of new cases is 1,077 per day, about 292 cases higher than the seven-day average a month ago, when the state’s numbers were already on the rise. The current averages are on par with numbers seen in July.

The 10 deaths MSDH reported Saturday occurred between Nov. 22 and Nov. 27 in the following counties:

New cases and deaths were reported to MSDH as of 6 p.m. Friday, Nov. 27. MSDH usually reports statistics on the COVID-19 coronavirus each day based on the previous day’s testing and death reports. 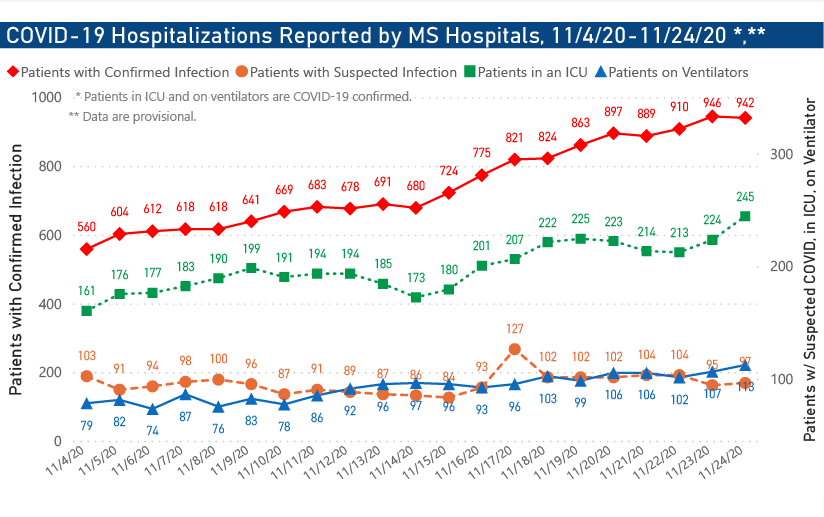 MSDH has estimated the number of people who can be presumed recovered from COVID-19 in Mississippi. That number is 121,637 through Sunday, Nov. 22. It represents about 81.1% of the cumulative 149,940 cases reported as of Saturday, Nov. 28.

The number of cases in Warren County three weeks ago, Saturday, Nov. 7, was 1,614, therefore the estimated number of people presumed recovered in the county is 1,557, or about 88.1% of the 1,768 cumulative cases reported as of Saturday, Nov. 28. The county has an estimated 154 active cases.

The total number of Mississippians tested for COVID-19 (PCR and antigen tests identifying current infections) as of Saturday, Nov. 21, is 1,237,802 or about 41.6% of the state’s 2.976 million residents. MSDH reports statewide test results once a week. Without daily updated numbers of tests, it is impossible to accurately calculate Mississippi’s positivity rate (positive results to tests, seven-day average); however, the estimated rate was 16.5% Friday, according to Johns Hopkins University. The national rate is 9.4%, and 5% or lower indicates adequate testing.