The location of the shooting at Athens and Alcorn Drive. Photo by David Day

Two people were injured by gunfire from a car.

At 2:29 a.m., Vicksburg police were alerted to a shooting at the intersection of Athens and Alcorn Drive. 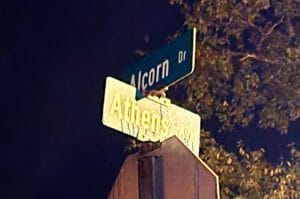 The intersection of Athens and Alcorn Drive. Photo by David Day

A pool of blood at the location of a drive-by shooting in Vicksburg. Photo by David Day.

Both victims got into a car and drove themselves to an area hospital where they are being treated. There is no word on their condition.

Vicksburg police are investigating the shooting. The Vicksburg Daily News will stay with this story and update you once the police department releases more information to us.

The area of the shooting at Athens and Alcorn Drive. Photo by David Day.