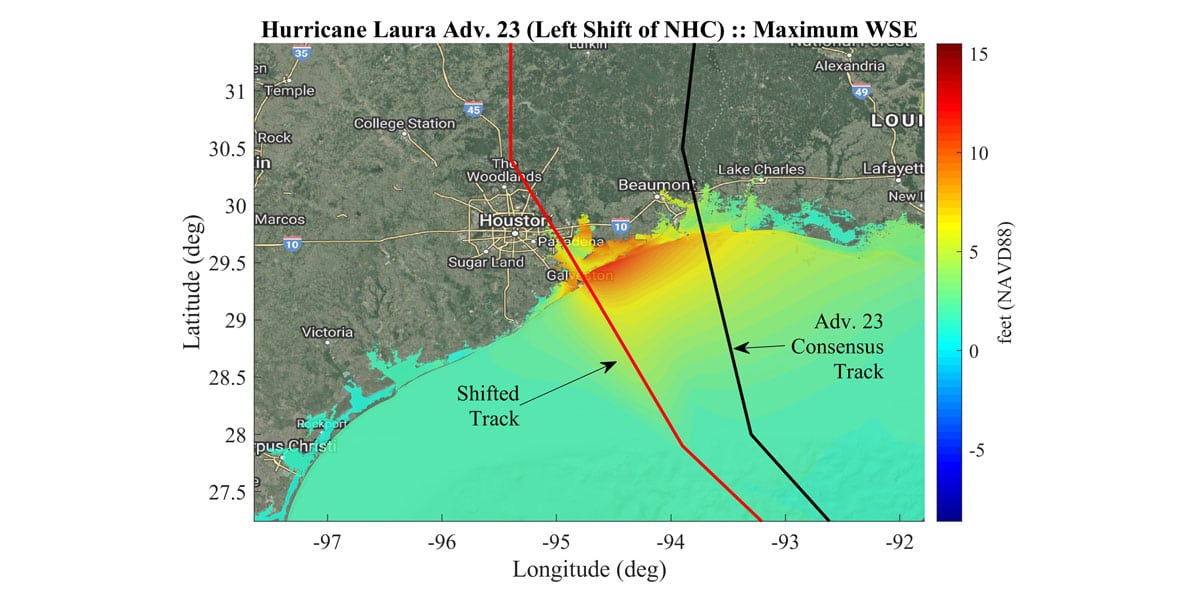 As a tropical system approaches the coastline and the intensity and impact of the storm becomes evident, officials and first responders brace for landfall by staging equipment and readying personnel for the aftermath. To assist in these efforts, researchers at the U.S. Army Engineer Research and Development Center use numerical modeling systems to help U.S. Army Corps of Engineers districts better prepare for storms.

The Advanced Circulation model is a higher-order accurate, physics-based and highly parallelized computational model. It is the USACE’s Hydrology, Hydraulics and Coastal Community of Practice preferred model for storm surge and circulation and is considered the industry standard for use.

Earlier this year, as Hurricane Laura approached the gulf coast, the National Oceanic and Atmospheric Administration’s National Hurricane Center began narrowing landfall predictions along the border between Texas and Louisiana. As some of the region fell within the USACE Galveston District’s area of responsibility, they immediately began preparing for the storm.

“We were contacted by the Galveston District through the USACE Reachback Operational Center and asked specifically to run some scenarios for them that would look at the structures they’re in charge of maintaining and operating to see what kind of impacts they could expect,” said Chris Massey, a research mathematician at the ERDC’s Coastal and Hydraulics Laboratory. “Specifically, they wanted us to run the consensus track from the NHC.”

Beginning with the NHC’s Advisory 23, CHL began storm surge simulations of Hurricane Laura making use of the ADCIRC mesh for the coast of Texas. That mesh has over 4.5 million nodes and over 8.9 million unstructured triangular elements with element sizes down to 20 meters in some key inland locations.

The ADCIRC model simulations use forcing values from tides, along with wind and surface level atmospheric pressure fields. The wind and pressure time series fields were derived from the NHC forecast advisories and computed by ADCIRC using its internal asymmetric cyclone vortex model.

“We worked with some of our partners at Louisiana State University, the University of Georgia and the Coastal Prediction Restoration Authority in Louisiana to get those winds and pressures,” Massey said. “They have an automated method for generating the necessary wind and pressure field input decks for the model. They were very gracious partners and let us have that setup to get us going to help the district.”

Once they had the consensus track, Massey and his team were able to edit it to alter the track location and the intensity of the storm for several different scenarios to see the impact on district assets.

“By that evening, we had three scenarios simulated with the results handed back over to the district for them to review,” Massey said. “We provided both some static images that showed what the maximum water levels would be, and then we also provided raw data files for them so that they could bring in their Geographic Information Systems with their GIS experts.”

“From the district’s perspective, this is very much operational support,” he added. “They are looking at gate operations, or places that might be potentially compromised during an event, so that they can start to plan and monitor and get things in place — it helps fill in their picture.”

The NHC’s mission is to save lives, mitigate property loss and improve economic efficiency by issuing the best watches, warnings, forecasts and analyses of hazardous tropical weather and by increasing understanding of these hazards. For ERDC and the USACE, the main goal of the ADCIRC model is to augment the information provided by the hurricane center with additional data, providing USACE districts and local partners the ability to make more informed decisions regarding operational structures and support.

“The model allows us to answer questions like when will the highest water levels be coming in, when will that water level get to a threshold height and how long will it be at that height,” Massey said.

“The Galveston District used the ERDC-produced ADCIRC scenarios to make informed operational recommendations to our partners on which areas are safe to position personnel and equipment and where to reposition our assets,” said Coraggio Maglio, Hydraulics and Hydrology branch chief at the Galveston District. “A 30-mile western shift in the hurricane’s landfall location would have had very different consequences for our region. When looking at overtopping scenarios for leveed areas, a single additional foot in total stormwater level can be a significant consideration.”

“The ADCIRC capabilities are important for all of our districts when they are planning operations and responses, because the model allows us to potentially shore up areas that may have been weakened,” Massey said. “It helps with planning, which can prevent further disaster, or positioning of resources for use after the fact.”

“The ability to provide this data to the officials in East Texas was vital during Hurricane Laura,” said Alicia Rea, Galveston District director of Emergency Management and Security. “Our district Commander Col. Tim Vail rode out the storm in Orange, Texas, with local officials at the Orange County Emergency Operations Center. He was able to provide our data in real time, which allowed the local officials to make quick and effective decisions. The work our team did during Laura will help foster our relationships along the Texas Coast well into the future.”

“This modelling effort really just supports the mission of the USACE in terms of flood risk management for the communities,” Massey said. “ERDC is here to bring our expertise to help our districts during this kind of situation ⸺ that’s the purpose of the UROC. We are here to support the operational needs of our districts for specific scenarios that involve specific district interests.”

The Mississippi Commission on Children’s Justice this week asked leaders in child welfare to rethink how the state’s system responds to allegations of child neglect rooted in poverty.

The model is one centered on hope. The idea is to give hope to parents and children who encounter the Department of Child Protection Services and the Youth Courts.

The Commission conducted three days of meetings with a leading proponent of hope-centered programs, Chan Hellman, Ph.D., of Tulsa, Oklahoma, on Oct. 20, 21, and 22 at the Gartin Justice Building and the Department of Child Protection Services in Jackson.

“The hope is that Dr. Hellman’s presentation will change our mindset, and we see a new way,” Taylor Cheeseman, Interim Commissioner of the Department of Child Protection Services, told CPS leaders, judges and court staff Oct. 21.

“Hope is the guiding framework of how we respond” in providing services to those in need, said Hellman, a professor of social work at the University of Oklahoma and Director of The Hope Research Center. Giving hope is an essential part of nurturing families and children toward improving their lives.

“Hope is the belief that the future will be better, and you have the power to make it so,” Hellman said.

His approach includes teaching people to do three things:

Hellman said action separates hope from a wish. “We are moving parents and families from wishing to hoping because we are going to make that pathway.”

CPS Deputy Commissioner Tonya Rogillio said it’s important to instill hope in the social work staff as well as the people they serve. The agency has a 30% turnover rate.

“I’m a firm believer that you can’t give what you don’t have,” Hellman said. He believes that creating a culture of hope lowers staff burnout and improves job satisfaction.

“If Mississippi embraces this, it could have tremendous impact,” said Justice Dawn Beam, co-chair of the Commission on Children’s Justice.

One of the biggest challenges of implementing a hope-centered program is getting beyond skepticism. “It feels like it’s kind of a fluffy rainbows and unicorns thing,” Hellman said.

Earlier in his career, he would have laughed at the idea, but as a quantitative psychologist, he has measured and documented results including improved grades for children. He studies the effect of hope on outcomes for children and adults. His research is focused on hope as a psychological strength helping children and adults overcome trauma and adversity. He is the co-author of the book “Hope Rising: How the Science of Hope Can Change Your Life.”

Hellman has spent 25 years working with victims of domestic violence, child maltreatment, homelessness and poverty. He knows the struggles. He grew up in poverty and was homeless from eighth grade through high school.

As a psychologist, he experienced a eureka moment 12 years ago when he interviewed a 19-year-old homeless man who had recently been diagnosed with HIV. The man was filled with hope and had plans for attending college. “It was a realization that I had spent my entire career focused on the wrong question. ‘What’s wrong with you?’” Hellman said, recalling the incident. His approach then shifted to “What happened to you?” and “What’s right with you?”

“Hope can be taught. It starts with goals, pathways and willpower,” Hellman told members of the Mississippi Programs of HOPE committee of the Commission on Children’s Justice during a discussion Oct. 22. “At the heart of change is our ability to understand the way things are and to imagine the way things could be.”

Chancellor Rhea Sheldon of Hattiesburg, co-chair of the Commission on Children’s Justice, said, “I’m excited to see what we are going to be able to do going forward with collaboration with nonprofits and Child Protection Services.”

“It’s a vision that we all can work together for the children of our state,” Justice Beam said. “We don’t need to dream with boundaries. We need to dream big.”

The Commission on Children’s Justice recently established Programs of HOPE to continue to address child neglect prevention. Five multidisciplinary committees were established to identify and recommend actions that can fill gaps, strengthen opportunities and lift up Mississippi families to a place where they can see a path toward better lives.

Programs of HOPE committees include Housing and Transportation; Opportunities for Treatment; Parent, Child and Family Supports; Economic Security; and Pathways of HOPE.

The Mississippi Supreme Court created the Commission on Children’s Justice in 2006 and tasked it to develop a statewide, comprehensive approach to improving the child welfare system; coordinate the three branches of government; and recommend changes to improve children’s safety, strengthen and support families, and promote public trust and confidence in the child welfare system. 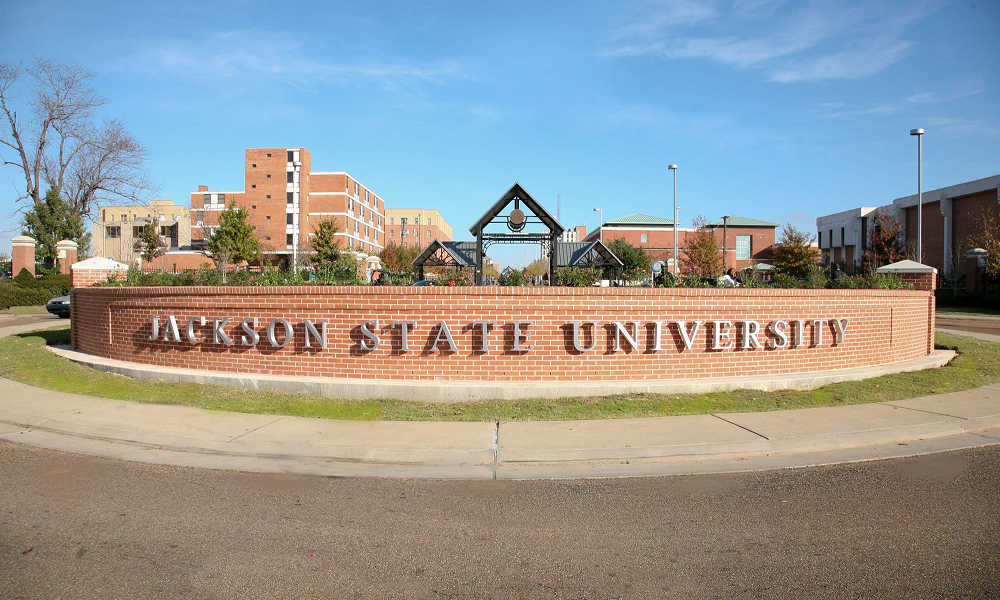 Jackson State University has been put on probation due to NCAA recruiting violations.

According to multiple reports, JSU had 34 student-athletes practice and play before they received their certification from the NCAA Eligibility Center.

The athletic program is also in trouble for a former staff member paying $300 to the godmother of a football prospect.

Listed below is the punishments the university faces due to the violations: