Those who keep us safe: Tracey Porter

Tracey Porter’s passion for helping others did not start when she was named deputy director of the Warren County Emergency Management Agency.

“My dad was always helping people, so he kind of showed me an example growing up to help people and not expect anything in return—just do it from your heart,” Porter said.

The Redwood native was hired at WCEMA in 2011 and since then, she has not slowed down.

“I actually was hired on as an admin, and it developed into me being named deputy director because of all the different things we do,” Porter said.

Six months into her tenure, severe weather struck Vicksburg. Porter was ready to respond, and she handled the stressful time with grace and ease. Her coordination of that disaster may have landed her the job of deputy director.

“We had a tornado in March of 2012,” she said. “John [Elfer, director of WCEMA] was actually on vacation out of the country, and I had never dealt with that.  I think what I was able to do showed everyone that I had what it takes to be deputy director.”

Porter said she remembers good and bad times at WCEMA, but one that will forever be with her is the South Delta Backwater Flood of 2019.

“It was stressful,” she said. “I always like to remain optimistic and look on the bright side of things, but it was worrisome.” 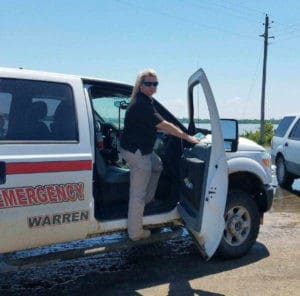 Porter was not only on the front lines coordinating emergency response for that area during the flood,  but she was also taking a boat to her home, as her house was on the brink of being flooded.

“I was worried about my house but still had to come to work every day because all this is also happening to my neighbors and friends in the county,” Porter said. “I knew I had to keep them safe, but it really took a toll on me.”

More than 550,000 acres flooded in the South Delta, damaging farm land, homes and leaving wildlife stranded and starving. Porter’s husband is a farmer and has not worked in 14 months due to backwater flooding.

“It’s nerve wracking to go to sleep knowing a levee is the only thing holding water back to keep your home safe,” Porter said. “It was just stressful 24/7.”

Still, the 44-year-old loves her job at WCEMA and is never afraid of the task at hand.

“We wear many hats,” she said. “You can go from not doing anything to 10 seconds later, you are really, really busy. We deal with everything from barge strikes, floods, storms, natural material left on the interstate after a wreck, to large fires and more.”

Porter also works closely with organizations such as the American Red Cross and United Way of West Central Mississippi to coordinate disaster responses to events such as flood and fire relief. In January, for example, WCEMA responded with Warren County Volunteer Fire Departments to the Landings Apartment Complex fire.

Porter says disasters do not come on a schedule, and no day is ever the same.

“It can be a beautiful day, but then something can happen and turn it all the way around,” she said.

In response to COVID-19, Porter said WCEMA has been coordinating with state agencies to get medical supplies to Warren County health-care workers and also coordinated the one day drive-thru  COVID-19 testing site in Vicksburg March 31.

To cope with stress, Porter has picked up painting in her spare time, and she never loses faith.

“I am a Christian,” Porter said, “so praying has helped me with stress.”

Above all else, Porter will never lose her drive to serve others.

“I’m passionate about helping everyone in this community,” she said.