For 25 years, Officer Joseph Bell has devoted his life to keeping his community safe.

Bell is the school resource officer at Warren Central High School where there are over 1,400 students and more than 125 staff members.

“Every day, I have to push my problems to the side and deal with these students and staff members’ needs and keep them safe,” Bell said.

His passion is to ensure the safety of all children, and it has pushed him to go above and beyond the call of duty. In 2010, Bell became a certified police officer through the National Association of School Resource Officers. The national certification took place in Nashville, Tenn.

“It happened during a time we were having a lot of school shootings and other safety issues in our schools,” Bell said, “and I said, ‘I need to step up and do something.’”

The experience taught him how to be a better officer and to keep the students of the Vicksburg Warren School District a high priority. Bell said had one of the best teaching him the ropes.

“At 22, 23 years old, I was bouncing from job to job and really looking for a career, and my brother-in-law, Randy Naylor, actually suggested to me to pursue law enforcement,” Bell said.

Naylor, who passed away from cancer in 2013 at 60 years old, had roots that ran deep in Vicksburg especially at the Vicksburg Police Department. He is best known for how he bridged the gap between the children and the elderly. Officer Bell shares this same drive.

“Randy used his wit, his know-how, and his community policing to solve a lot of crimes and problems in this community,” Bell said.

Bell carries what Naylor taught him every day into the schools.

Officer Bell admits growing up was tough for him as he was two years behind in high school, but he was determined to not fail. It is a determination that he passes down to high school students today.

“Failure is not a word that we’re going to use,” he said. “I push my kids at Warren Central every day.”

Bell, who is 46 and married with two children, says a day in the life of a school resource officer can be a challenge, but he is ready for any challenge thrown his way. 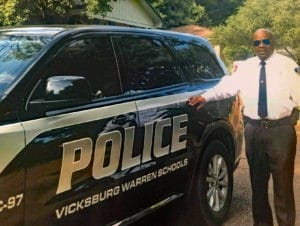 “You’re a counselor, principal, mother, father and coach,” he said. “You’re all that in one every day for so many students.”

Officer Bell believes it is his duty to always uplift the students he encounters.

“We have to encourage those kids to do the right thing,” he said, “and let them know there’s a brighter future ahead.”

In the recent spread of COVID-19, the schools may be closed, but for this Vicksburg Warren School District employee, his job never stops.

The district does a wonderful job of making sure every student has two free meals to eat while they are at school, but some students do not eat until they return to school. One out of four children in Warren County does not know where their next meal will come from. With schools being closed, the school district made a decision to deliver meals to students Monday through Friday while the children are out of school due to the coronavirus. Officer Bell made it his mission to assist with the delivery of meals.

“I decided to deliver the meals just to see the smiles on kids’ faces,” he said. “I also knew some of the areas were a hot spot for crime. I wanted to show the kids that law enforcement cares for them also.”

Bell drove the streets delivering the meals with his lights shining and siren blaring as he yelled, “Come get your meals compliments of the Vicksburg Warren School District” from his car’s megaphone.

“The kids were elbow bumping me and saying, ‘Thank you officer bell, thank you, thank you.’”

Bell also patrolled the areas making sure traffic slowed down as children were running in the streets to get their meals.

“The kids don’t have a lot to do because of the crisis,” Bell said, “but we want to make sure they are safe and fed.”