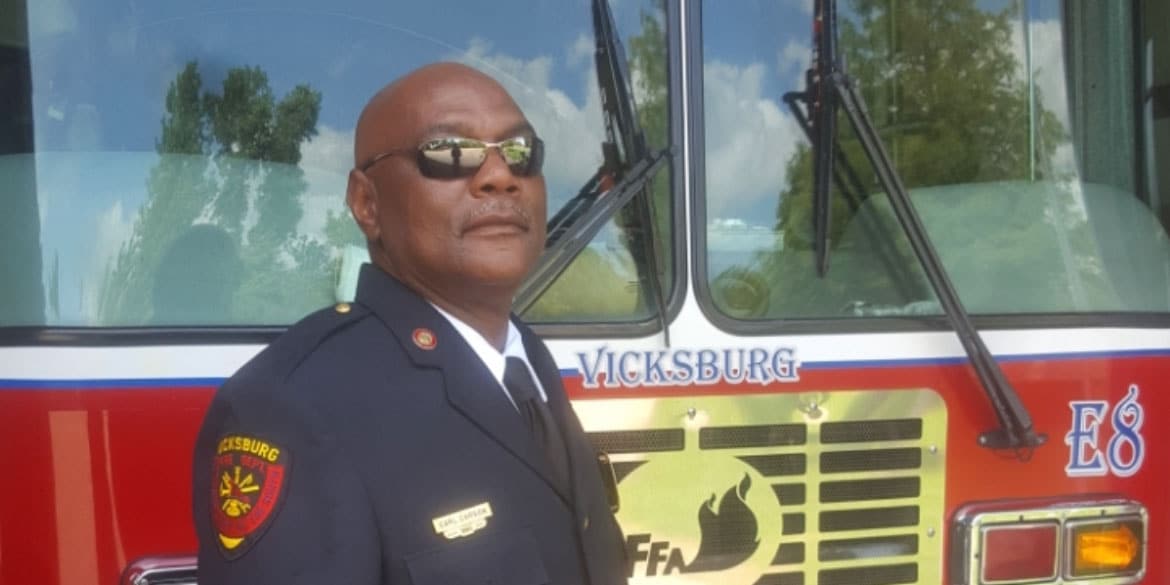 Back in 1990, a close friend talked Carl Carson into joining the Vicksburg Fire Department. Thirty years later, Carson is still at the department and loving every minute of it.

“I had no idea I would be here this long, but once I got into the service, the love of people kept me here,” he said.

Carson is a people person, and he believes he was put on this Earth to help people.

“Being able to be there for people in their most vulnerable time really has been the drive in my career,” he said.

The Utica, Mississippi, native comes from a large family who taught him to be there for one another during hard times. He believes his upbringing played a part in him enjoying his career.

Carson is the battalion commander for the Vicksburg Fire Department. In his three-decade career, he has felt the most success when he was serving his community, and he does not need a spotlight to do so.

“I don’t need the front row,” he said. “I’m more of the silent helper. I do my job to the best of my ability. I’m honest and treat everyone equally and fair.”

Carson has been married to his college sweetheart since 1986 and the couple have two adult sons, three granddaughters and one grandson.

His family understands and accepts the career path he has chosen, but it hasn’t always been easy on family life.

“I’ve sacrificed a lot of Christmases, holidays, birthdays, and ballgames to do what I do,” Carson said. “Even though I miss out on something, my heart is always right there with them. My family has always known I love them and love what I do.” 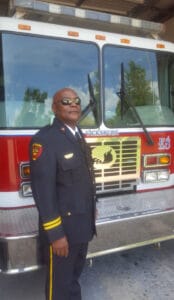 Carson’s love for public service evidently rubbed off onto his family because one of his sons is a police officer with the Vicksburg Police Department.

The fire department never closes. The men and women at the Vicksburg Fire Department stand ready to serve the community at a moment’s notice without regard to holidays.

“My mom has a picture of my entire family — all of my siblings, their spouses, my children, my nieces, nephews, cousins — and I am the only person not in this particular photo because I had to work on Christmas Day,” Carson said. “I often tell that story and feel that moment of not being there, but I knew, and family knew, I would have to sacrifice moments like that.”

Carson laughed and said he has often thought about photoshopping himself into the picture.

“The men and women I work with are my family away from family,” he said. “We watch each other’s kids grow up, and our families know each other.”

It is a bond like no other. Fighting fires is a life-saving act that cannot be done alone.

“We are one big family,” Carson said. “We are a team. I would put my life on the line for them, and I know they would do the same for me. It doesn’t matter their race, gender, age or rank. We are all out there trying to do a job and do it safely.”

“Anytime you deal with your own family members or anyone you know is hard and it really touches you,” he said.

Carson said he goes above and beyond for everyone, but when he knows the person, he feels extra pressure to be his very best.

Three decades have passed and Carson is still with the Vicksburg Fire Department and has not announced any particular date to break out the golf clubs and retire, but he has some thoughts of what he will do when that day arrives.

“When that comes, I can’t wait to spend time with my wife, kids and grandkids,” he said. “They are my inspiration.”

Although retirement is on the horizon, the people of Vicksburg still need Carson. His passion for the community is unwavering, and his love for people runs deep.

“People, people, people, people — that’s just what it’s about,” Carson said. “Even though my job deals with people when they’re in distress, I try to bring so much love and joy to them and put a smile on their face during a devastating time. It really goes a long way.

“This is so much more than a job. It goes beyond the job.”