'This is a war zone.' Gang violence has permeated Mississippi prisons 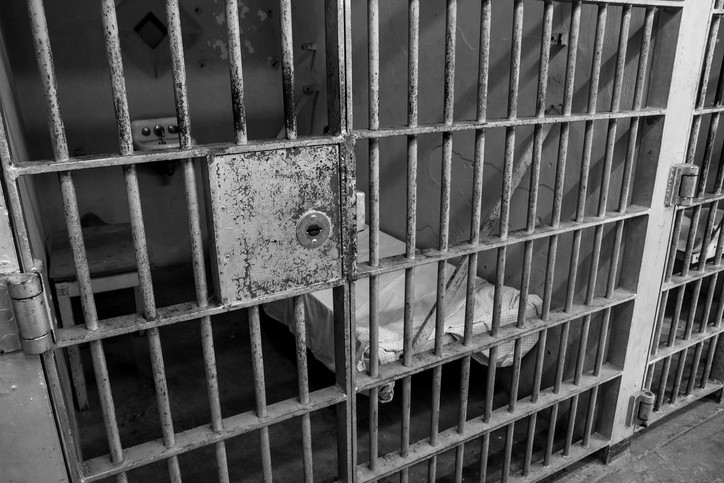 Conflicting reports of a man who allegedly escaped from Parchman Saturday are a demonstration of the chaos that has enveloped Mississippi prisons in the past week. Either Deaunte Lewis escaped and was recaptured, was on the grounds and simply missed in a count when he wasn’t properly transferred, or he was hiding out in the ceiling waiting for a chance to escape—or maybe just stay safe.

Our calls to the Mississippi Department of Corrections, to the prison at Parchman and to the Sheriff of Sunflower County have not been returned.

Since Sunday, Dec. 29, five inmates have died, and numerous others have been wounded in what MDOC says “may” be gang-related violence. Then, on Saturday, two inmates escaped from Parchman and a third, Lewis, may have escaped 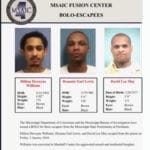 A notice to be on the lookout for three Parchman escapees.

“There is a lot of misinformation fanning the flames of fear in the community at large, especially on social media,” Commissioner Pelice Hall said in a statement Friday.

“I understand the public’s right and need to know,” Hall continued. “But my department will not rush to release information for the sake of perpetuating rumors. Contrary to what is being said, we are providing information. There is a process to releasing accurate information and that takes time.”

On Saturday, Gov. Phil Bryant tweeted that “DPS and MBI officers have been responding to restore order and apprehend the two escapees. I have directed the use of all necessary assets and personnel to achieve this result. Over 500 inmates have been moved to a more secure detention and a general lockdown continues.”

The Mississippi Department of Public Safety said Saturday that multiple agencies under MDPS are assisting MDOC with the situation in the Mississippi prisons. 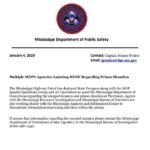 The Mississippi Highway Patrol has deployed troopers along with its Special Operations group and Air Operations to help MDOC locate the two escaped prisoners (one was captured Sunday morning). In addition, the statement says that the Mississippi bureaus of Investigation and Narcotics are “working closely” with the state Analysis and Information Center to “disseminate information concerning activities within the prison.”

So, it’s clear that this is a very big problem in Mississippi prisons, but what’s really going on?

Heather Burton, the coroner of Sunflower County, summed it up this way: “Gangs are at war,” she told the Clarion Ledger.

In Mississippi, two gangs are at each other’s throats causing a lot of trouble right now, reports Therese Apel with WLBT: The Vice Lords and the Gangster Disciples.

Apel has been reporting on gang violence since 2015 in Mississippi and has extensive knowledge of the numbers and workings of gangs in the state.

“Yesterday and today have shaken me,” she said live on Facebook, while describing a few of the gruesome photos and incidents she has seen recently. We’ve seen them, too. 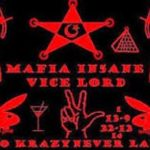 “Gang members are in all levels of society right now,” Apel added, not just in prisons, and the gangs consist of all races, genders and ethnic groups; most are mixed, even when the gang name denotes a racial group, such as Latin Kings. The violence is neither political nor deserved by those who are getting “slaughtered,” she said.

On Friday, Apel published a story featuring Jimmy Anthony of the Mississippi Association of Gang Investigators.

MAGI warned state officials that this day was coming in Mississippi prisons.

“This is reality. It’s happening today. It’s been building for about three years, and we’ve talked about it, we’ve tried to share it,” Anthony told Apel. “This is not kids playing basketball on the street corner. This is a multi-billion-dollar narcotics business.”

The gangs are working with organized crime organizations in Chicago who are calling the shots—they’re plugged in, Anthony said.

“Any major moves must be approved by Chicago because they have that plug,” Anthony said. “But by having that plug, it also gives them backup.”

Apel said that much of the deadly violence in Jackson and other Mississippi cities are caused by gang feuds, even when local law enforcement won’t or can’t acknowledge that fact. Cities like Jackson sit at the crossroads of major interstate traffic to all points on the compass, providing easy access to gangs trafficking drugs.

Our sources, who wish to remain anonymous for fear of reprisals, and MAGI informants are saying prison guards are giving keys to some inmates that allow them to attack other inmates. In other words, the guards are taking sides in the war.

The gang war is exacerbated by the fact that Mississippi prisons are woefully understaffed. The numbers of guards are less than half what they should be, the result of a combination of dangerous working conditions and underfunding. Starting salary for a guard is around $25,000, which mean about $1,700 in take home pay every month if you’re single.

As one of our sources indicated, guards can make more by supplying contraband such as cell phones to prisoners than the State of Mississippi is paying them.

The staffing situation is not new. A year ago, on Jan. 25, 2019, MDOC put the South Mississippi Correctional Institution in Leakesville on lockdown because of the severe shortage. At that time, Commissioner Hall indicated MDOC was in a “pressure cooker” situation with 671 unfilled security jobs.

The prison in Leakesvillle has a prisoner-to-guard ratio of 23 to 1, much higher than other states or the federal prison system, wrote Jerry Mitchell in his story about the prison in August. Green County Herald editor Russell Turner called the facility “a ticking time bomb.”

Mitchell wrote of numerous incidences of prisoners being beaten or burned while guards turned blind eyes and deaf ears to cries for help.

If the gangs start to battle, a former inmate told Mitchell, “the officers just let it go, because there’s not enough of them.”

The gangs control every aspect of prison life, Mitchell wrote, from where a new prisoner will sleep to collecting fines for using wall phones, taking showers and not sharing their food. They also might intercept any grievances filed, punishing those who dare complain with beatings or scalding water.

Reports the Vicksburg Daily News have received from prisoners inside Parchman in the last few days bear out the worst accusations made about Mississippi prisons in published stories—and far worse.

“The press isn’t telling the full story on what’s going on with the statewide prison lockdown,” a source, who wishes to remain anonymous, told us, sending us photos that we will not publish because we can’t verify their authenticity. (Even if we could verify them, we might not publish them due to their brutality.)

“Real talk this is a war zone in here right now,” an inmate wrote, saying the death toll is much higher than what MDOC is saying, though we have no way to verify that claim. Reportedly, the prison infirmary at Parchman is overwhelmed due to the high numbers of injuries.

Families are in fear for the lives of loved ones incarcerated.

“I am trying to find out if my brother is SAFE. Or at least alive!” a family member posted on Facebook. “He is in PARCHMAN! Last known location was UNIT 30.”

Jerome Mitchell (no known relation to reporter Jerry Mitchell) spoke with WJTV Friday after learning that his son had been stabbed 10 times in Parchman’s Unit 29.

“I’m very concerned, and I know other families are, too,” he said. “And we’re not getting no answers from MDOC. They’re covering everything up and hiding.”

Mississippi’s prison population in 2018 was more than 19,000 individuals, with another 10,000 in local jails and federal prisons, according to the Prison Policy Initiative, a Massachusetts-based think tank and advocacy organization. The state’s prison incarceration rate, at 624 per 100,000 residents, is the third highest in the nation—only Oklahoma and Louisiana have higher rates. The rates are skewed disproportionately toward Hispanics and African Americans.

The cost of maintaining those prisoners is around $330 million annually, an increase of 170 percent since the 1980s.

Cil and Charles Riles to retire