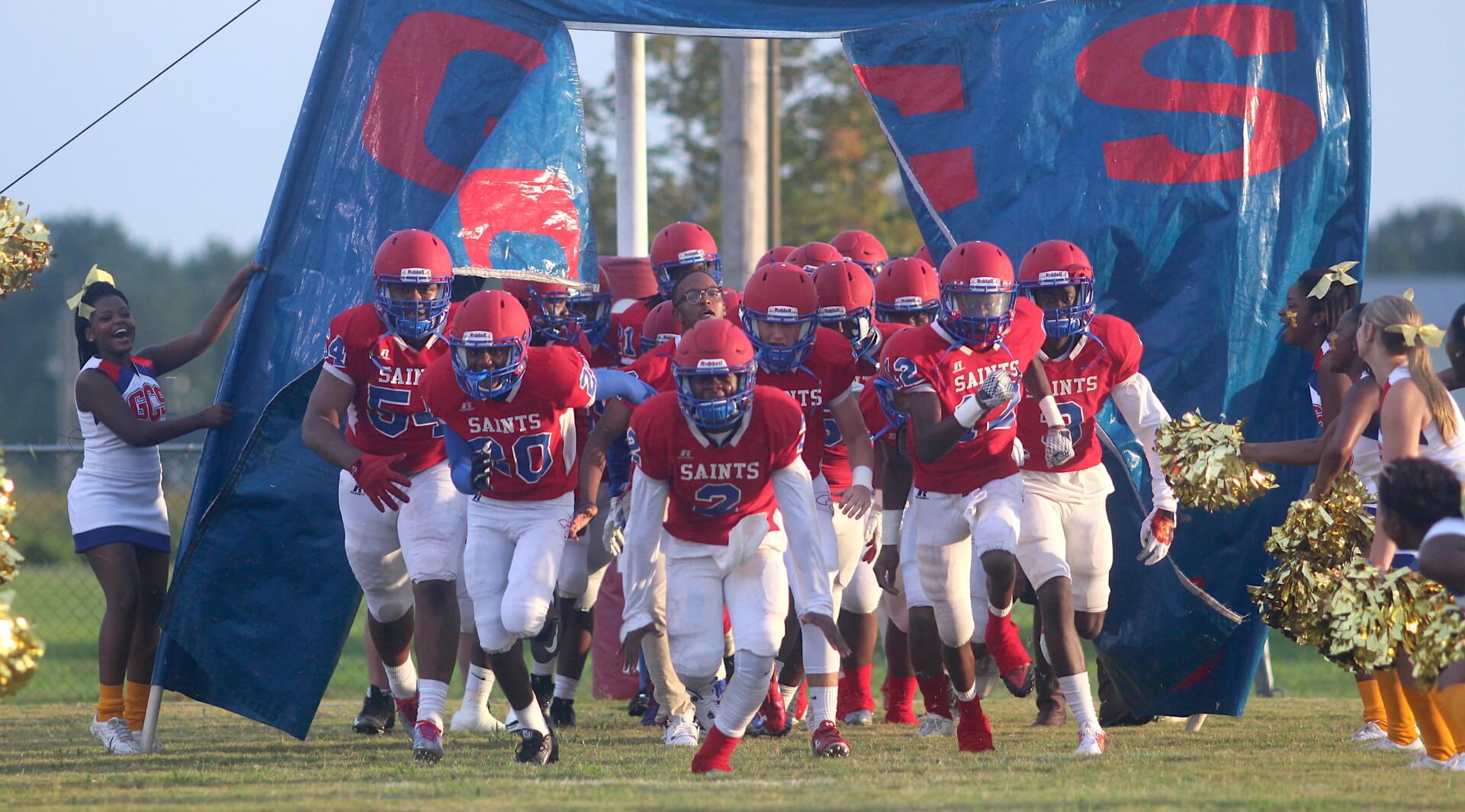 GREENVILLE — Little more than a half century ago, Mississippi’s public high schools, forced by federal law, integrated. Private schools, including Greenville Christian School, sprang up all over the state. You know why. White parents didn’t want their children to go to school — or play sports — with Black children.

A new, then-strictly segregated sports league was formed. The Mississippi Private School Association (MPSA) has since become the Mid-South Association of Independent Schools (MAIS). And now, five decades later, the best football team in the league — and perhaps the best in the league’s history — is Greenville Christian, an all-Black team.

With just 35 players on the roster and training in spartan facilities, the Greenville Christian Saints opened this season on the road with a 58-32 trouncing of Madison-Ridgeland Academy, two-time defending MAIS 6A state champions. A week later, the Saints returned to the Jackson area and ransacked traditional academy powerhouse Jackson Prep 48-13. It was the worst home defeat in Prep history. Last Friday night, Greenville Christian clobbered J.Z. George High School of North Carrollton, a Class 2A public school, 58-0.

In three games, all on the road, the Saints have out-scored foes 164-45. Uber-talented quarterback D.J. Smith has thrown for 1,063 yards and 12 touchdowns. Wide receiver Chris Bell, a Southern Miss commitment, has snagged 14 of those throws for 357 yards and six touchdowns and also returned a punt for a score. Cornerback J Elam, a Mississippi State commitment, has intercepted four passes and returned a punt for a touchdown. Marlon Palmer, a muscular fireplug of a running back, has rambled for 241 yards and four touchdowns on just 29 carries.

“I guess we’ll find out soon enough,” says Greenville Christian’s 29-year-old head coach Jon Reed McLendon, who just 12 years ago played both ways on the line for Greenville Christian. “We just hope to go over there and represent our school and our state well.”

MRA’s Herbert Davis, one of the most highly respected coaches in Mississippi, believes they will. Davis says the Saints could compete for the Class 6A state championship in Mississippi’s public school league (MHSAA). Said Davis, “They’d be right there.”

If Greenville Christian’s story sounds far-fetched, you don’t know the half of it. Thirteen months ago, McLendon, the coach, wondered if he could even field a team. When Greenville Christian held its first summer practice in July of 2020, 10 prospective players showed up. When the Saints played their first game (a 27-0 loss to Tri-County Academy), they still had only 20 players, not enough to scrimmage in practice.

But then Greenville High School canceled the 2020 season because of COVID-19. McLendon received a phone call from Greenville quarterback Josh Martin, a junior who wanted to transfer. After meeting with McLendon, Martin did transfer. But he did more than that. He brought several teammates with him.

And those teammates reached out to friends in nearby Greenwood, whose high school wasn’t playing football either. Greenville Christian’s roster quickly grew. Smith, the talented quarterback, came from Greenwood. Martin moved to wide receiver. More players came, from Hollandale, from Greenville O’Bannon and even from Yazoo City.

“A lot of us grew up playing against each other,” Martin said. “Now, we’re playing together, almost like an all-star team.”

Since the opening shutout loss last August, the Saints have reeled off 14 straight victories, scoring 50 or more points eight times. They won the MAIS 2020 3A state championship with relative ease, out-scoring teams 122-33 in three playoff games. With most of that roster returning, including 21 seniors, McLendon scheduled much more formidable competition against much larger schools this season. The result? So far, so great. 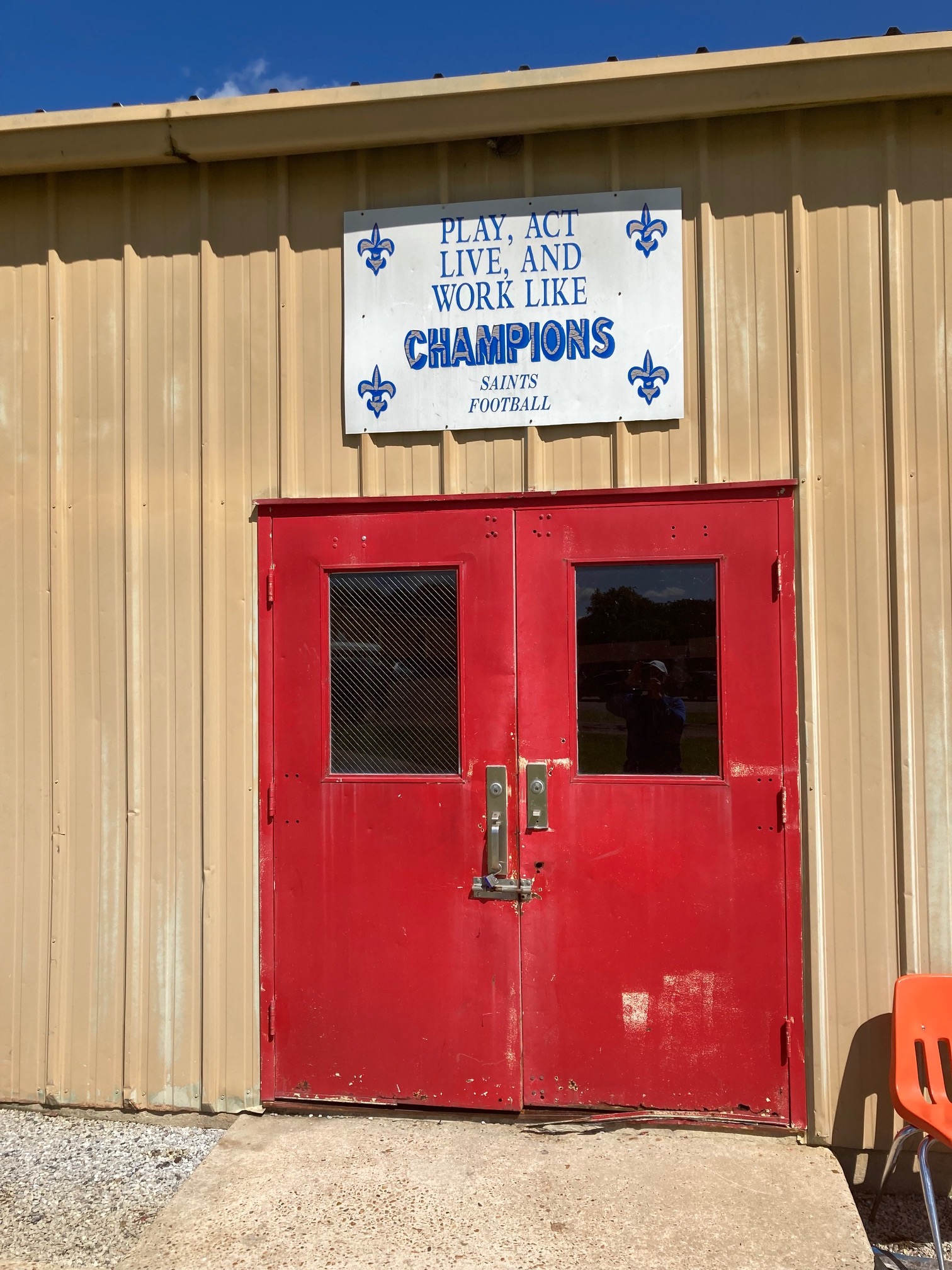 “Relationships is what brought these new players here,” McLendon says, and then adds, grinning, “Look around. It surely wasn’t the facilities.”

Know this: All those transfers did not come to Greenville Christian because of the facilities. The weight room is an humble, converted classroom building with two aging benches, two old squat racks and minimal weight equipment. The film room doubles as a history classroom, where the linemen squeeze into desk chairs scarcely big enough to hold them. The football field, converted farm land, has a few bleachers and a press box that looks as if it could hold four people, no more.

Normally, the Saints travel in an old bus, currently without air conditioning. They will charter a bus to Georgia.

“Relationships is what brought these new players here,” McLendon says, and then adds, grinning, “Look around. It surely wasn’t the facilities.”

The facilities do work in Greenville Christian’s favor in one way. When the Saints traveled to MRA and Prep, they got a first-hand look at what more modern and vastly more expensive equipment and facilities. Said Martin, the quarterback turned wide receiver, “That just fired us up even more.”

McLendon says he had a few Black classmates and teammates when he played for the Saints a little more than a decade ago. But the makeup of the school and the team hardly resembled what Greenville Christian has become: a private school that closely mirrors its community, about 75% African-American, he said.

Besides coaching football and baseball, McLendon teaches three Bible study classes and a physical education class. He is also the offensive coordinator, and when he isn’t teaching or coaching, he is the pastor of New Beginnings Fellowship (formerly Southside Baptist Church). His younger brother, Jordan, is the defensive coordinator and offensive line coach. Justin Leavy, another former Greenville Christian Saint, coaches receivers, coordinates special teams and handles the strength and conditioning program, making do — and then some — with the meager facilities.

Martavis Moore, a Greenville policeman, coaches the Saints defensive backs. Athletic director and head basketball coach Logan Collins also assists in football as a utility coach, says Jon Reed McLendon, “wherever we need him.” McLendon’s mother and sister also teach at the school. Says McLendon, “We are invested here. This is family. This is home.”

“Home” has become a football powerhouse. And with that have come more challenges. Tuesday brought the news that Northpoint Christian of Southaven, the Saints’ scheduled opponent for Sept. 17, has decided not to play the game. So Jon Reed McLendon used Twitter to broadcast the news that Greenville Christian now needs a game for that date. The first prospective opponent to reply? Defending MHSAA 6A state champion Oak Grove, that’s who.

Said McLendon, “Now that’s a phone conversation I never expected to have.”

One obvious Greenville Christian concern: depth. The Saints’ first 22 players and top substitutes could play for any high school in the state, which means they could play for any high school anywhere. Several will sign college and junior college scholarships. Depth, however, is shallow. Greenville Christian has no two-deep depth chart because there are only 35 players on the roster. Two or three key injuries would turn an extraordinary team into an ordinary team fairly quickly.

“We’ve been fortunate in that regard, all last season and this season,” McLendon said. “I give Coach Leavy a lot of credit for that because of his conditioning program. Knock on wood, that will continue.”

Meanwhile, here’s a question: Could anyone at Greenville Christian have dreamed this time last year that any of this would happen?

Jon Reed McLendon laughed at the question and answered with one of his own.

Perhaps a better question: Could anyone have dreamed anything like this 52 years ago when Greenville Christian and nearly all the other Mississippi private schools were created?

McLendon wasn’t alive then, but older Mississippians, regardless or race, surely can answer that one: No. Back then, this would not have seemed possible.

Click here for a link to live-stream the Greenville Christian vs. Collins Hill game on Sept. 3.