A third COVID-19 vaccine has been approved for use in the United Kingdom and is being given to residents there as of Monday. This vaccine was developed by the University of Oxford and AstraZeneca. It is reportedly cheaper and easier to store than either the Pfizer or Moderna vaccines; however, it has not proven to be as effective. While both Pfizer and Moderna were more than 90% effective in widespread testing, the AstraZeneca vaccine was 73% effective in clinical trials.

Although the company has not announced plans to apply for emergency use in the U.S., the news can’t be too far away.

As of Dec. 31, 20,033 Mississippians have been inoculated against COVID-19. During this first phase of vaccinations, the priority is health care workers, first responders, and residents and staff of long-term care facilities, the most vulnerable residents of the state.

About 4.2 million Americans have received the first dose of one of two COVID-19 vaccines, far short of the national goal of 20 million inoculated by the end of 2020. For information about vaccines and vaccine distribution in Mississippi, please visit the MSDH website.

The state reported 3,400 new cases to the Mississippi State Department of Health for Saturday and Sunday along with 45 deaths. Warren County reported 49 new cases and no deaths.

In the first four days of January, the state reported 7,866 new cases. The state’s seven-day average of new cases is about 2,227 per day with 15,588 new cases reported, nearly 20% higher than a month ago.

Warren County’s 14-day total of new cases is 564 with a daily average of 40.3 cases. The seven-day average is more than 46 a day, with 325 cases reported in the past seven days. The county is on the governor’s list of hot spots that include all but four of Mississippi’s 82 counties — Claiborne, Issaquena, Sharkey and Tunica — three of which neighbor Warren.

The huge number of cases means a corresponding rise in the number of hospitalizations in the state. Hospitalizations hit more than 1,450 patients last week. Hospitals across the state — including Merit Health River Region in Vicksburg — are reporting that no ICU beds are available for any seriously ill or injured person, not just COVID-19 patients.

State health officials expect cases, hospitalizations and deaths to go even higher this month after the Christmas and New Year holidays and are strongly urging Mississippians not to hold or attend any gatherings that include people not in their immediate families.

Nationally, the cumulative cases in the U.S. have soared to more than 20.6 million, with some sources putting the figure as high as 21.1 million. Numbers of new infections, hospitalizations and deaths continue to rise although the rate of new cases seems to be slowing slightly.

The number of people who have died in the U.S. since the beginning of the crisis is about 351,682.

At least 1,353 people died of the virus Sunday in the U.S., and at least 201,544 new cases were reported. Holiday closures with limited testing and uneven reporting likely contributed to the drop in new cases in the last 14 days, about 1%. The rate of deaths remains flat for the past two weeks; however, the number of people hospitalized across the nation continues to rise. About 125,500 people were in the hospital Sunday for COVID-19, an increase of 10% in the past two weeks.

Internationally, 33 countries have now seen the COVID-19 variant first reported in the U.K. Dec. 8. In the U.S., three states — Colorado, California and Florida — have seen cases. The variant is more contagious by about half but does not appear to be more severe or deadly.

In Warren County, MSDH reported 30 new COVID-19 cases Sunday and 19 cases Monday. No new deaths were reported either day. The cumulative number of cases in Warren County to date is 2,891, and the county’s death toll is 79. The seven-day average of new cases in the county is 46.4 per day, more than double the average cases of a month ago.

Statewide, MSDH reported 1,784 new COVID-19 cases Sunday and 1,616 cases Monday, bringing the total cumulative confirmed cases in Mississippi to 223,677. The seven-day average of new cases is 2,227 per day, about 19% higher than the seven-day average a month ago. In January, the age group reporting the most cases in Mississippi are from 25 to 39 years old followed by those 50 to 64 years old.

Deaths are a lagging indicator. The current surge began in Mississippi in late October, and the state saw record deaths in December, with 85 reported Dec. 29. November and December case numbers exceeded cases reported in July at the peak of last summer’s surge. December’s death toll exceeded August’s by 167 Mississippians.

Of the 32 deaths MSDH reported Sunday, four occurred between Dec. 14 and Jan. 2 in the following counties:

An additional 28 COVID-19 related deaths occurred between Nov. 7 and Dec. 28 and were identified from death certificate reports.

An additional 10 COVID-19 related deaths occurred between Dec. 6 and Dec. 28 and were identified from death certificate reports.

New cases and deaths were reported to MSDH as of 6 p.m. Saturday, Jan. 2, and Sunday, Jan. 3. MSDH usually reports statistics on the COVID-19 coronavirus each day based on the previous day’s and death reports. 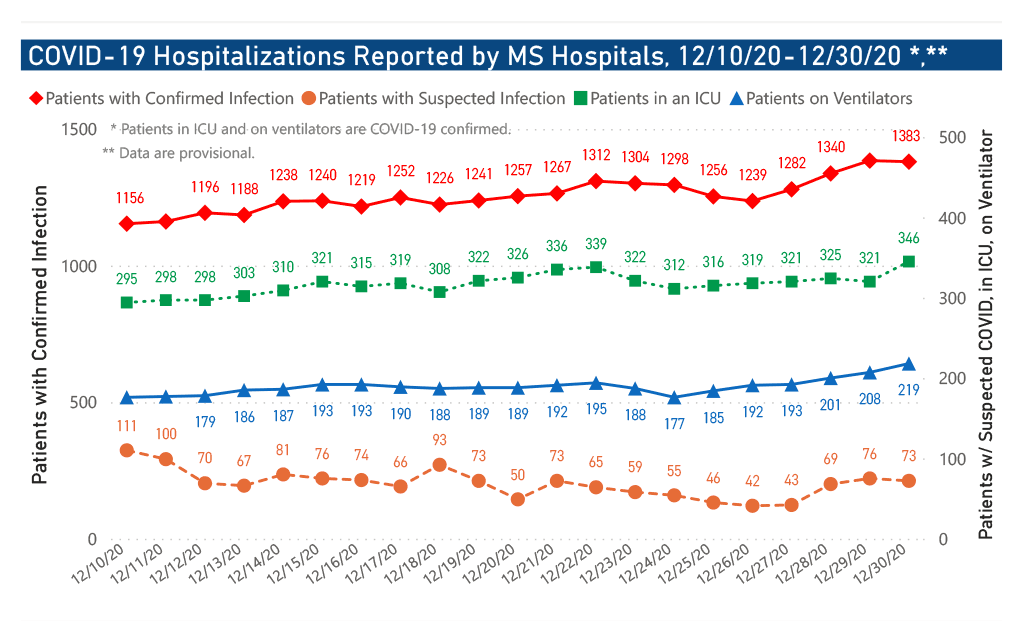 MSDH has estimated the number of people who can be presumed recovered from COVID-19 in Mississippi. That number is 182,103 through Sunday, Jan. 3. It represents about 81.4% of the cumulative 223,677 cases reported as of Monday, Jan. 4.

The total number of Mississippians tested for COVID-19 (PCR and antigen tests identifying current infections) as of Saturday, Dec. 19, is 1,669,558 or about 56.1% of the state’s 2.976 million residents. MSDH reports statewide test results about once a week but is having technical difficulties with reporting its testing data. Without daily updated numbers of tests, it is impossible to accurately calculate Mississippi’s positivity rate (positive results to tests, seven-day average); however, the estimated rate was 20.1% Sunday, Dec. 27, according to Johns Hopkins University. The national rate was 13.5% Sunday, and 5% or lower indicates adequate testing.