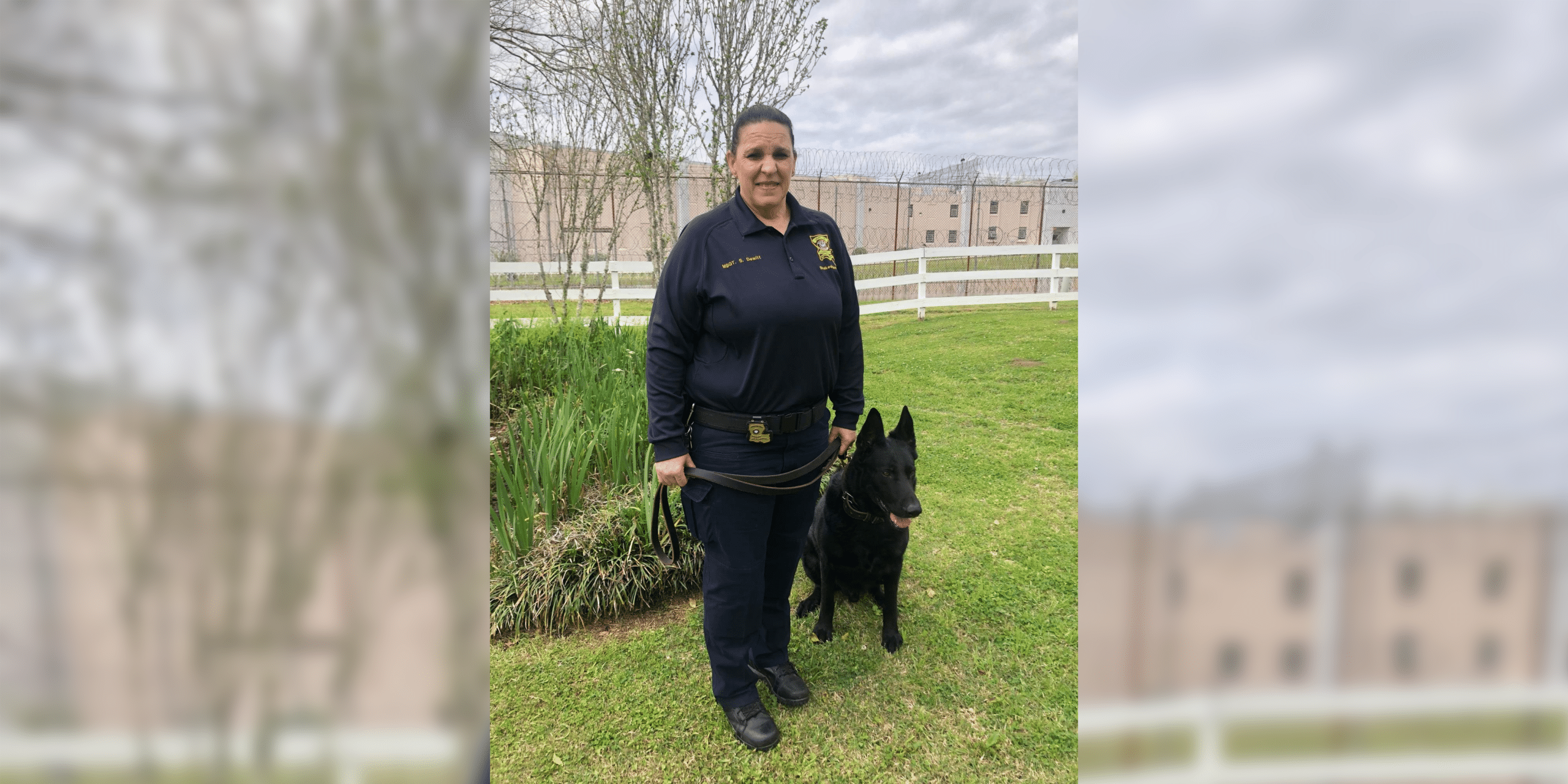 Recently, the Angola Museum gave MSgt. Sheri Dewitt a platform in which she shared the path it took to get from where she was, a girl from a small town in northeastern Louisiana, to a respected member of the Angola Shakedown Crew and Narcotic Dog Handler.

After spending some time working for the Tallulah Correctional Center for Youth (TCCY), an instructor came and discussed the pay and benefits that would be offered at Angola. Tallulah, being a small town, didn’t have many opportunities. Sheri decided to start working there in May of 1999.

This was the first time she lived away from her hometown, uncertainty and hesitation were commonplace, but eventually she arrived at Angola and started the training academy.

“I had never left outside of my hometown before and was very hesitant on leaving.”

Dewitt almost quit during her last week. A terrifying walk caused her to call her mother and state she was going to come back home. Her mother was vigilant in expressing the opportunities and benefits that would be provided by Angola. Dewitt was not raised to be a quitter.

Her career started at Camp D. After a short while, Dewitt wanted to learn and take on more responsibility. The Shakedown Crew caught her eye and she began to track down who she would need to talk to in order to apply for the unit. One day, Col. Johnny Bert Dixon spoke with her and mentioned that a new position would be opening up at the front gate visiting shed. There was to be a narcotic dog detection booth. Dewitt got very excited, feeling that all her goals were finally within reach.

“I can remember my heart was pumping out of my chest with excitement. I was going to be working both jobs that I so wanted and desired. My dreams were coming true.”

When she made her first bust at the Front Gate visiting shed with the Narcotic Dog, the excitement and adrenaline began to flow. She was proud of the accomplishment of catching her first drug smuggler.

Dewitt regards the Shakedown Team and Dog Handlers as a family consisting of elite professionals. “We have each other’s back and support each other. It is not an easy job by any means, and it is not for everyone. You kinda have to have thick skin being a female, but I wouldn’t have chosen any other job. I strive to do better every day and to learn more. Contraband comes in the prison in different ways, so it keeps us on our toes and it’s never a dull moment. ”

Sheri Dewitt is thankful and humbled for the opportunity she was given, made possible by her family, friends and co-workers at Angola.

“I thank God for leading me to the career he’s blessed me with and the people that I work with. I don’t take my job for granted and the knowledge I was taught. I take pride in my job and hope we set an example for other employees. I feel Angola brought a small-town country girl driving an old Oldsmobile with maypop tires with wires hanging out to a more stable and productive life. I would encourage anyone to take advantage of the training, benefits and opportunities provided by Angola and start a new career.”

My name is Sheri Dewitt. I am a MSgt. on Angola’s Shakedown Crew as well as a Narcotic Dog Handler. I’m originally from…

John and his grocery celebrate their 90th