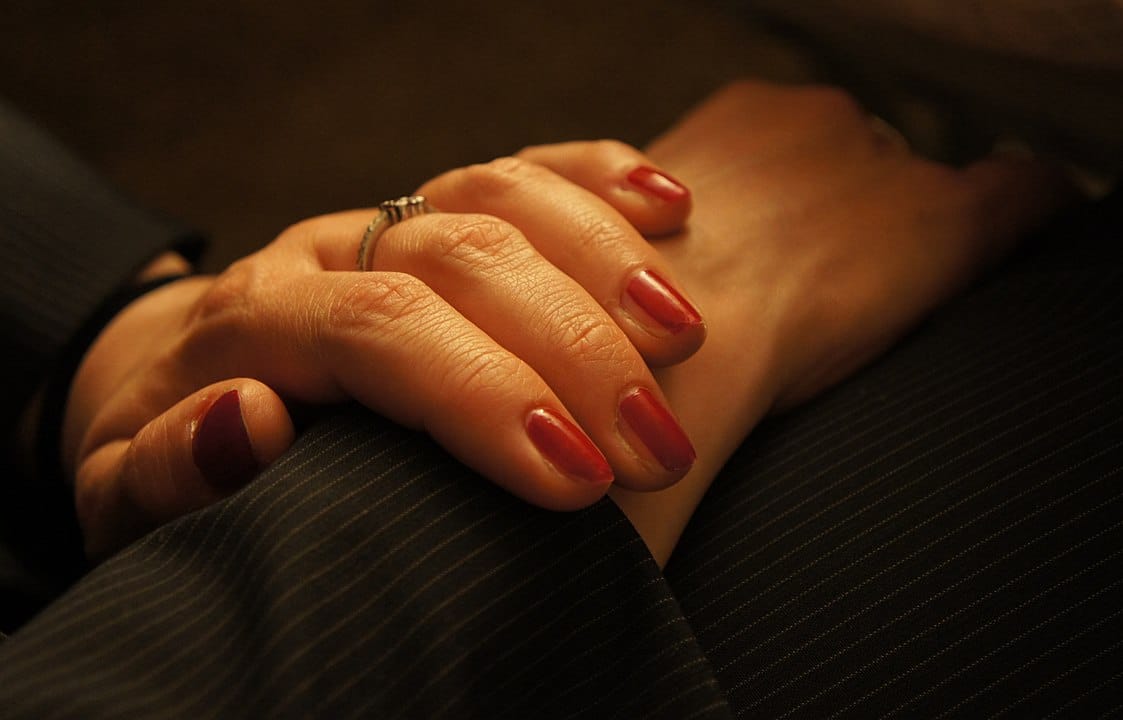 Editor’s note: Gordon Cotton wrote fondly about the “affects several women other than my mother, aunt and grandmother have had on my life … in no particular order” in March for Women’s History Month. Like so much else, the story was delayed because of COVID-19. The Vicksburg Daily News is happy to bring the piece to you now.

“Have you prayed about this?” Miss Eva asked me.

I had gone to a longtime family friend, Mrs. Eva Davis, with a problem. I always trusted Miss Eva’s opinion. I knew she was lady who could get things done. The Old Court House Museum is a prime example.

Miss Eva was a Whitaker who grew up in the Redbone community. She wasn’t well-educated as far as school goes, but she was plenty smart. When the Old Court House was abandoned for the new one in 1940, she began a campaign to save the old building and turn it into a museum. Only one member of the board of supervisors, J.H. Henderson, was on her side. He told me she came to the meetings of the board, telling them of her idea.

Miss Eva had no money, no training, was not one with great community influence, and she had a 10th grade education.

It has been a long two months!

My visit with her that day in 1965 was because my father had a severe heart attack, and Dr. Benson Martin told me I had to come home, that my folks seriously needed me. I was teaching at Holmes Junior College in Goodman, and it was the end of the summer school session. I didn’t know what to do.

Miss Eva did. She prayed about my plight, and she started right then.

I walked out of the Old Court House and got to the Cherry Street steps, when someone from across the street called me. It was Othel Mendrop.

“We’re opening a new high school in two weeks,” he said, “and I need someone to teach American history.”

There was no doubt in my mind that Miss Eva had a direct line to God.

“Why don’t you go to see Lois Weeks?” Courtney Blossman asked me. “She saved my life.”

Courtney and I were having supper at Walnut Hills — that was about 15 years ago, maybe more. She explained that it would be a few months before I could get an appointment, but she gave me Lois’ phone number.

I was having some severe leg problems and had been told by several medical doctors I would always have the problem. One more opinion couldn’t hurt, so I called Lois, who lived in Tylertown, and was told I could see her the next day as someone had just canceled.

Lois practiced herbal medicine and was what is called a naturopathic physician. She had several degrees but told me she learned more from her grandmother than she ever did in school.

Long story short: Within two weeks my problem was gone, and I’ve never had that ailment again. By the way, on that same visit Lois told me to take echinacea every day to support my immune system. The result: I haven’t had a cold in 15 years though the Food and Drug Administration says it is of no value.

I continued to see Lois over the years for any other health problem that might come along. A friend called Lois my “voodoo queen,” so on my last visit I took her along. Lois told me I had a blood circulation problem in my lower legs and suggested some herbs to cure it.

My friend was impressed but insisted I see a “real doctor,” so I  got an appointment at Sports Medicine where the real doctor told me it was a blood circulation problem in my lower legs — and charged me three times as much.

During Thanksgiving week last year Lois, who was never sick, did not wake up. She was 92.

I’m afraid she’s bored in heaven. There is no one to cure.

“You’ll learn more from Mary Cain in one summer than you will all year at Ole Miss,” Charlie Faulk advised me.

That was in 1954. I had graduated from Jett High School and wanted to go to Ole Miss and major in Journalism. A family friend, Mary Dawson Cain, of Summit. who edited the weekly newspaper there, made me an offer: Come to Summit, work part time at The Summit Sun and go to the local junior college, Southwest.

I was in a quandary, so I went to see my mentor and kinsman at the Post. I took his advice.

The Cains — they became Aunt Mary and Uncle John — practically adopted me. In fact, one night when I was taking mother to Alabama to see her sisters, I remembered that Aunt Mary was speaking at Lake High School, so we stopped. As Aunt Mary was speaking, she suddenly exclaimed, “Ladies and gentlemen, my son and his mother are here.”

Aunt Mary was a woman of boundless energy. She published the paper, taught Sunday school, sang in the church choir, participated in hometown events, and made speeches all over the state and country.

Her claim to fame was that she refused to pay Social Security taxes on herself as it was forced government insurance. The amount owed was only a little over $41, but it was the principle. An IRS agent bored a hole through the newspaper office door, put a chain through, and padlocked the building. Aunt Mary solved that problem with a hacksaw. 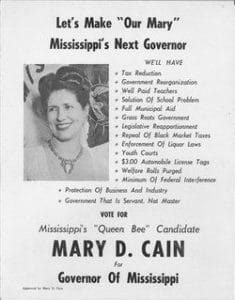 She ran for governor against several male opponents in 1951 and again in 1955. She crisscrossed the state in that maroon Buick Roadmaster, speaking at just about every crossroads. In November, she made a good showing — fourth place once, I believe.

She was the first woman to seek the governor’s office in Mississippi.

She was surprised and honored when a national magazine polled the 48 governors about the possibility of a woman vice president of the country, and the governor of Utah, J. Bracken Lee, said his choice was Mary Cain.

Aunt Mary wasn’t afraid to do battle if she thought she was right. She defied the Roosevelt administration when FDR tried to buy support of weekly editors. It was a national contest that she led and won.

On·the state level she locked horns with the attorney general, J.P. Coleman and won on a matter concerning principles. She was fair in local matters, and in the newspaper always gave her black readers courtesy titles, such as Mr. and Mrs., which usually. wasn’t done in state newspapers.

Aunt Mary had a quick wit and sometimes a sharp tongue. When Bill Waller defeated Charlie Sullivan for governor in 1971, she observed, “Every four years Mississippians take an IQ test — and fails.”

She was physically beautiful. In life she was a Christian first, then a conservative. How she accomplished so much in everyday life is best explained in her favorite scripture, Isiah 28-31, especially in that last verse: “But they that wait upon the Lord shall renew their strength; they shall mount up with wings like eagles; they shall run, and not be weary; and they shall walk, and not faint.”

Charlie Faulk’s advice was about the best I’ve ever had.

During one of Dr. Martha Bigelow’s lectures in history class at Mississippi College it was said if one dropped his pencil, by the time he picked it up, he was at least 200 years behind.

Dr. Bigelow, who grew up in Alabama, was head of the history department at MC. She spoke rapidly and without notes. History can be a dull subject, but she brought it alive.

After earning my bachelor’s degree, she talked me into pursuing a master’s, explaining that I would only take history classes, none of that dull and boring stuff like math and science.

I guess the greatest tribute to her was when we guys got together after one year of teaching and all realized we had tried to emulate her classroom style. Oh, to be able to teach like Dr. Bigelow!

Politically, I’ve always been very conservative, and she was very liberal, which made conversations more interesting. The last time I saw her was when she came to a book-signing at the bookstore in Clinton.

She was not aware that I had dedicated the book to her.

After the signing, she invited me to her home for a glass of wine and conversation. She asked me who I was backing for president, and I said, “You ought to know — Dr. Ron Paul. Who are you supporting?”

She said I might be surprised, but she, too, was for Ron P ul, the Libertarian candidate. Had she changed? No, she said, “but if you go so far to the right you come to the left, and vice versa. We have met.”

Martha Bigelow was a grand lady who had a positive effect on my life. I always strove to copy her in my teaching career.

In the fourth grade at Jeff Davis Academy, Miss Dorothy Hullum took us on an imaginary trip in geography to South America. My job was to report each day on the trip. That was my first venture into journalism. I owe a lot to Miss Dorothy.

I will always remember — and try to follow — the advice of Mrs. Joy Banks, a great friend and teacher who said, “Take control of your life, or your life will control you. Every now and then, you’ll need to stop and take control.”

Nine Ole Miss athletes under quarantine due to COVID-19