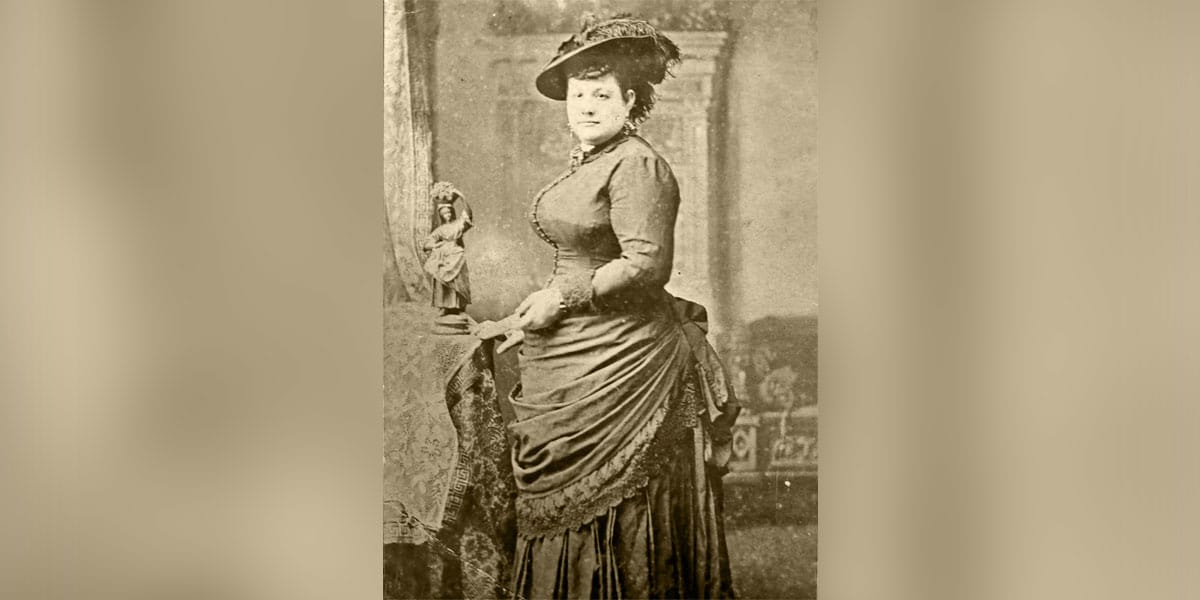 She told a tragic tale: Her name was Marie, and her husband had been a Union soldier who moved to Vicksburg and married her after the Civil War. He had been murdered by an unrepentant Rebel, shot down in cold blood just because he was a Yankee.

The woman and her three small children had moved to New Orleans. When the children grew up, she told them the story, and they repeated it from one generation to the next.

Wanting to know more of the family history, a lady and her college-age son came to the Old Court House Museum some years ago for genealogical research. They didn’t find what they expected. The lady was mortified, and her son laughed heartily, for the Vicksburg newspapers in 1884 told a different tale from what Marie had said.

The not-very-grieving widow had changed not only the facts but also her name. In Vicksburg she was Mary, not Marie, and according to the newspaper accounts, she was the cause of a double murder.

Joshua Bourne, who first came to Vicksburg as a captain in a Missouri Union regiment, came back after the war and married 14-year­-old Mary Maybin. During the carpetbagger rule he was elected chancery clerk of Warren County.

The other man in the triangle, James. T. Metzler, was born in Little Rock, Arkansas, but grew up in Vicksburg. He was a member of Swett’s Battery in Confederate service, performing with “marked gallantry and bravery.” He did not marry, lived at home and after the war was a riverboat pilot on the Mississippi.

The Bourne’s were having family problems, and Mary filed for divorce and moved out of the house. Joshua Bourne went to court, seeking custody of the children. It was rumored that Metzler was the cause of the separation, but he said he simply represented Mary Maybin Bourne as a business agent and that Joshua had been a brutal husband.

Both men went armed, and rumors were rampant that things would come to a head — and they did on Sept. 5, 1884, a Friday morning. Metzler was downtown chatting with a friend when Bourne approached, drew a pistol and opened fire just 5 feet away, the bullet penetrating Metzler’s bowels. He fled to the Famous Dry Goods Emporium nearby, Bourne in pursuit, pistol in hand, firing rapidly.

Metzler got behind a counter, managed to draw his pistol, and both fired until their guns were empty. Then they clutched one another in a death grip until bystanders separated them. Metzler had struck Bourne twice, wounding him above the heart and in the abdomen.

Clerks and customers screamed and fled in what the Herald described as “terrifically terrible” and “perfectly appalling.” Bourne was left on the floor as it was thought he would die any moment, and Metzler was removed by carriage to his parents’ house on Jackson Street. Bourne was later taken to the Madrid House, a hotel on Veto Street, but before that, lying in a pool of blood, he had asked to see a priest and his wife and children. Father Picherit and the two oldest children came, but Mrs. Bourne chose instead to go to the bedside of her supposed lover.

The Vicksburg Evening Post reported that it was a “pitiable and touching sight” to see the children and the priest kneeling beside the dying man. The scene at the Metzler house was equally tragic as his “gray-haired old parents” stood beside their mortally wounded son.

Both Bourne and Metzler died the day of the shooting. Their funerals were expensive, and both men were buried in Cedar Hill Cemetery. Mary Bourne paid for her husband’s funeral, but records don’t state whether or not she attended.

More than a century later, her descendants found out that family history isn’t necessarily what has been repeated, but stories such as that of Mary Bourne make it a lot more interesting.

Jeff and Marion Richardson own the

former Bourne home on Fort Hill Drive. If it were ever put on tour, what a story they could tell.