The ‘slow torture’ of the flood creates an activist 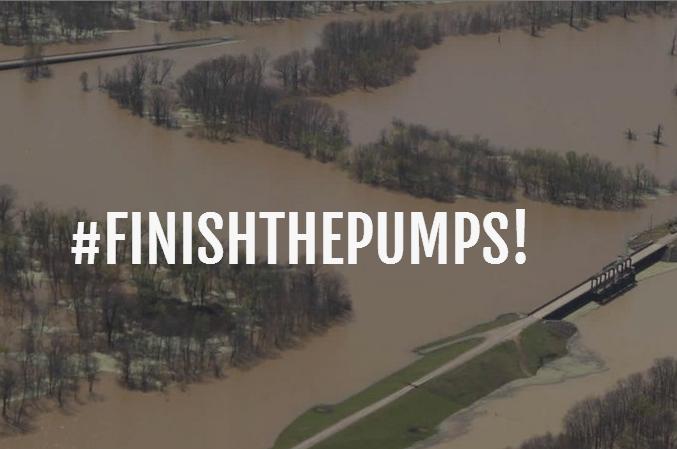 When Ann Turner Dahl retired in January 2018, the last thing she expected was a catastrophe the size and duration of the 2019 Yazoo Backwater Flood. 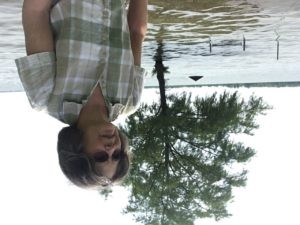 She probably didn’t expect to become a lay expert on the flood and the pumps’ controversy, much less an advocate for completing the pumps, but that’s exactly what has happened.

Dahl, who worked for many years at the Grand Gulf Nuclear Station, bought her dream home at Eagle Lake in June 2018. For the last four months, Dahl has been living with the longest-lasting flood in the area’s history.

Dahl’s home on the lake hasn’t been flooded, but her boathouse and pier are damaged, likely to the tune of tens of thousands of dollars, and they’re not covered by insurance. 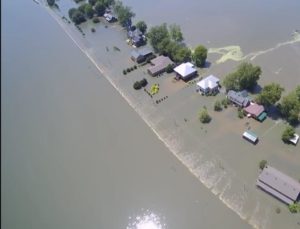 Houses on Eagle Lake. The diagonal line is Eagle Lake Shore Road. Water to the left is a flooded farmer’s field. Water to the right is Eagle Lake. Under normal conditions you would see boathouses and piers behind the houses, but they are completely submerged because the lake is 22 feet higher than it should be. The backwater and the lake are equalized. Photo courtesy Ann Dahl.

She’s shares her fate with neighbors—including the realtor who sold Dahl her home—and estimates that about half of Eagle Lake’s homes may have escaped flood damage, but no piers and outbuildings were spared. “Every one of them are completely underwater,” she said.

“I’m one of the lucky ones,” she told the Vicksburg Daily News.

It’s cold comfort for Dahl and other homeowners on the lake. Providers suspended most general services to the area, including trash pickup and mail delivery. To get anywhere—a grocery story, a church—means adding hours of travel time to what was once a quick round trip. “You better plan ahead” for every trip, she said, adding that stranded wildlife fills the roadways making every trip hazardous. She’s seen alligators and even a bear on the roads. If anyone in the community has a medical emergency, it could be two hours before an ambulance got through.

Like many of her neighbors, Dahl decided to stay despite an evacuation order in March. She felt her home would be OK unless floodwaters cut off access completely or she lost vital services such as electricity or the internet. Her resolve has been tested.

“I needed to stay here and protect my house,” she said. She couldn’t take her pets with her, either, and couldn’t abandon them. Dahl cancelled trips to visit her daughter in Tacoma, Wash., because she was so concerned about her home. “It is a full-time job to keep debris out … to try and minimize the damage,” she said. 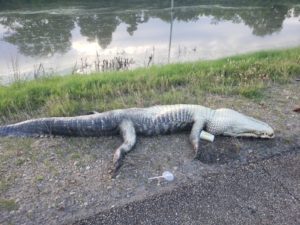 A dead alligator on the side of the road in northern Warren County. Photo courtesy David Childers.

Dahl has also become something of an expert in the space she now occupies: an advocate for completing the pumps.

“I spent weeks researching (the flood) and trying to figure out how we got here,” she said. The result was a website, “Finish the Pumps,” where she writes a blog on her personal experiences, as well as documenting the history of the Yazoo Backwater Project.

To understand all the elements that led to this year’s historic flooding, how they came to be and who is responsible, Dahl amassed a wealth of information and resources including documents from the Corps, news articles, press releases, Facebook groups and a link to a petition to override the EPA’s 2008 veto of the pumps.

“I do not claim to be an expert on the Yazoo Backwater Pump Project,” Dahl wrote on her blog. “I am just an informed citizen trying to accumulate information.”

Being an advocate is a new experience for Dahl.

“When I was in school, I was one of those invisible kids. Not in the popular crowd and not running with the wild ones. I just did everything I could to blend into the crowd and not be noticed,” Dahl wrote. “It was not until my forties that I started gaining a little confidence and finding my voice. But now I find myself in a situation, in my retirement years, that demands that I stand up for what I believe is right.” 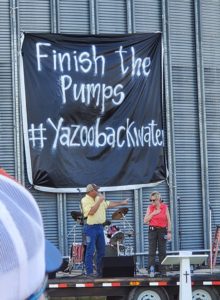 U.S. Senator Cindy Hyde-Smith is introduced to a gathering at Valley Park.

Citizen Dahl has a clear goal: “For the government to do what they promised to do back in 1941. … Build the pumps,” she said. Dahl concluded—and many agree—that the pumps would have spared Eagle Lake and many of the Yazoo Basin residents and farmers affected by this year’s historic flood. The Environmental Protection Agency vetoed their completion in 2008 due to concerns for the sensitive wetlands in the area.

“I’ll take this bullet for this one time flood if we can get those pumps installed and completed,” Dahl said of her situation.

She calls it “the forgotten flood.”

“Every time it floods in the Midwest, it gets a lot of coverage,” Dahl said, but the Mississippi Delta isn’t getting the attention from national news outlets that it should be getting. “People don’t know what’s going on.”

Unlike quick moving events such as tornadoes and flash floods, this disaster has been going on for months.

“We are just stuck in slow torture with no end in sight,” Dahl said.

Another casket emerges from the flood