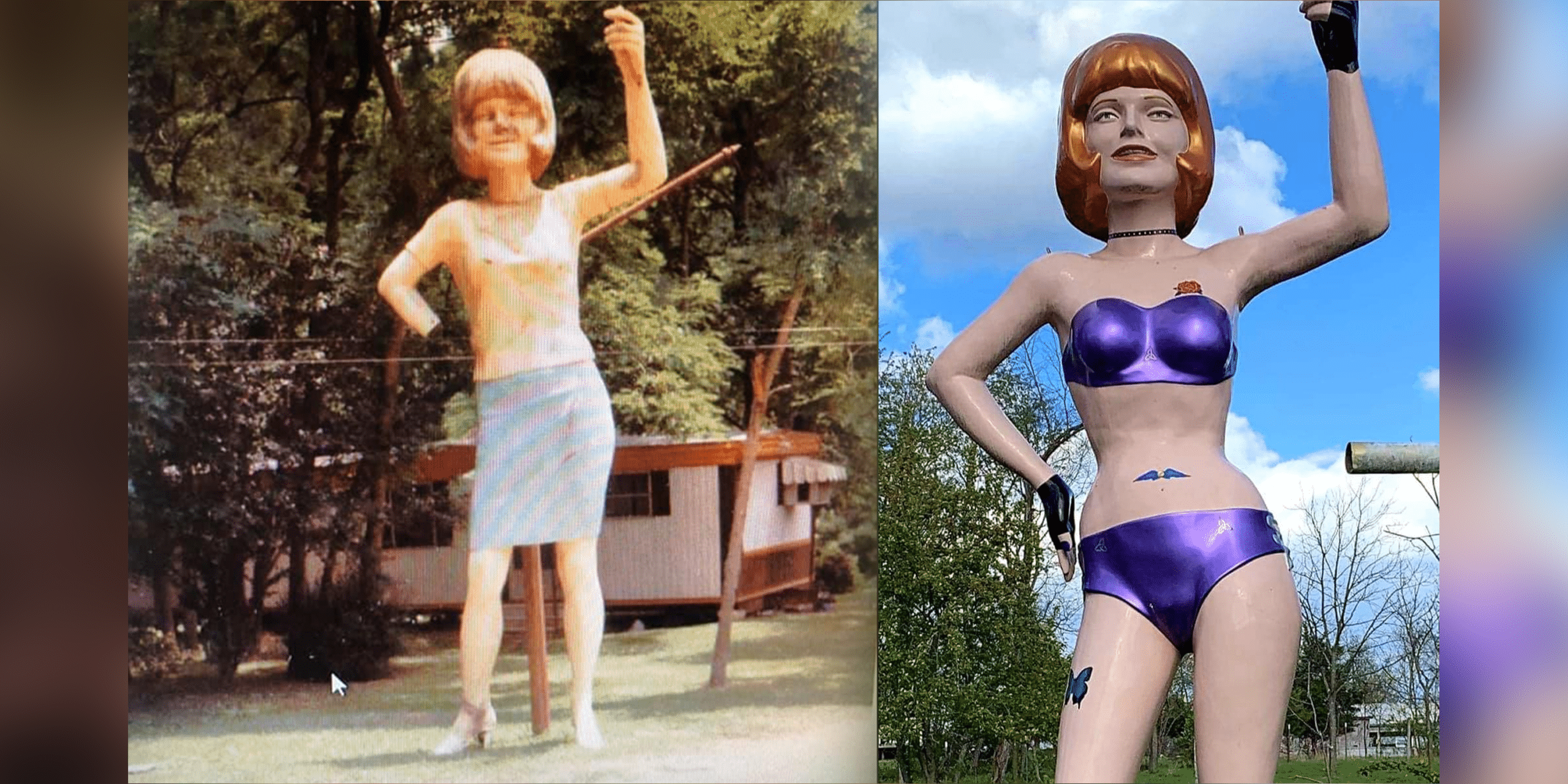 Earlier this week, Tommy “don’t be our next news story” Parker was moving some things around and came across a photo of the “Big Lady” that stood on Highway 80 in Vicksburg for so many years. He thought it would make a good story so he did a quick piece on her and posted the old photo he found.

It sparked a fair amount of interest and was a fun story about what used to be in Vicksburg.

When Toney’s Grill and Seafood owner Charles Toney saw the story he immediately said he wanted to find her and put her in front of his popular restaurant on 61 North. Toney then challenged Tommy Parker and David Day to find her so he could bring her back to Vicksburg.

A well-known local saw Toney’s remark and called the Vicksburg Daily News to let us know the Big Lady was laying behind an old pecan/junkyard on Highway 80. Another person told Tommy Parker it was on Highway 80 but up the road and behind the original location, down the hill, covered in weeds. Several people commented online about their piece of the Big Lady story.

That led us to Judy Wilson. Judy is the daughter of S.O. “Otto” Jones Sr. who displayed the giant “Uniroyal Gal” in front of his salvage service on Highway 80. “My oldest sister says daddy got it in 1964,” Wilson told the Vicksburg Daily News, “Daddy got it from Lamar Loe, a car dealer in Vicksburg, I remember it being there when I was a teenager.” 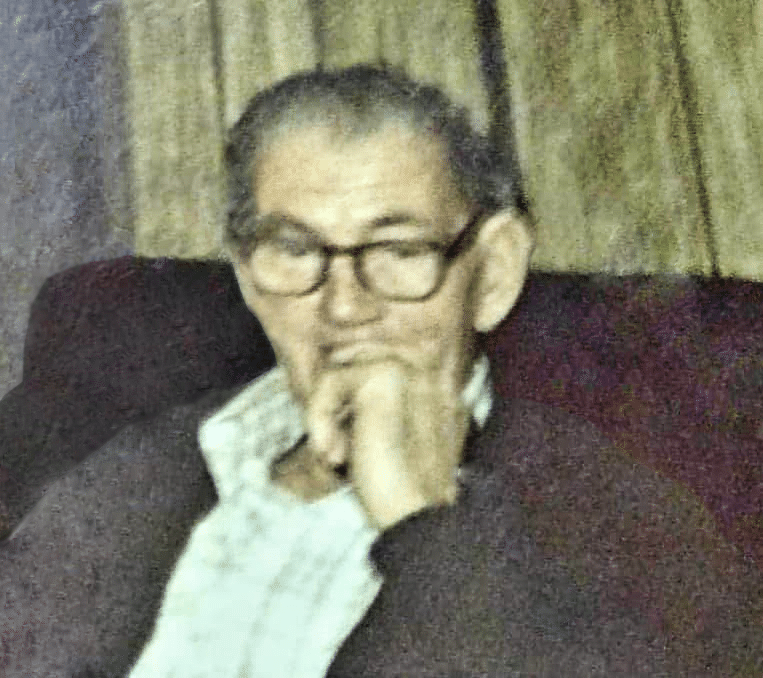 The Big Lady was built in 1963 by International Fiberglass for Uniroyal. Lamar Loe had her on display at his automobile business in town holding a tire in her raised left hand.

In the 1960s, several nationwide companies were having fiberglass figurines made to place in front of their satellite units across the nation. Probably the most famous is the “Midas Muffler Man,” an 18-25 foot tall Paul Bunyan-looking statue that dotted American roadways in the ’60s, ’70s and ’80s.

The Midas Man on display at the Farnham Colossi in Unger, West Virginia. Photo by George Farnham.

The Uniroyal Gal, at 17 feet, 6 inches tall and 450 lbs., is the rarest of fiberglass giants because she is the only girl. All the others are either men or animals. She was designed to look like Jackie Kennedy by the model maker who was infatuated with her — as was most of the world at that time. The giant was to be displayed either in her bikini or you could cover the bikini with a removable fiberglass skirt and top. She even came with an extra dress that had a longer hemline for the areas of the country where an 18-foot tall bikini-clad Jackie Kennedy might be considered risqué. Although close to 100 of them were made, only 11 are known to survive to this day.

The Uniroyal Gal that stood on Highway 80 in Vicksburg is currently on display at the Farnham Colossi. She has matured a bit. Photo by George Farnham.

Our Uniroyal Gal, called the Big Lady by Vicksburg locals, found her way to S.O. Jones salvage yard on Highway 80 in 1964, according to the family. She stayed there for a couple of decades as a Warren County icon until 1991 when she was sold to Kenny Allen over in Byram. Allen put her up seasonally at his fireworks stand just off of exit 85 on Interstate 55.
“They lived right up the street and I remember seeing her in the weeds behind their house,” explained Mayor Richard White of Byram. “He would bring her out in fireworks season and put her in front of his stand.”

She fulfilled her duties in Byram for about 15 years until a group whose hobby is to keep track of unusual roadside attractions discovered her.  By 2007, Barry McLemore had purchased the Uniroyal Gal from Allen in Byram. McLemore realized, after he got it home, that he didn’t have a place for the giant statue and was wanting to get rid of her quickly.

Enter George Farnham. Farnham is in Unger, West Virginia, and has been collecting and restoring the gentle roadside giants for 17 years now. He had been working to find the rare Uniroyal Gal or, as he called her, “the Holy Grail of roadside giants.” His property has several of these giants and “10 to 20 people a week on average drop by to see them. They have a cult following,” explained Farnham. 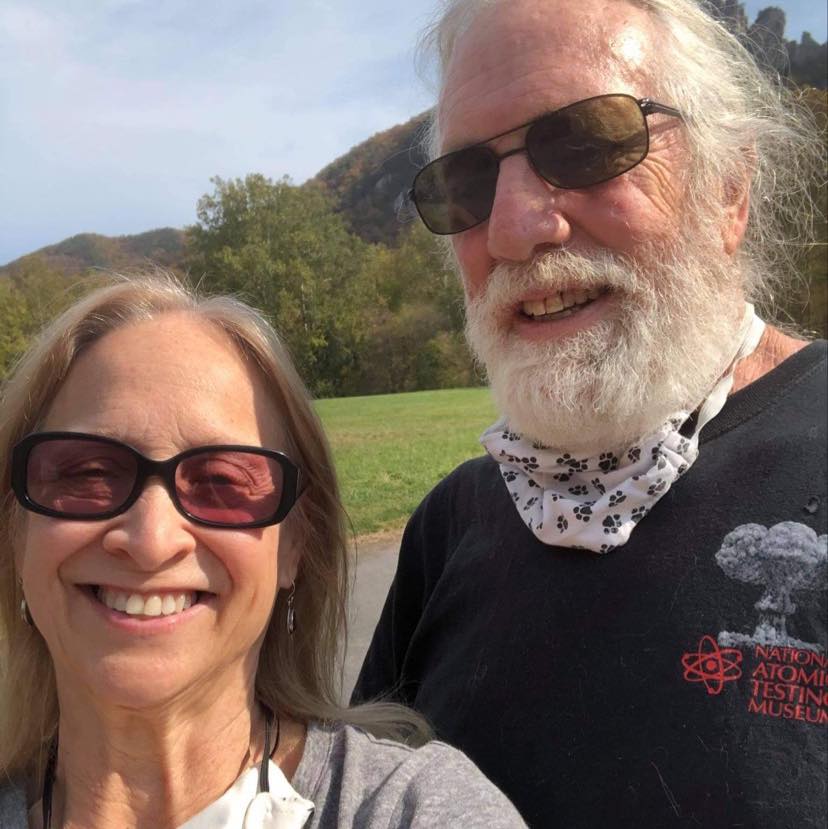 Cult following indeed. As it turns out there are thousands of people in America who travel to locations all over the country to admire and have their photo taken with these “gentle giants” as Farnham likes to call them. “I had an 85-year-old couple come by with three scrapbooks of all the statues they have seen. Cult following but incredibly dedicated by those who do it.”

Farnham started collecting and restoring the giants on his 50th birthday in 2004. “I wanted a dinosaur from [nearby] Dinosaurland, but they are still [in business].” joked Farnham. He spent a small fortune to transport and restore the Big Lady to her original, albeit updated glory. Farnham explained the “…cost of the statue is often a secondary figure. I’ve spent more transporting sometimes than the statue. Same for restoration.”

But for George Farnham, it was an act of love.

The “Big Lady” that is well remembered by so many Vicksburg locals is a rare queen of roadside giants who, at age 58, looks better than ever and is enjoying the fresh air along with her fellow giant friends. She has gentle and loving caretakers hosting her near the nation’s capital at a place called “The Farnham Colossi.”

Has anyone seen the ‘Big Lady’ lately?