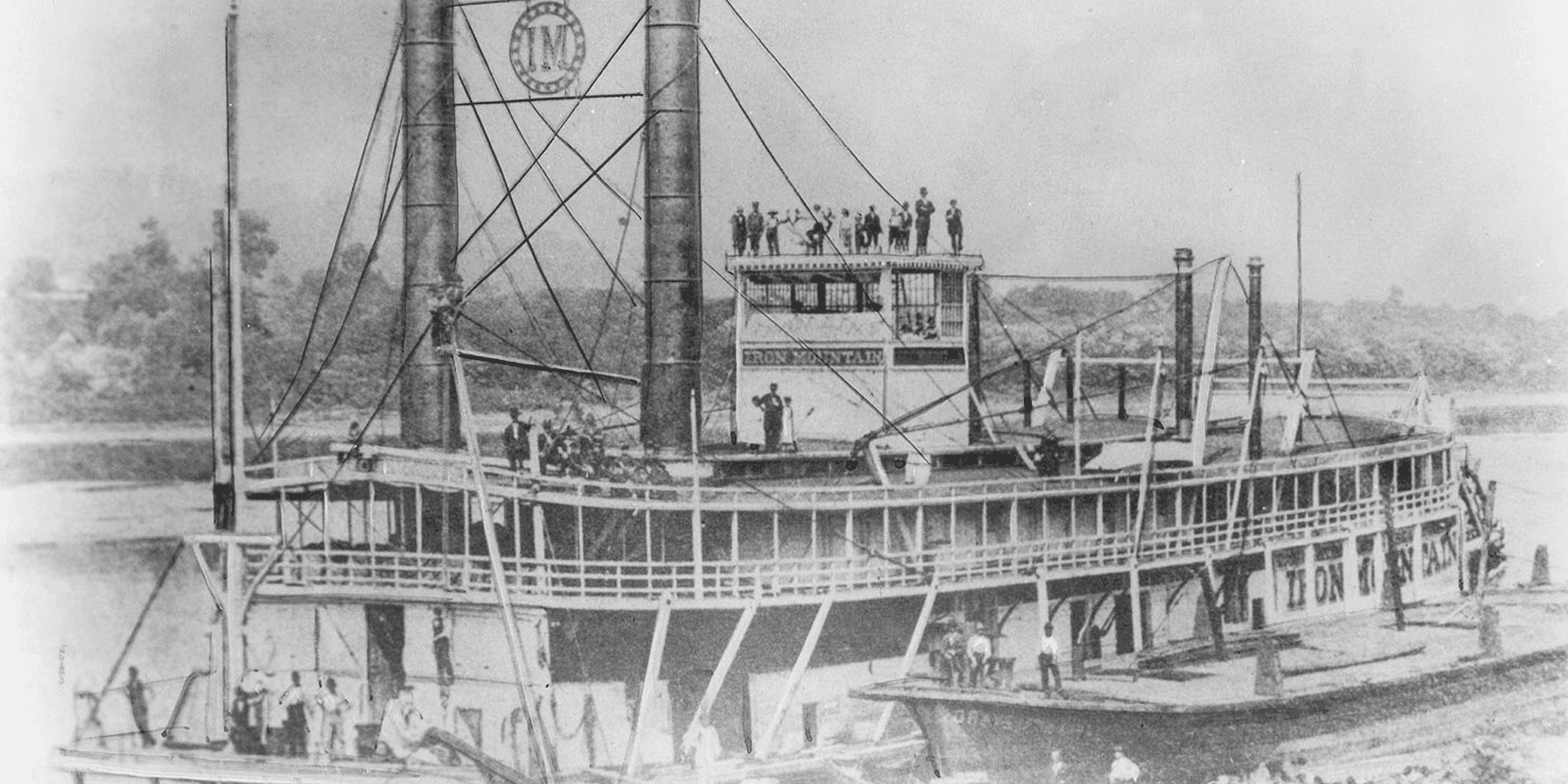 The towboat Iron Mountain at a landing. (Keith Norrington collection)

The following is reprinted with permission from Waterways Journal:

On March 25, 1882, shortly after departing Vicksburg, Miss., the towboat Iron Mountain struck an underwater obstruction and sank near Island 102 on the Lower Mississippi River. The entire crew escaped safely, with the exception of a chambermaid, who clung to floating debris and was rescued the following morning. The five barges being towed by the Iron Mountain were cut loose and found by another upbound steamer. The holed steamboat went completely out of sight, and all that was ever located of the vessel was some splintered wood from the cabin and an ice box that was found in a cotton field at Omega Crevasse, near Tallulah, La., the following June.

The Iron Mountain was built at Freedom, Pa., in 1872, and, with a wooden hull measuring 181 feet in length by 35 feet in width, was the largest towboat in the Gray fleet. Capt. W.C. Gray was the first master. Five boilers provided steam for engines having 22-inch cylinders with an 8-foot stroke.

A Pittsburgh newspaper ran the following: “To our enterprising fellow citizen Capt. R.C. Gray belongs the honor of first introducing steel boilers on steamboats of the western rivers. In 1872, he contracted for, and had built by Carrol, Snyder & Co., a battery of five homogenous steel boilers which were the first ever in the west. They were made of ‘black diamond’ steel from the works of Park Bros. & Co., of this city and were 40 inches in diameter by 26 feet long, rivet holes drilled and double riveted. They are now on the towboat Iron Mountain of Gray’s Iron Line and are allowed 270 pounds of steam. The second set went on the towboat George Lysle.”

The Iron Mountain had fancy-topped stacks and was somewhat ornate for a towboat.

New machinery was installed on the vessel in 1879, shortly before it was sold, along with four model barges, to the Mound City Ice Company. Headed by Fred Schulenberg, a new subsidiary was formed, known as the Mound City Transportation Company. The firm also owned the hulls of the former packets Illinois, Indiana and Great Republic, all of which had been converted into model barges and were capable of hauling great tonnage; the Great Republic barge could load 3,500 tons. The Iron Mountain, with Capt. John Greenough as master, towed between St. Louis and New Orleans; in September 1880, the boat towed the three model barges downriver loaded with 7,000 tons of grain.

Throughout the decades, numerous articles concerning the mysterious 1882 disappearance of the Iron Mountain have been published, some of them factual and others fraught with great imagination.

Editor’s note: For questions or suggestions regarding the Old Boat Column, Keith Norrington may be contacted by e-mail at [email protected]

Caption for photo: The towboat Iron Mountain at a landing. (Keith Norrington collection)