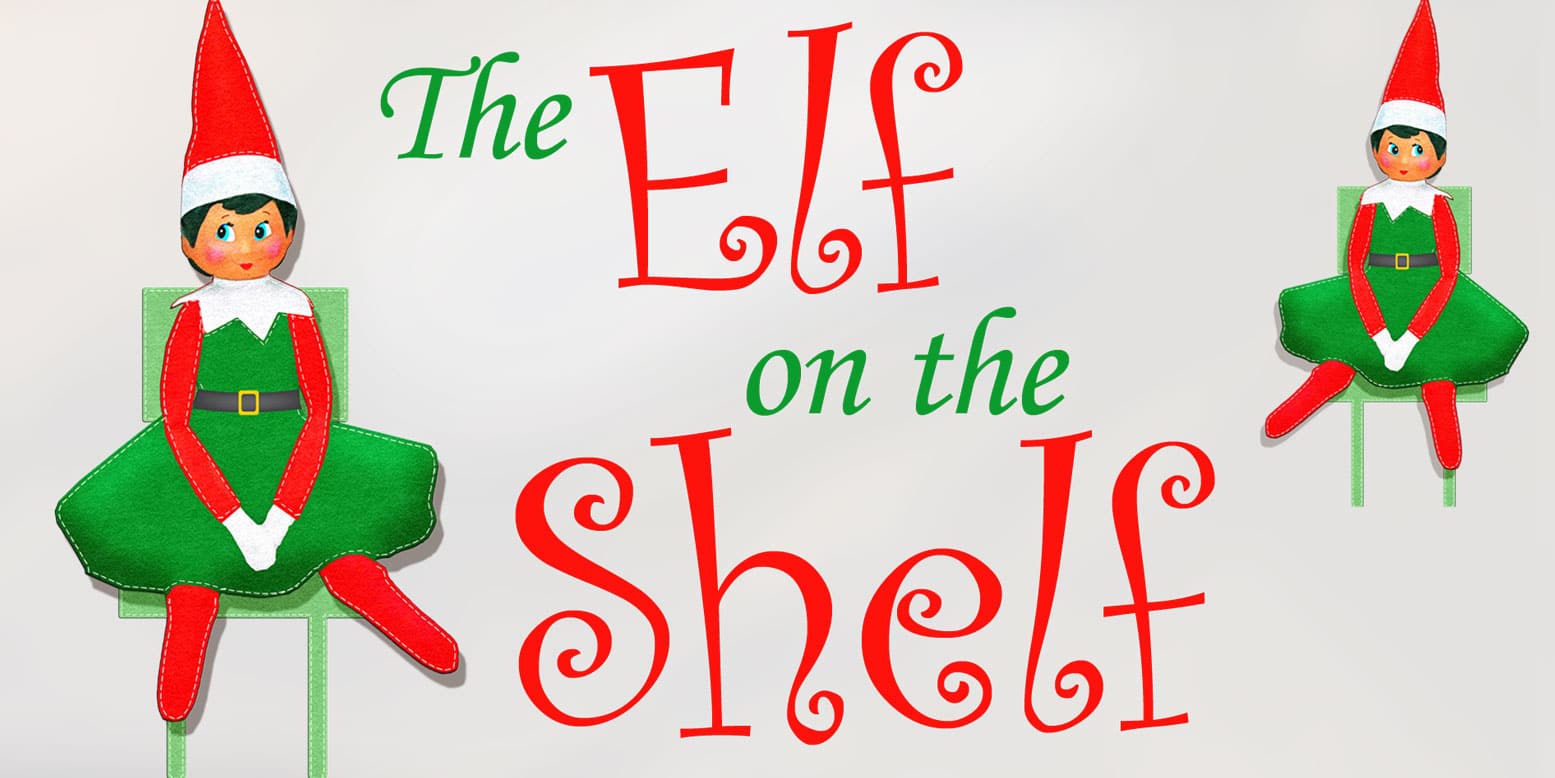 Love him or hate him, it looks like the elf on a shelf is here to stay. Well, until January at least. That’s when he will travel back to the North Pole to hibernate for 11 months.

For those of you who have been living under a poinsettia plant and aren’t familiar with the little imp, here’s a little history. The popular Christmas tradition involves a storybook and accompanying pixie elf figure, the brainchild of stay-at-home mom Carol Aebersold and her grown twin daughters, Chanda Bell and Christa Pitts.

In 2004, Aebersold and Bell wrote the poem that would become the product’s storybook. Along with Pitts, they launched a company the following year to bring the story and tradition to other families across the country.

According to the book, the elf is a “scout elf” who sits on a shelf or table or another part of a family’s home to observe the children’s behavior during the holiday season.

Each night, the elf flies back to the North Pole and reports the kids’ actions to Santa Claus to inform his naughty and nice list picks. The elf then returns before the children wake up and settles in a new part of the house, creating a hide-and-seek game each morning.

But for all the sentiment and fond childhood memories the elf is sure to bring, many overworked parents have also complained that the Pinterest-y element has gotten out of hand, as children awake to find their elves engaged in elaborate scenes and creative antics that require serious time and effort to bring to life. The popular practice of posting Elf on the Shelf scenes on social media also adds to the pressure.

“I couldn’t wait for my kids to outgrow that thing,” said Helen Ashley, mother of two. “I’d have to set an alarm to wake me up in the middle of the night so I could move him. The entire month of December I’d see all of the ‘supermoms’ posting the cute ways they posed theirs in little handmade outfits, and I was just proud of the fact our elf moved at all.”

Ashley, a retired teacher in law school at Mississippi College and working in the hospitality industry, said, “I felt like that woman on the internet. ‘Ain’t nobody got time for that!'”

Well, apparently a lot of people have time for that, as proven by the following pictures sent in from supermoms all over Vicksburg.

All resident elves are named by their respective families. Bridget Newsome Calvert allowed her two children to choose their elf’s name. Rosie Joe is shown making a ‘snow’ angel (and a mess) in powdered sugar. 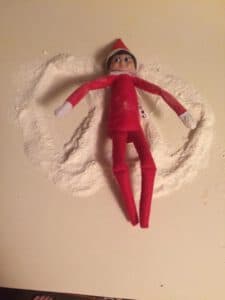 Ginny Clanton, a teacher at Agape Montessori Christian Academy and mother of two, said, “Lexi (her younger daughter) loved her elf so much she wanted to have her own tree with just elves. Now collecting elves is a fun yearly tradition.” 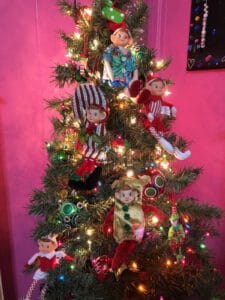 Cambria Frantz, mother of 8-year-old Briana, said of her elf hiding in the toilet paper, “I’m a single mom with two jobs. I just don’t have the time to come up with a lot of detailed ideas. I need to get more creative.” 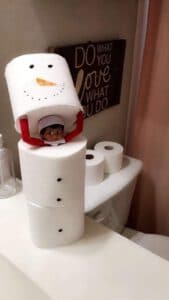 Melissa Fuller Deckard is mother to two teens, but she hasn’t let that diminish the joy of the tradition.  Of her elf, Cookie, she said, “You can tell it’s getting close to the big day when Santa sends Cookie to round up reinforcements.” 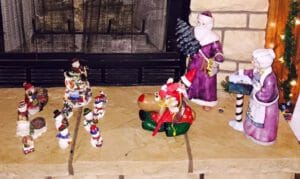 Just because they live fairly isolated at the North Pole 11 months of the year, Santa still insists that his elves follow safety protocols like quarantining… 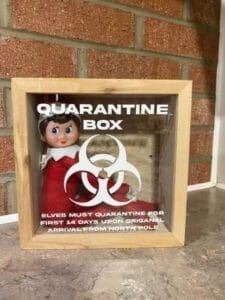 … and wearing their masks properly. 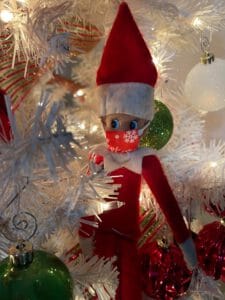 Moms and dads aren’t the only people getting in on the fun. Elves are known to show up anywhere Santa needs help watching and documenting naughty or nice behavior.

One elf made an appearance at Bovina Elementary School in Mrs. Alisa Harvey’s kindergarten classroom and even brought a very special letter from the big man himself. 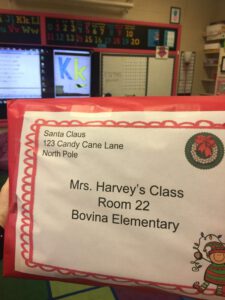 Mrs. Harvey and her students even caught their elf in the middle of a bubble bath! But what do you expect? It’s a long trip from the North Pole to Vicksburg. 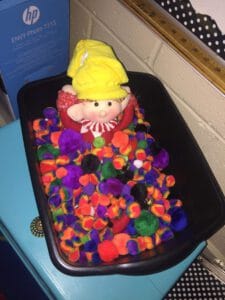 At Beechwood Elementary, Jennifer Stringer’s pre-K students caught their elf, Jedi, in the middle of playtime.

Jedi tends to be a mischievous little sprite from the looks of the mess he made in their classroom. 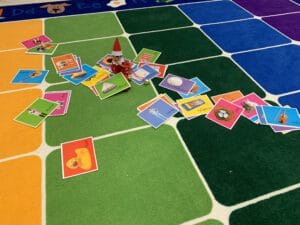 Nicole Coulter Gilmer and her son, Maddux, took a last minute trip to Oxford, Mississippi, Saturday to watch the Egg Bowl, the traditional match-up between the University of Mississippi Rebels (note: not a bear nor a landshark) and the Mississippi State University Bulldogs.  Their elves, Max and Chippy, got into the spirit and celebrated the Ole Miss victory. 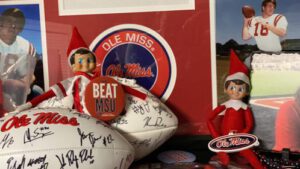 It’s also not uncommon to see the Christmas visitors with injuries that render them immobile, like this one at Beverly Johnson’s county home.  Johnson, a busy grandmother who also has a full-time job, said, “My elf has a broken leg so he can’t move around the house every night.” Bless his heart. 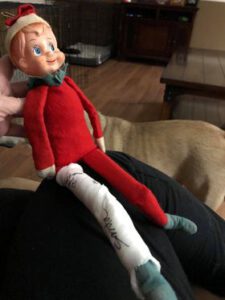 And then there are the elves that are full of adventure and extra holiday spirit like Elfie and Elsie, who entertain the Cain family each December.  The Cains are dad Jamie, road manager for the Warren County Road Department, mom Jennifer, a special education teacher at Warren Central High School, and their two children. Kaiden, their 10-year-old son, is a student at Bowmar Elementary and 4-yr-old Kinsley is in pre-K at Beechwood Elementary.

Jamie and Jennifer are the parents who give other, less imaginative parents elf insecurity. “I have entire books full of pictures of our elves shenanigans. My sisters keep telling me I’m extra,” Jennifer said with a laugh.

Some of their elves favorite activities include: 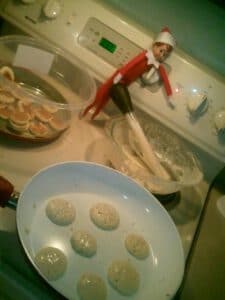 Face-timing on an iPhone 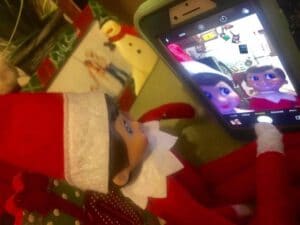 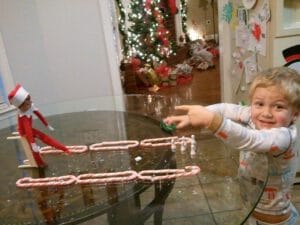 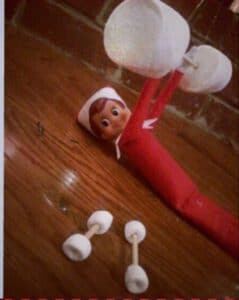 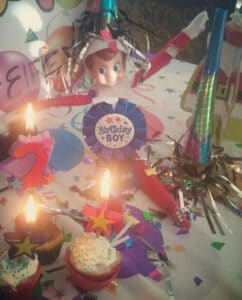 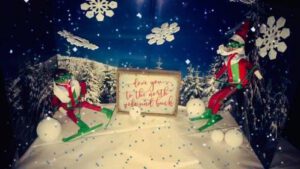 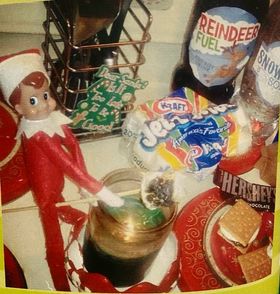 getting tied up by the Tooth Fairy 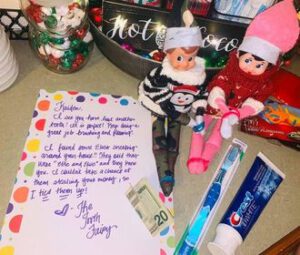 getting silly in the refrigerator 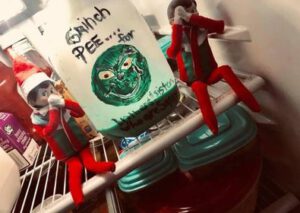 and playing UNO with some familiar friends. 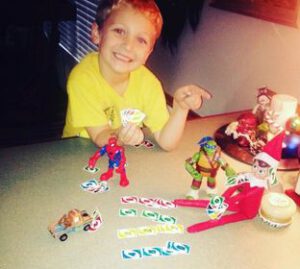 The Cain’s elves have also been used to teach some important lessons, like giving to those less fortunate, 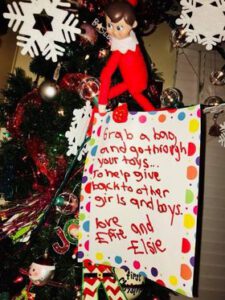 and remembering the real reason for the season. 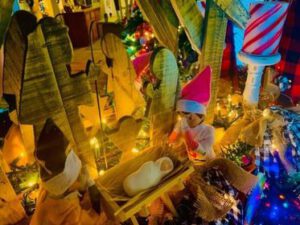 For all of the fun they have, the messes they make, the lessons they teach, and the memories they create, eventually every elf must say goodbye and go home. 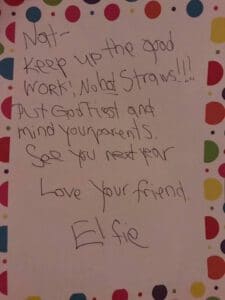 But good-bye isn’t forever. We’ll see them all again in 11 months.