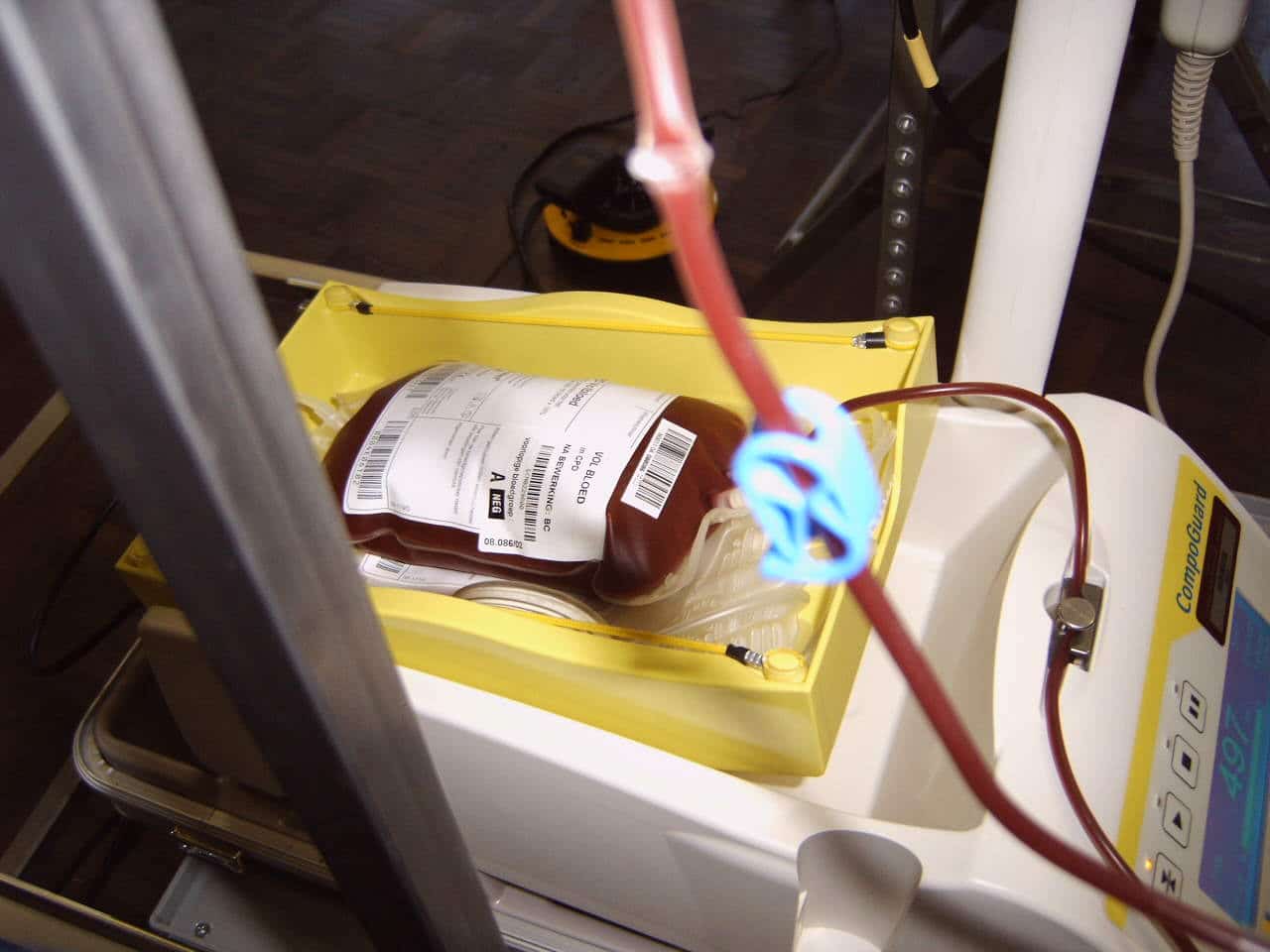 (Photo by User:MartinD, edited by Mattes - Own work, CC BY 2.5, https://commons.wikimedia.org/w/index.php?curid=347107)
By JoNel Aleccia
Kaiser Health NewsThe nation’s roiling tensions over vaccination against covid-19 have spilled into an unexpected arena: lifesaving blood transfusions.

With nearly 60% of the eligible U.S. population fully vaccinated, most of the nation’s blood supply is now coming from donors who have been inoculated, experts said. That’s led some patients who are skeptical of the shots to demand transfusions only from the unvaccinated, an option blood centers insist is neither medically sound nor operationally feasible.

“We are definitely aware of patients who have refused blood products from vaccinated donors,” said Dr. Julie Katz Karp, who directs the blood bank and transfusion medicine program at Thomas Jefferson University Hospitals in Philadelphia.

Emily Osment, an American Red Cross spokesperson, said her organization has fielded questions from clients worried that vaccinated blood would be “tainted,” capable of transmitting components from the covid vaccines. Red Cross officials said they’ve had to reassure clients that a covid vaccine, which is injected into muscle or the layer of skin below, doesn’t circulate in the blood.

“While the antibodies that are produced by the stimulated immune system in response to vaccination are found throughout the bloodstream, the actual vaccine components are not,” Jessa Merrill, the Red Cross director of biomedical communications, said in an email.

So far, such demands have been rare, industry officials said. Dr. Louis Katz, chief medical officer for ImpactLife, an Iowa-based blood center, said he’s heard from “a small handful” of patients asking for blood from unvaccinated donors. And the resounding answer from centers and hospitals, he added, has been “no.”

“I know of no one who has acceded to such a request, which would be an operational can of worms for a medically unjustifiable request,” Katz wrote in an email.

In practical terms, blood centers have only limited access to donated blood that has not in some way been affected by covid. Based on samples, Katz estimated that as much as 60% to 70% of the blood currently being donated is coming from vaccinated donors. Overall, more than 90% of current donors have either been infected with covid or vaccinated against it, said Dr. Michael Busch, director of the Vitalant Research Institute, who is monitoring antibody levels in samples from the U.S. blood supply.

“Less than 10% of the blood we collect does not have antibodies,” Busch noted.

In addition, outside of research studies, blood centers in the U.S. don’t retain data noting whether donors have been infected with or vaccinated against covid, and there’s no federal requirement that collected blood products be identified in that manner.

“The Food and Drug Administration has determined there’s no safety risk, so there’s no reason to label the units,” said Dr. Claudia Cohn, chief medical officer for AABB, a nonprofit focused on transfusion medicine and cellular therapies.

Indeed, the FDA does not recommend routine screening of blood donors for covid. Respiratory viruses, in general, aren’t known to spread by blood transfusion and, worldwide, there have been no reported cases of SARS-CoV-2, the virus that causes the disease, being transmitted via blood. One study identified the risk as “negligible.”

All donors are supposed to be healthy when they give blood and answer basic questions about potential risks. Collected units of blood are tested for transmissible infectious diseases before they’re distributed to hospitals.

But that hasn’t quelled concerns for some people skeptical of covid vaccines.

In Bedford, Texas, the father of a boy scheduled for surgery recently asked that his son get blood exclusively from unvaccinated donors, said Dr. Geeta Paranjape, medical director at Carter BloodCare. Separately, a young mother fretted about transfusions from vaccinated donors to her newborn.

Many patients expressing concerns have been influenced by rampant misinformation about vaccines and the blood supply, said Paranjape. “A lot of people think there’s some kind of microchip or they’re going to be cloned,” she said.

Other patients have balked at getting blood from people previously infected with covid, even though federal guidance greenlights donations two weeks after a positive test or the last symptom fades.

Last month, a woman facing a cesarean section for a high-risk pregnancy said she didn’t want blood from a donor who had had covid, recalled Cohn with AABB. “I said, ‘Listen, the alternative is you don’t get the blood and that’s what will affect you,’” Cohn said.

Some industry experts were hesitant to discuss the vaccine-free blood requests, for fear it would fuel more such demands. But Cohn and others said correcting widely spread misinformation outweighed the risk.

Patients are free to refuse transfusions for any reason, industry officials said. But in dire situations — trauma, emergency surgery — saving lives often requires using the available blood. For patients with chronic conditions requiring transfusion, alternative treatments such as medication or certain equipment may not be as efficient or effective.

People who require transfusions also may donate their own blood in advance or request donations from designated friends and family members. But there’s no evidence that the blood is safer when patients select donors than that provided by the volunteer blood system, according to the Red Cross.

Earlier in the pandemic, many blood donations were tested to see whether they contained antibodies to the covid virus. The hope was that blood from previously infected people who had recovered from covid could be used to treat those who were very sick with the disease. Tens of thousands of patients were treated with so-called convalescent plasma under a Mayo Clinic-led program and through authorization from the FDA.

But the much-hyped use of convalescent plasma largely fell flat after studies showed no clear-cut benefits for the broad swath of covid patients. (Research continues into the potential benefits of treating narrowly targeted patient groups with high-potency plasma.) Most hospitals stopped testing blood and labeling units with high levels of antibodies this spring, said Busch. “It’s really no longer a germane issue because we’re not testing anymore,” he said. “There’s no way we can inform recipients.”

Busch stressed that the studies also have shown no harm associated with infusing antibody-containing blood plasma into covid patients.

Past health crises have raised similar concerns about sources of donor blood. In the mid-1980s, recipients scared by the AIDS epidemic didn’t want blood donated from cities such as San Francisco with large gay populations, Busch recalled. Even now, some recipients demand not to receive blood from people of certain races or ethnicities.

Such requests, like those for vaccine-free blood, have no medical or scientific basis and are soundly refused, blood center officials said.

The most pressing issue for blood centers remains the ongoing shortage of willing donors. As of the second week of August, the national blood supply was down to two days’ worth or less at a third of sites affiliated with America’s Blood Centers. That can limit the blood available for trauma victims, surgery patients and others who rely on transfusions to survive.

“If for some reason we didn’t want vaccinated people to donate blood, we’d be in a real problem, wouldn’t we?” Karp said. “Please believe us when we tell you it’s fine.”

KHN (Kaiser Health News) is a national newsroom that produces in-depth journalism about health issues. Together with Policy Analysis and Polling, KHN is one of the three major operating programs at KFF (Kaiser Family Foundation). KFF is an endowed nonprofit organization providing information on health issues to the nation. This story has been republished under a Creative Commons (CC BY-NC-ND 4.0) license.