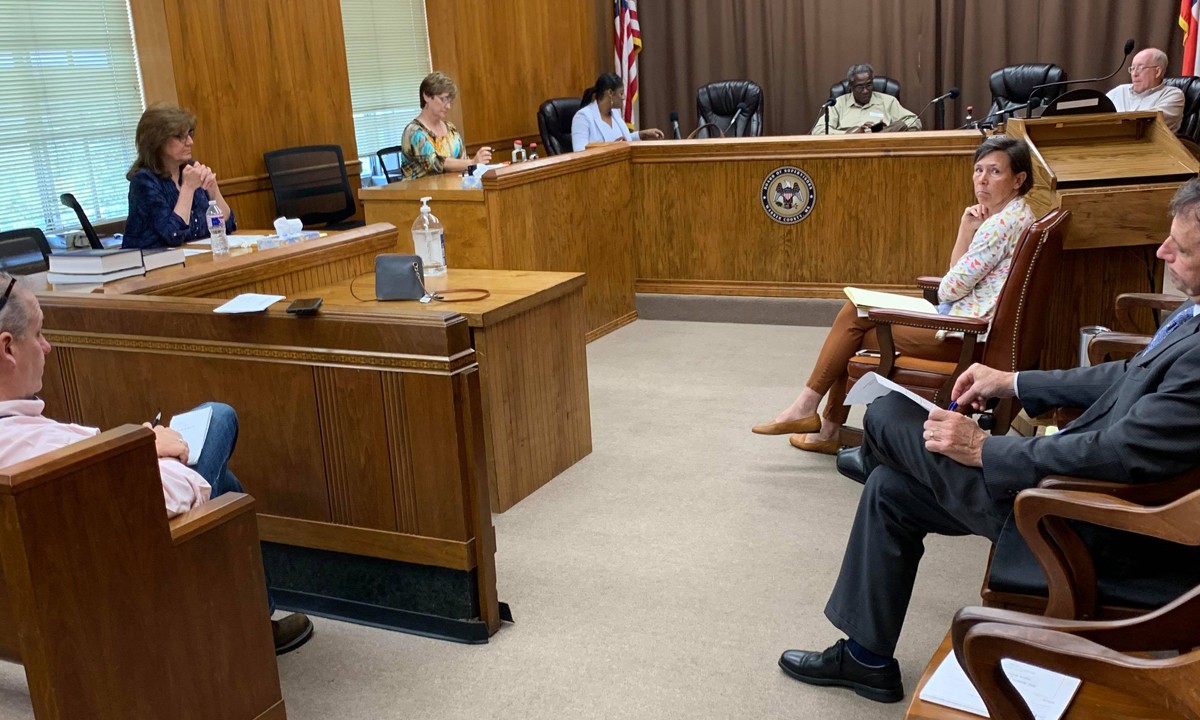 Warren County supervisors left plenty of room between themselves when they met Monday morning in their regularly scheduled work session.

As usual, the meeting was held in the board room on the second floor of the Warren County Courthouse, but complying with COVID-19 social distancing protocols meant they were spread around the room instead of all being up front in their regular seats. A proposal was made to move future meetings to one of the courtrooms not in use.

Most of the discussion centered on how the county is adapting to guidelines to prevent the spread of the virus and whether the county would adopt the measures from the City of Vicksburg’s civil emergency proclamation announced yesterday afternoon.

The most contentious issue of the meeting was whether to enact a curfew.

“We need to do ours and let them do theirs,” said District 2 Supervisor William Banks. “We don’t have to follow the city.” This led to an almost hour-long discussion of the legalities surrounding curfews and potential problems. The board decided it would not impose a curfew for now.

County work crews are being asked to keep their workgroups consistent as much as possible, said District 1 Supervisor Edward Herring. This would allow the entire group to be quarantined if one became ill.

District 3 Supervisor Shawn Jackson is studying various methods for telecommuting or working at home for employees in different agencies. She hopes to have some methods that will work for the county shortly.

Chancery Clerk Donna Ferris Hardy reported that the circuit clerk and tax collector’s offices have begun rotating employees’ workdays. Currently, they are working schedules of two or three days on, then two or three days off. Hardy said there is a discussion of changing to a two week on and off scenario. She added that the Mississippi Supreme Court is issuing opinions on many of these issues due to statutory requirements.

Board President Jeff Holland instructed Board Attorney Blake Teller to get a copy of the recent action by the state Legislature that allows the board to pay employees under administrative leave policies during the crisis.

Emergency Management Director John Elfer said emergency resources have begun to arrive daily. He has named Reid Birdsong as chief of logistics during the crisis to oversee gathering resources from state and federal agencies and manage distribution. Elfer also said he has sent three employees home due to compromised immune systems.

Sheriff Martin Pace asked the board to use some mechanism to close the bars in the county, and the board agreed.

“With the city closing all of their establishments, (residents) will migrate to the county,” he said.

Pace referred in particular to two trouble spots on Greenhill Road off U.S. Highway 80 where his office frequently responds. Another potential problem is people gathering at convenience-store parking lots.

Pace said he would bring up additional issues at a later date, referring to Warren County’s lack of ordinances to enforce loitering and open container rules.

Teller will be crafting a resolution for the board’s review by Tuesday which will allow the county to implement and enforce additional measures to protect the public from the spread of the COVID-19 coronavirus.

Another meeting will take place to approve the resolution prior to making it public.

AmeriCorps is looking for young people ready to make a difference