Former NFL player Steve McNair would have been 47 years old today, and he remains a legend in football in Mississippi and around the world.

McNair was born and raised in Mount Olive, Miss., where he lettered in football, basketball and track. In addition to leading his team to a championship game in his junior year, McNair turned down offers to play at big schools such as the University of Florida. He eventually agreed to play at Alcorn State University where he broke records.

The Houston Oilers drafted McNair as the third pick of the 1995 NFL draft. The Oilers changed their name to the Tennessee Titans in 1999, and that’s where McNair played most of his NFL career.

McNair was playing for the Baltimore Ravens in 2006 when he led them to a 13-3 season playing with notable players such as Ed Reed and Ray Lewis. In 2008 McNair announced his retirement from the NFL.

Just a little over a year later, McNair was killed in a murder-suicide by Sahel “Jenni” Kazemi, his mistress, on July 4, 2009.

McNair was 36 years old at the time of his death.

People traveling on Mission 66 in Vicksburg Wednesday may have noticed the many American flags adorning the sidewalks along the shops, salons, and medical offices that populate the busy road.

People traveling the same route the previous night may have seen the man responsible for placing them there.

In fact, he credits the Navy for helping him become the successful dentist he is today.

Measells joined the military May 16, 2005, during his second year of dental school.

“Military recruiters came by from time to time with the chance to finish dental school without owing a dime in student loans,” he said. “I thought that was a great idea, and I liked the movie ‘Top Gun,’ so I signed on the dotted line.”

Looking back now, he believes it was the greatest decision of his life.

Measells was stationed at Marine Corps Base Camp Lejeune in Jacksonville, North Carolina.

“While there, I had the chance to work with some of the most talented dentists in every specialty,” he said, “and all the while I was treating the selfless and heroic men and women that comprise one branch of the greatest military in the world.”

Measells served during Operation Enduring Freedom, the global war on terrorism the U.S. launched Oct. 7, 2001, in response to the 9/11 terrorist attacks.

“During that time many of the active duty personnel were deployed multiple times. Some came home injured mentally, physically or both,” he said. “And then there were those who didn’t come home at all.”

Measells said he did little in comparison to many of the brave men and women who served, but he feels honored to have walked beside so many heroes.

Veterans Day, Nov. 11, reminds him of his favorite Bible verse, John 15:13. “Greater love hath no man than this, than to lay down his life for his friends”

As for the flags lining Mission 66, Measells said, “It’s just my small way to honor those who have, at one point, written a blank check to this country for an amount up to life.” 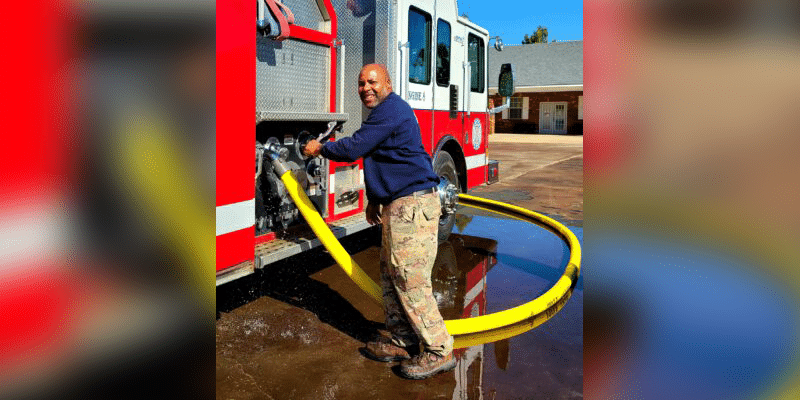 You wake up and smell smoke. You quickly walk through the house but can’t find the source, so you grab the kids and call 911. After a few minutes, you can hear the sirens in the distance, but they don’t seem to be getting any closer; the fire truck is broken down.

Overton Randolph’s job is to ensure that such a scenario never happens in Vicksburg. As the mechanic for the Vicksburg Fire Department, his role is to make certain that all in-service fire apparatus are maintained, keeping them in safe operating condition and ready for immediate response.

One of the things he does to keep the fleet operating is pressure testing the pumpers on the trucks. 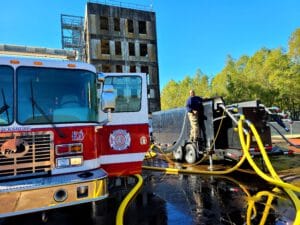 Last week, Randolph performed annual pressure testing on each truck in the VFD’s fleet. Every truck was tested, including some with the ability to deliver up to 2,000 gallons of water per minute.

The oldest truck in the fleet, Reserve 2, failed its test early in the week. Randolph was able to make repairs, and now the truck actually delivers higher water pressure than it did in its test last year. 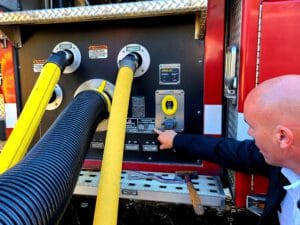 Chief Dancyk points out the pressure specs for Engine 8

Randolph has been with the Vicksburg Fire Department for 10 years. He attended Vicksburg High School and is now happily engaged.