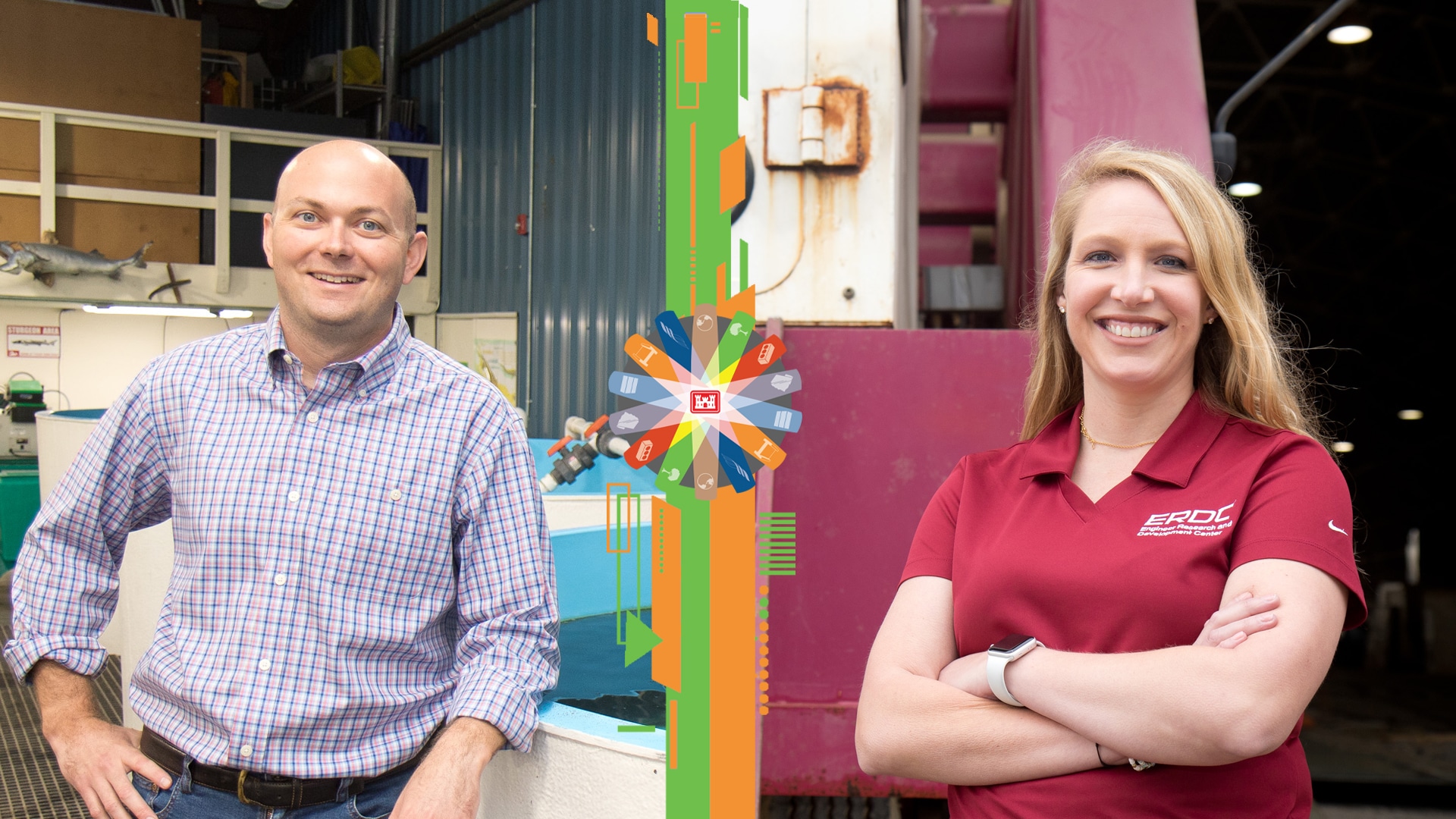 Alan Katzenmeyer, left, and Anna Miller Jordan, right, both got their start at the U.S. Army Engineer Research and Development Center (ERDC) participating in an ERDC-sponsored robotics team while students at Warren Central High School in 2004. Sixteen years later, the two hold supervisory branch chief positions in their respective laboratories, and they credit their successful careers to a solid foundation with the robotics program. (Photo Courtesy ERDC)

VICKSBURG, Miss.— At Anna Miller Jordan’s very first robotics team practice as a high-school senior in 2005, she was deemed responsible for piloting a robot to shoot balls into a net, once her classmate Alan Katzenmeyer steered the bot down the court toward the goal.

Now, 15 years later, Jordan and Katzenmeyer are both still leading teams at the U.S. Army Engineer Research and Development Center (ERDC). But today, instead of high-school peers, those teams are made up of scientists, engineers and researchers working to solve some of the nation’s toughest challenges.

“At that first practice, Alan and I had our whole team dependent on us for success, and that’s really where we are now,” Jordan said of the new positions that she and Katzenmeyer now hold. “We’re both in supervisory roles where we’re trying to lead our team to success, and they’re leaning on us.”

Jordan, who began her ERDC career as a student worker in the Geotechnical and Structures Laboratory, was named chief of the lab’s Airfields and Pavements Branch in October 2020. That same month, Katzenmeyer, who got his ERDC start as a contract lab and field biologist in the Environmental Laboratory, was named the new chief of the same laboratory’s Aquatic Ecology and Invasive Species Branch.

“I always knew I had an interest in working outdoors,” explained Katzenmeyer, who earned bachelor’s and master’s degrees from Louisiana Tech University in environmental science and environmental biology, respectively. “ERDC opened that door for me to see that biology isn’t just one subject; there are so many different avenues you can take.”

And though he’s no longer driving robots down a basketball court, Katzenmeyer still constantly uses the lessons he learned in robotics, even in his fisheries studies.

“It was a great introduction to how you look at a problem and build something to solve that problem in the most efficient way possible,” Katzenmeyer said, noting that he often finds himself operating an underwater autonomous vehicle, water quality monitoring systems and many more electronic tools to accomplish his research. “Understanding the basics of how software interfaces with hardware is critical to my job; I have to be able to make a machine actually do what I tell it to do.”

Both 2006 graduates of Vicksburg’s Warren Central High School, Jordan and Katzenmeyer got involved with robotics because they had friends in the program who said it was fun, and they were interested in learning a little more about it.

During the program, thousands of teams across the country were given the same kit of parts, as well as the same goal to achieve. The way they optimized the system and built their robot to accomplish the mission was up to each individual team, and winners were determined at competitions throughout the year.

“We had a problem and had to figure out how to build a solution,” Jordan said, remembering her after-school days in robotics. “To me, it was very intriguing, and that’s exactly what we do out here now at ERDC. That same idea is applied here every day.”

Just as Katzenmeyer always knew he wanted to work outdoors, Jordan always knew she wanted to be an engineer. But the opportunity to see ERDC’s innovative research up-close made all the difference for her.

“I always thought, ‘I’ve lived in Vicksburg my whole life, I’m not staying,’” Jordan remembered. “When you realize the work (ERDC) is doing for the warfighter, it’s just mind-blowing. What other place can you do things like that?”

“Here at ERDC, it’s not all equations and behind-the-computer work. We still have to apply the science, but we do a lot of hands-on experiments and demos, and that’s the fun part,” Jordan said. “Participating in a program like robotics could be eye-opening; it could change your perspective. Some kids are just sitting in class and being thrown equations, but getting out here and doing some hands-on work helps you realize what ERDC is about, what science, technology, engineering, mathematics (STEM) is really about.”

Katzenmeyer agreed with Jordan, and he, too, would encourage any student who might be interested to give STEM programs a shot.

“No matter what you do, it’s great to have that baseline knowledge,” Katzenmeyer said. “It’s great to know just a little bit about as many fields as you possibly can, and it gives you a chance to see what’s out there. Even though I didn’t pursue what you would call a ‘classic’ robotics role, it had a major influence over what I do day-to-day.”

“Alan and Anna’s story shows that ERDC’s STEM outreach efforts truly make a difference in students’ lives and in our community,” said Speler Montgomery, talent acquisition program manager for ERDC. “From volunteering to be a science fair judge, participating in e-CYBERMISSION, GEMS and other STEM camps and volunteering with robotics, ERDC is changing lives and preparing our youth for STEM careers and to be future STEM leaders.”

For more information about how to get involved with STEM programs like robotics or Gains in the Education of Mathematics and Science, also known as GEMS, contact ERDC’s education outreach office at [email protected].

The above article has been republished with permission. View the original here.

The Highway 61 Challenge to make its way through Vicksburg