It all started over a pink Huffy bicycle with training wheels. 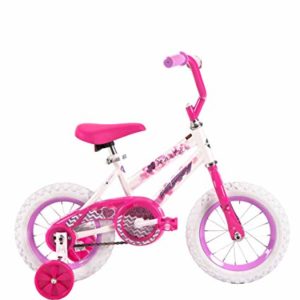 Tuesday afternoon, police were called to a disturbance near First East. A man and woman were upset over a child’s bicycle that had been stolen, and they heard it was in that area. They confronted the people they thought had stolen the bike. Things went bad and the police showed up to keep the peace.

Yesterday, their search for the bicycle went to a home at the corner of 2nd North and Clay Street.

The house on Clay and 2nd North

According to the occupants of 1232 2nd North Street, they answered the door to an angry Antwon Jacobs, who demanded his bike back. They told him it wasn’t there, and told Jacobs he could search the house if he wanted. Jacobs did, but didn’t find the bike. It wasn’t there.

“We told him we didn’t have the bike. We let him look everywhere,” said Michelle Myles, who lives in the house. “We let him know that if we saw the bike we would tell him.”

Addison Myles, 12, is concerned for her family’s safety.

Jacobs walked down the steep steps still arguing with the family on the porch. When Jacobs got to the car his girlfriend, Xavier Anne Earl “… kept talking. She was telling him, ‘You gonna let ’em do you like that? It’s gonna be like that?'” reported Myles.

Michelle Myles explains her family’s side of the story to Vicksburg Daily News.

The video at the end of this report shows Jacobs angrily talking to his girlfriend and then back at the family on the porch. 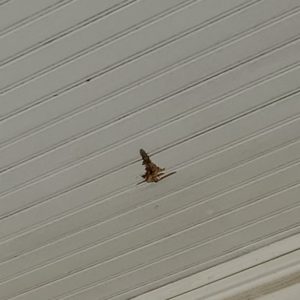 This 9mm passed through the porch ceiling and into the front room where it bounced off that ceiling and terminated in the far wall.

Myles said her family headed back in the house. “We was done,” she said.

That’s when they heard a gunshot and instinctively dove to the floor. “I don’t know where the first shot hit,” Myles said. “I had an infant in the house, six months old. I keep children, it’s how I make my money. Today that mom didn’t drop the baby off. No one did. I’m outta business because of this.” 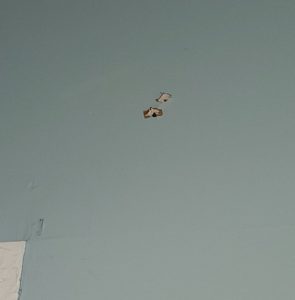 The inside wall where a bullet came through.

Myles said three shots were fired toward the house. She went on to say that people speculating on social media about her situation were not necessary.

“They don’t know what happened and try to make it out like we were drug dealers by saying it was a raid. We got shot up, and they are talking that mess,” she said, adding, “They’re wrong, but I’m going to pray for them anyway.”

Antwon Jacobs is currently in the Madison County Detention Center. He will face a judge Friday morning, charged with a drive-by shooting, shooting into an occupied dwelling and three counts of attempted aggravated assault. 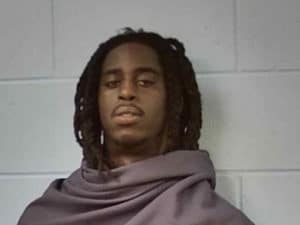 Xavier Anne Earl is also in police custody, and will be charged with a drive-by shooting. 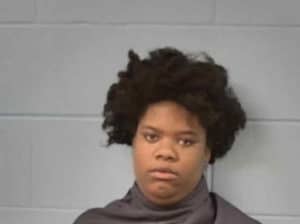 The video below shows the tail end of the event. Jacobs is on the far side of the red vehicle, and Earl is on the near side in the upper left corner. You can see Jacobs come back to the car and seemingly yell towards the house. Earl can be seen getting in and out of the car yelling and gesturing.