The Food and Drug Administration authorized a second COVID-19 vaccine for emergency use Friday. About 5.9 million doses of the Moderna vaccine will be shipped from coast-to-coast starting Sunday.

“This to me is a triumph of multiyear investment in biomedical research that culminated in something that was not only done in record time, in the sense of never before has anybody even imagined you would get vaccines to people in less than a year from the time that the sequence was made known,” Fauci said.

“This is an example of government working,” he added. “It worked really well.”

The Moderna vaccine is similar to the Pfizer vaccine, which received the FDA’s emergency approval last week. It does not require ultra-cold storage, however, making it a bit easier to distribute to remote rural areas. Both vaccines require two shots about three weeks apart.

Health care officials emphasize that Mississippians need to continue taking precautions to limit the spread of the virus. Of particular importance now is avoiding holiday parties and social gatherings with people outside of immediate family or household. That includes sporting events, in-person church services, weddings and funerals. In addition, wearing a mask in public, keeping 6 feet of social distance and practicing good hand hygiene continue to be essential.

Warren County reported 33 new cases Saturday. The 14-day total of new cases is 372, putting the county well into Gov. Tate Reeves hot spot definition that brings with it the probability of increased COVID-19 restrictions. The county has been within the governor’s parameters since Dec. 8. The number of cases reported so far in December, 515, is nearing July’s total of 521. If current trends continue, the county will see more than 800 new cases in December.

The last time Mississippi reported fewer than 1,000 new cases in one day was Nov. 24, 25 days ago. The state reported 1,700 new cases Saturday. Eleven of the first 19 days in December have seen more than 2,000 cases per day.

With nearly 39,000 new cases reported so far in December, the state will see more than 63,000 cases by the end of the month if the current trend continues. That number will obliterate the previous monthly high of around 33,000 set only last month and the July surge of 31,500 cases. State health officials expect cases to go even higher in January after the Christmas and New Year holidays and are urging Mississippians not to hold parties or other large gatherings that include people not in their immediate families.

Nationally, the cumulative cases in the U.S. have soared to more than 17.5 million, and the rates of infection, hospitalization and deaths continue to rise. The number of people who have died in the U.S. since the beginning of the crisis numbers nearly 314,000.

At least 2,805 people died of the virus Friday in the U.S. At least 251,343 new cases were reported, a new one day record. As expected, the rate of deaths is increasing steeply after a surge in new cases. Deaths have increased 26% in the past two weeks, while cases have gone up about 19%. The number of people hospitalized across the nation is nearing 115,000.

In Warren County, MSDH reported 33 new COVID-19 cases Saturday and no new deaths. The cumulative number of cases in Warren County to date is 2,302, and the county’s death toll is 68. The seven-day average of new cases in the county is 27.7 per day, nearly six times higher than in early November when the average was about five cases per day.

Statewide, MSDH reported 1,700 new COVID-19 cases Saturday, bringing the total cumulative confirmed cases in Mississippi to 192,111. The seven-day average of new cases is 2,023 per day, about 60% higher than the seven-day average a month ago, when the state’s numbers were already on the rise. The current averages far outstrip the numbers seen at the height of the last surge in July.

At the beginning of the crises, the age group with the most COVID-19 cases and deaths were those over 65. Now, most new cases are seen in younger people who are more likely to survive the virus. In December, the age group reporting the most cases in Mississippi are from 25 to 39 years old followed by those 50 to 64 years old.

Of the 36 deaths MSDH reported Saturday, 16 occurred between Dec. 8 and Dec. 18 in the following counties:

An additional 20 COVID-19 related deaths occurred between Nov. 21 and Dec. 10 and were identified from death certificate reports.

New cases and deaths were reported to MSDH as of 6 p.m. Friday, Dec. 18. MSDH usually reports statistics on the COVID-19 coronavirus each day based on the previous day’s testing and death reports.

The number of Mississippians hospitalized for the virus as of 6 p.m. Thursday, Dec. 17, was 1,318. The number includes 1,252 with confirmed cases of COVID-19 and 66 people with suspected but unconfirmed cases. Of those with confirmed infections, 319 were critically ill and in intensive care units and 190 were on ventilators. 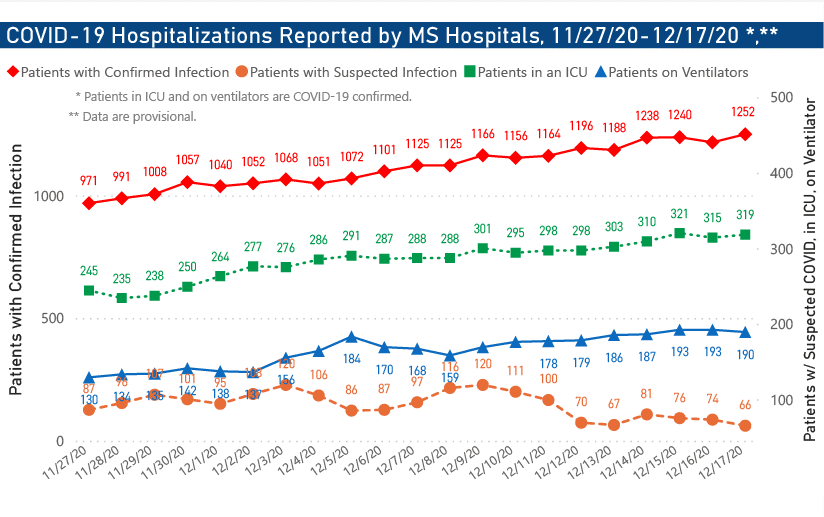 MSDH has estimated the number of people who can be presumed recovered from COVID-19 in Mississippi. That number is 148,466 through Sunday, Dec. 13. It represents about 77.3% of the cumulative 192,111 cases reported as of Saturday, Dec. 19.

The total number of Mississippians tested for COVID-19 (PCR and antigen tests identifying current infections) as of Saturday, Dec. 12, is 1,550,198 or about 52.1% of the state’s 2.976 million residents. MSDH reports statewide test results once a week. Without daily updated numbers of tests, it is impossible to accurately calculate Mississippi’s positivity rate (positive results to tests, seven-day average); however, the estimated rate was 22.1% Friday, according to Johns Hopkins University. The national rate is 11.2%, and 5% or lower indicates adequate testing.